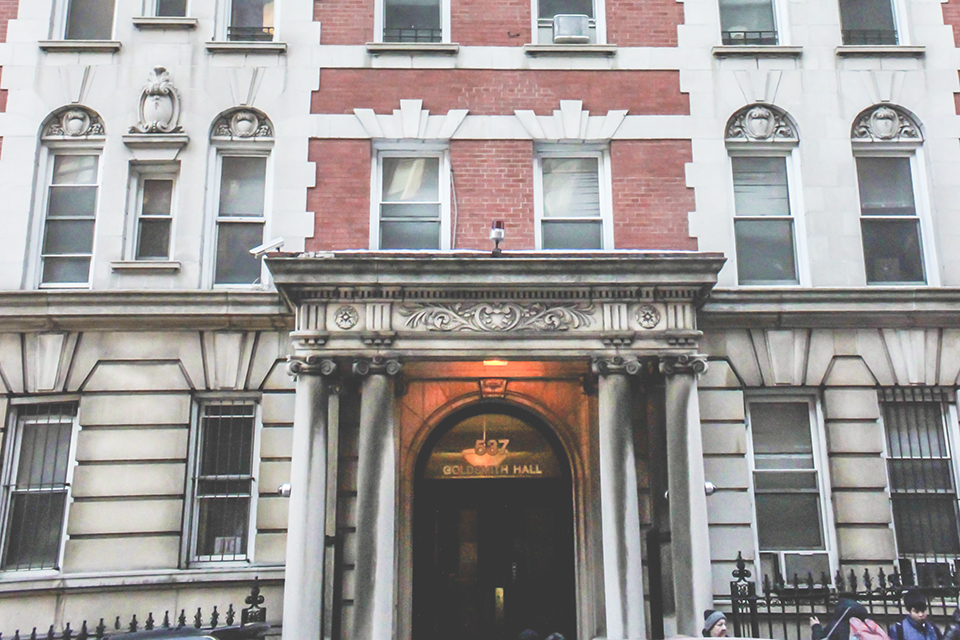 Horace W. Goldsmith Hall is one of the dorms Jewish Theological Seminary will sell to fund renovations.

The Jewish Theological Seminary plans to sell two of its three dormitory buildings this summer to fund campus renovations, including the construction of a new library.

Chancellor Arnold Eisen announced the sale of Mathilde Schechter Residence Hall at 121st Street and Broadway and Horace W. Goldsmith Hall at 121st Street and Broadway to the student body in a town hall meeting on Jan. 29. Goldsmith will be renovated and remain in operation as a dorm for the upcoming year, and the third dormitory, Louis S. Brush Residence Hall, will also remain in use.

JTS dormitories house undergraduate students in List College, who are enrolled in the Joint Programs with Columbia's School of General Studies or in the Double Degree Program with Barnard.

"Our undergraduates will benefit from a new residential hall that enhances the sense of community that is at the core of who we are," Eisen said in a statement to Spectator.

While Mathilde Schechter Residence Hall, which houses freshmen and sophomores, won't be in operation after this school year, Goldsmith, which houses upperclassmen, will be renovated to accommodate all List College students, said Elizabeth Heyman, GS/JTS '16 and the vice president of policy on the General Studies Student Council.

"Having everyone in the same building raises new concerns about how to create a family feel in the upperclassmen dormitories," List College Student Council President Molly Heller, GS/JTS '15, said.

Although Goldsmith will house more students next year than ever before, Brett Krasner, GS/JTS '17, said that a more condensed dorm experience might benefit the student body.

"I know a lot of people might not be happy about the temporary solution for the freshmen in Goldsmith, but I think it'll be beneficial to have a full dorm," he said. "It'll bring people closer."

In addition to renovating the dorms, JTS will also demolish and rebuild its library in order to create more meeting space.

"Our world-class library will be more accessible than ever to visitors from New York City and around the world and provide state-of-the-art resources to students and faculty," Eisen said in a statement.

In order to create larger meeting spaces, the new JTS library will have fewer books than the current one, with much of the current collection becoming digitized and the physical books moving off campus.

Students have voiced concerns about the impact of the renovations on the student body's quality of life.

"They say they're going to be able to get us other books within 24 hours, but their administration is not necessarily known for it having a smooth bureaucracy, so we don't know how they're going to handle the library being moved," Krasner said.

Krasner said while incoming students would not be affected by the change, he thought that the short notice about the campus construction was some of the cause of anxiety for current students.

"We didn't know about this in advance, and we were told the night before that we should definitely show up to this town hall because it affects our housing," he said. "So I think students were still getting over the initial freak-out of that."

Correction: An early version of this story stated that Elizabeth Heyman was the Jewish Theological Seminary representative on General Studies Student Council. She is actually the vice president of policy. Spectator regrets the error.