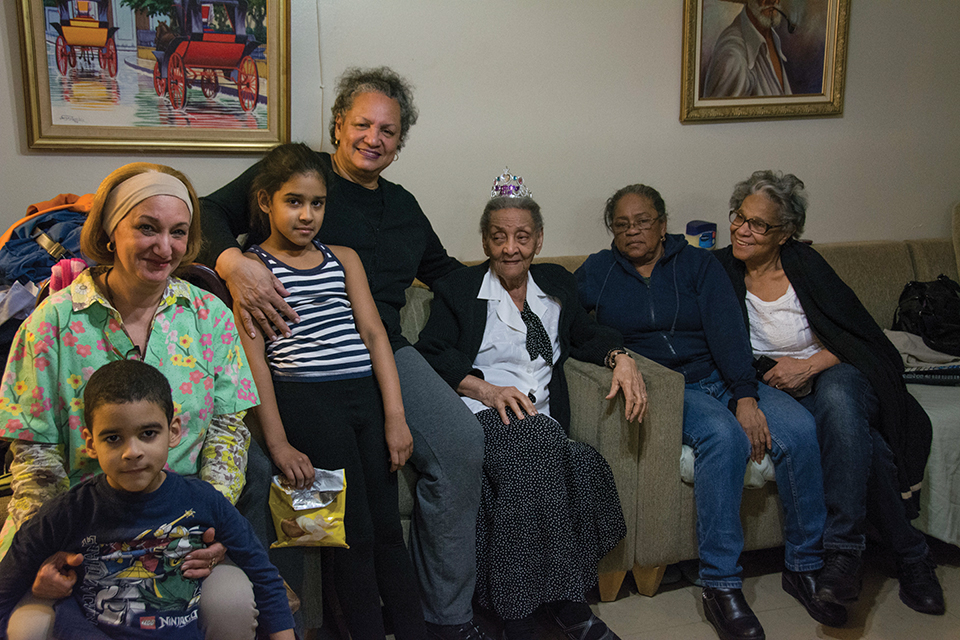 Conditions have been difficult for the Rodríguez family, who live at 3333 Broadway.

Cake, wine, and family filled Magdalen Rodríguez's apartment on Monday evening, as her loved ones gathered to celebrate her mother's 87th birthday.

But Rodríguez, a 27-year resident of a building on Broadway and 133rd Street that previously was an affordable-housing development, said that conditions in her building over the past decade have not given her much cause to celebrate.

For Rodríguez, the main point of contention has been a broken sink. Until three weeks ago,  management had not responded to her requests for repairs for over two years, she said.

"I went to court for a sink that was falling down. And the court ordered them to fix the sink—the whole thing was coming apart," she said. "I have here two kids—seven years old. Also my mom lives here, and she is 87. So it was very dangerous." 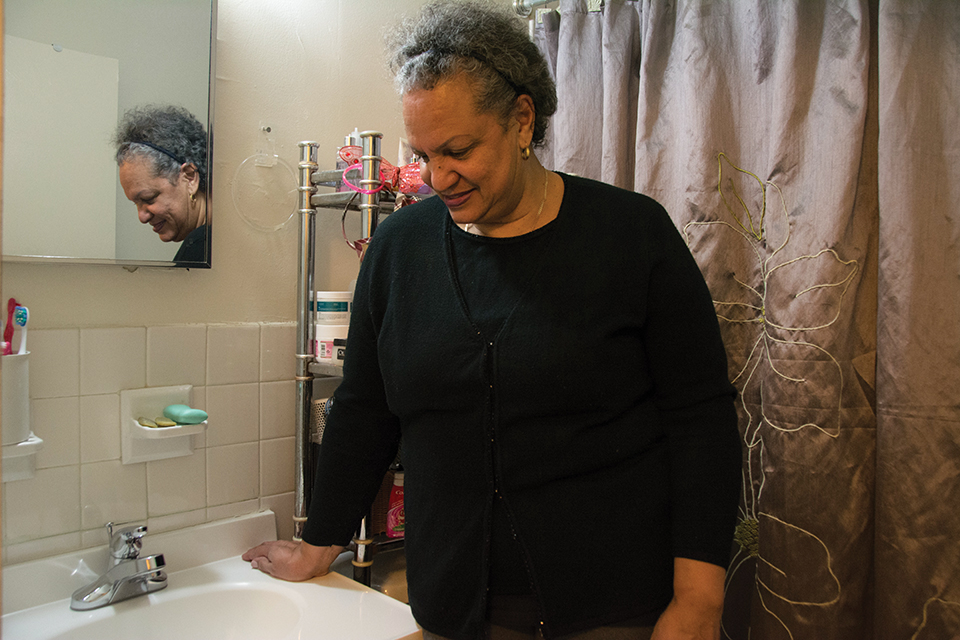 Rodríguez lives in 3333 Broadway, a five-building, 1,250-unit complex that was the largest affordable-housing development in the country when it was completed in 1976. That changed in 2005, when its management opted out of the state-run affordable Mitchell-Lama program and started offering apartments at market rate.

Since then, the building has become a hybrid. Longtime tenants receive government vouchers—known as Section 8 or "sticky" vouchers—while their newer neighbors pay in full.

Though the vouchers were offered to avoid displacing tenants living in the building before it transitioned out of Mitchell-Lama, subsidized residents have long complained of unfriendly management, filing a lawsuit alleging systematic harassment in 2008.

Now, a global real estate conglomerate has purchased the five buildings of 3333 Broadway, with an eye toward collecting market rate rents from the influx of students and faculty that the opening of Columbia's Manhattanville campus will bring to the area.

But subsidized tenants residents say new management has not rectified longstanding problems; instead, several accused the owners of using slow repairs and misleading directions to intimidate longtime tenants out of their apartments.

Joseline Fernández and Fernando Valdez have been in the building for 21 years, and live with their three children. To them, recent events in the building seemed tied to Columbia's expansion.

"We have been here for many years, so they are moving us from an apartment to a smaller one," Fernández said in Spanish. "They want to kick us out. And they want to get in new people from the University to rent them [the rooms] more expensively."

Since 2007, 3333 Broadway has been managed by Urban American, a company which maintains residential buildings in New York and New Jersey.

Then, in August, Brookfield Property Partners bought 3333 Broadway. Brookfield is a global real estate conglomerate which operates office, retail, multifamily and industrial properties in the U.S., Europe, Canada, China, Brazil, Australia, and the Bahamas. Its assets are worth over $95 billion.

In a presentation for their 2014 Investor's Day, Brookfield directly identified Columbia's expansion into Manhattanville as a reason for the acquisition.

Slide 28 of the presentation states Brookfield purchased 3333 because the building was "priced well below replacement cost in high barrier-to-entry market with significant upside catalysts."

The same slide lists the "Columbia University expansion" as the first among three catalysts. 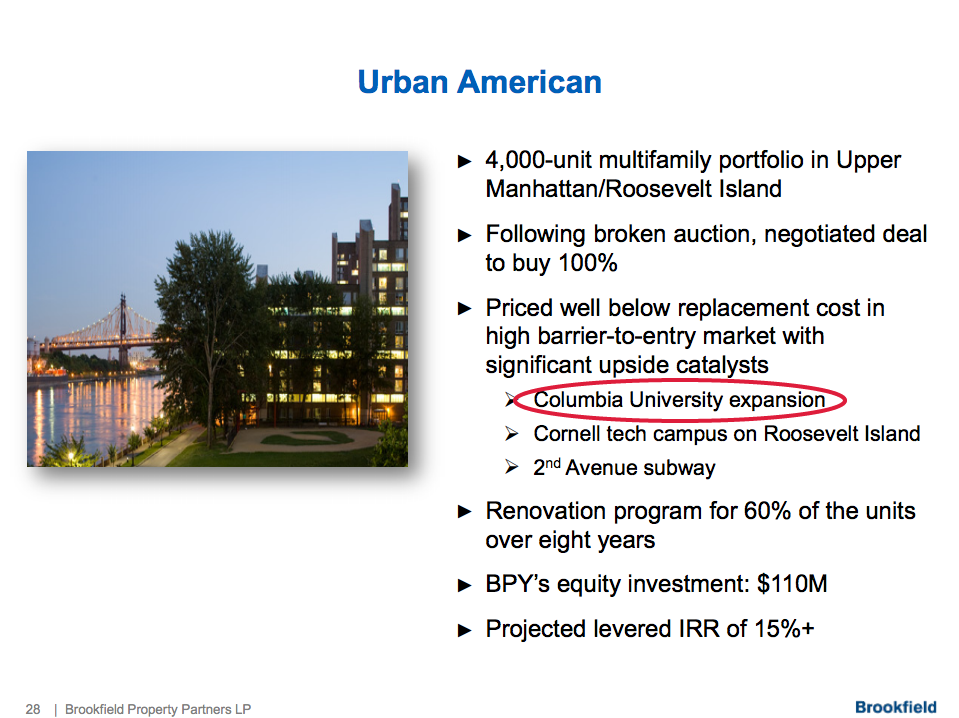 A statement from Brookfield also said that proximity to Columbia motivated Brookfield to invest in the property.

"We are very excited to be part of this wonderful community and the activity in the neighborhood being driven by Columbia and City College," the statement from Brookfield read. "At 3333 Broadway, we were proud to invest in the building with Urban American and, together, we are committed to maintaining and improving the building for the more than 1,000 families who call it home."

Barbara Stevenson, a subsidized tenant who has lived in the building for 17 years, said issues with management worsened as Columbia began work on the Manhattanville expansion.

"That's when everything started happening," she said.

Stevenson said that she did not expect Brookfield to change the pattern of negligence towards subsidized tenants.

"Every new management that comes in goes with the flow," Stevenson said. "It's the same story."

For Fernández, the changes in ownership have been confusing.

"Before there were certain owners, now there are others," she said. "We don't know where we are going to end up."

In the meantime, many subsidized tenants said they have struggled to convince management to repair broken utilities in their apartments.

While a spokesperson for Brookfield said it is company policy to rapidly repair leaks in the building, management did not respond directly to inquiries about delayed repairs for subsidized tenants.

According to Stevenson, subsidized tenants' requests for maintenance are routinely ignored.

"If your stove is not completely busted, you're not getting that," she said. "If you pay full market rent, you're good."

Fremio Arias, a 12-year resident under Section 8, said he had to wait for three months before a leakage in his bathroom was fixed.

Rodríguez said that, rather than wait for repairs, she had bought her own appliances.

"To us, they don't do it. I had to buy my own refrigerator, my own stove, everything is mine."

Brian Paetzold, who moved to 3333 Broadway in August from Brooklyn, pays market rate for his two-bedroom apartment.

According to Paetzold, his apartment was fully renovated when he moved in, though some issues persist.

"There's still problems, like ants and stuff like that. But, for the most part, it's been pretty good."

However, not all tenants are dissatisfied with conditions. Subsidized tenant Miguel Rodríguez, who lives with four family members, said his 14 years in the building have been generally untroubled.

"I haven't had any problems," he said.

He also said he was unaware of management pressuring subsidized tenants to leave so that their apartments can be renovated and marketed to new tenants.

"If there is somebody plotting something in the building, I don't know anything about it."

'Where there is unity, there is strength'

According to Eckl, interaction between subsidized tenants and market-rate tenants in the building is infrequent.

"They're not going to talk to me about it on the elevator, you know what I mean?" she said. "They're like, 'oh, there's one of those girls.'"

Still, several tenants said unity will be crucial as they attempt to deal with the building's management and broader affordable-housing issues in Harlem.

Arias blames the local politicians for what he sees as a broader abuse of low-income tenants by their landlords.

"The people that are supposed to defend us—you know, the senators—aren't doing anything," Arias said.

Fernández also said residents need assistance from outside the building.

"We need to seek help," she said, "because, if not, we are going to stay always in the same [situation], for not speaking out."

One of the first steps, she said, is to increase currently sparse attendance at community meetings that management holds in the building's lobby.

"If we are not united, then we are not going to move at all," she said. "Where there is unity, there is strength."