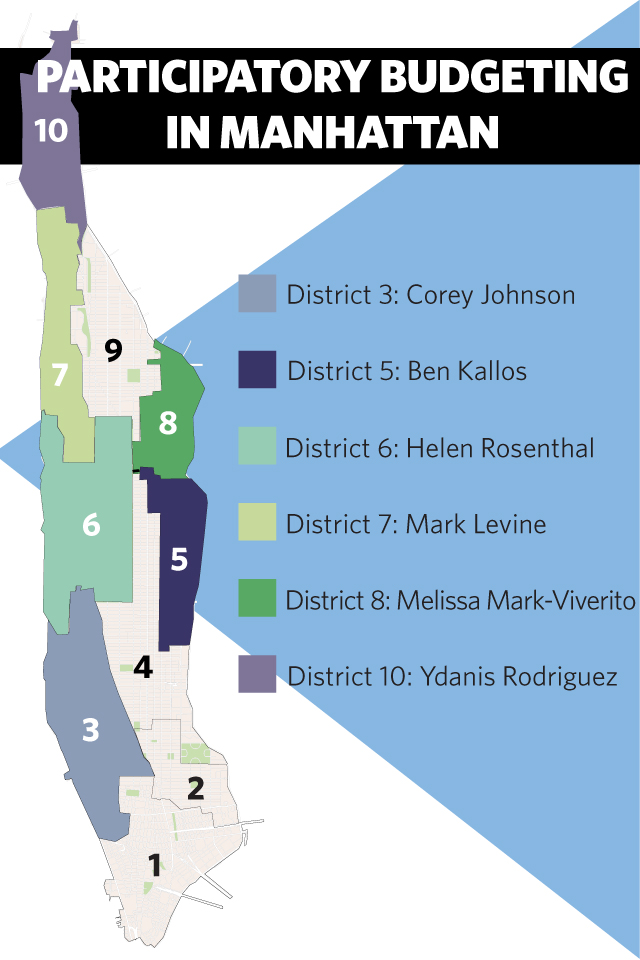 In an attempt to increase Columbia students' involvement with local politics, the Roosevelt Institute hosted a discussion session about a participatory budgeting session last week to give students a chance to voice their opinions on what city discretionary funds should be spent on.

While some Columbia students are getting involved with the local participatory budgeting process, others are concerned about whether college students should have a voice in the wider community.

Mark Levine, Columbia's district councilperson, started using participatory budgeting last year to determine how to best use his discretionary budget for projects that would benefit the community.

In addition to the area surrounding Columbia, Levine's constituency includes lower Washington Heights, Harlem, and a sliver of the Upper West Side. Potential projects funded by participatory budgeting funds include improvements to local schools, roads, transportation, parks, and security.

However, some students are unsure about whether they should be participating in the budgeting process as temporary residents.

"It's unfair for people who have lived here longer," Samuel Place, CC '15, said. "They're the people that the money should go to."

Although there are infrastructure changes—such as decreasing the width of 116th Street at its intersection with Broadway, or converting that extra space into a pedestrian plaza—that would be useful to Columbia students and neighborhood residents, prioritizing changes like these over work elsewhere in Levine's district would not be beneficial to the the majority of the area's residents, Brit Byrd, CC '15, and Roosevelt Institute Senior Fellow for Economic Development said.

For this past participatory budgeting cycle, Byrd himself served as a budget delegate—a volunteer position—on the Streets and Public Safety committee.

"It's kind of like the town hall meetings in the show 'Parks and Recreation.' You get some particularly bizarre scenes, and you learn to navigate them," Byrd said. "It has been informative, and it's different than being in a room of self-identified policy nerds at Columbia."

According to Byrd, students do not have to join assemblies to get involved in the district. More student volunteers would be helpful to District 7, Slattery said in her presentation.

"There's a demand for volunteers and delegates," Byrd said. As Columbia students, "we can give our time since most of us don't work 9-to-5 jobs."

Byrd hopes that this sort of engagement would not make Columbia students feel like they are imposing on the broader community because there are many different kinds of opportunities for student participation within participatory budgeting.

Danny Haidar, CC '18 and who attended the meeting, said he didn't think Columbia students should engage in participatory budgeting because of the potential differences between students' lifestyles and the lives of neighborhood residents.

"I thought, Columbia students should not be putting their noses into this one," he said.

But after Haidar found out students could advocate on behalf of other residents of the district, he realized that participatory budgeting could be a great avenue through which students interested in community impact could get involved.

"I'm trying to find a way to intersect my interests with community service and policy," Haidar said. "Participatory budgeting is a good way for me to do that."