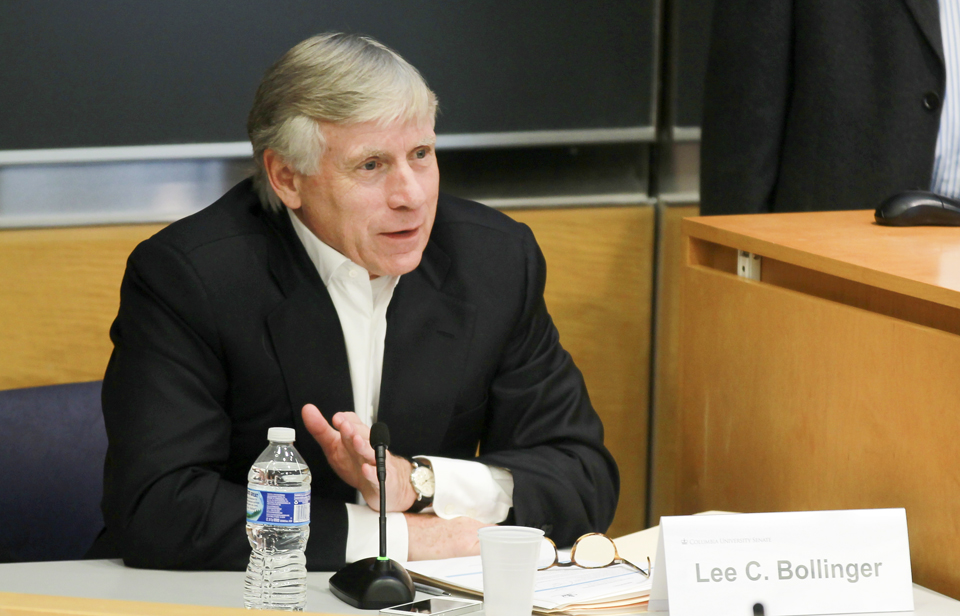 Bollinger spoke with Spectator about the presidential library.

Spectator sat down with University President Lee Bollinger on Friday. Here's what you need to know:

Bollinger said that though he has been in communication with the Presidential Library Foundation, First Lady Michelle Obama's visit to campus with daughter Malia was "strictly personal," and she did not meet with administrators to talk about the library.

"I would be thrilled with any president to have a relationship with Columbia after their presidency, but we'd be definitely thrilled to have the Obamas both on our campus, perhaps in Manhattanville and having an engagement with the institution," Bollinger said. "I'm trying to think about how to build our capacity to more broadly grapple with global issues and very important national issues, to serve as that kind of home for these larger efforts and the Obamas would be fantastic participants and possible leaders."

Following his statement in January that he thinks graduate student unionization is "not necessary," Bollinger addressed arguments from graduate student workers that they should be able to collectively bargain to address issues including late payment, salary, and benefits.

"I understand, those are reasonable arguments—my answer would be we should address all those things. As our students, we should not have you be paid late," Bollinger said.

Bollinger also elaborated on the special relationship he feels students have to the University.

Bollinger added that graduate students would not benefit from unionization.

"I don't believe that if there were unionization we would stop thinking about graduate students as students, but it would complicate the matter in ways that I think would not be beneficial. Furthermore, I don't think they would benefit in ways that they're not now benefitting," Bollinger said.

Bollinger excited for future of Columbia football after new appointments

Bollinger is optimistic that the appointment of the former University of Pennsylvania football head coach Al Bagnoli and Peter Pilling as the head football coach and athletic director, respectively, will succeed in moving Columbia's football program in the right direction.

"You cannot have a program, especially one that's highly visible, that everyone thinks is uncompetitive, that is losing so much," Bollinger said. "It's not good for the players, it's not good for the University, so we really need to overcome that and be supportive."