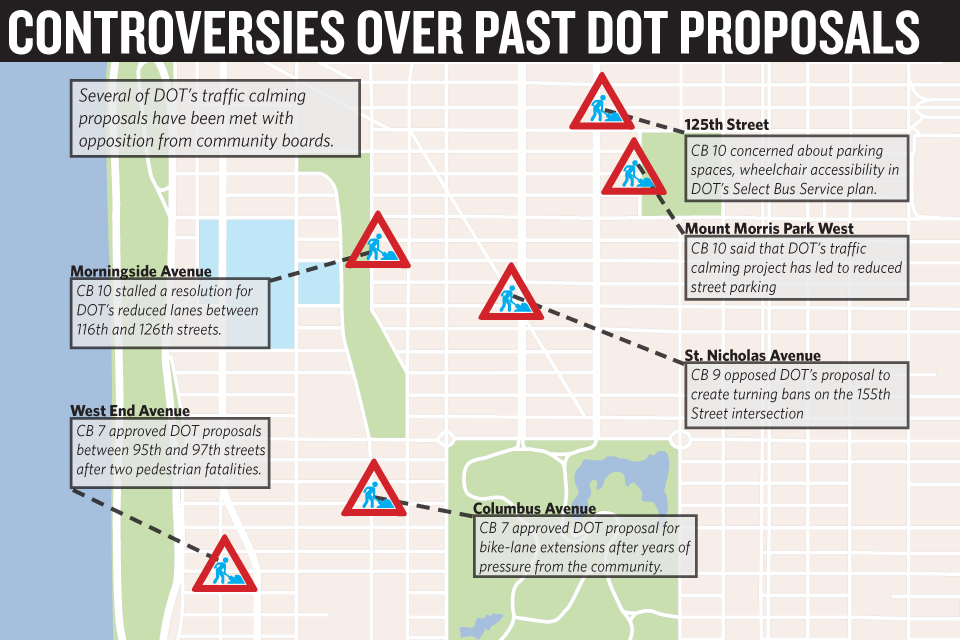 As Harlem and Upper West Side community boards consider new traffic calming measures proposed by the city's Department of Transportation, local traffic safety activists say that community boards' historic resistance to DOT proposals comes from a focus on driver concerns that is out of pace with community priorities.

Over the past four years, community boards 7, 9, and 10 have considered several controversial DOT traffic proposals to calm accident-prone corridors like West End and Morningside avenues.

While community board approval is not legally required for the DOT to carry out a plan, slow community board review processes have in several cases significantly slowed the implementation of traffic calming measures.

Jonathan Kahn, a member of the North Star Neighborhood Association, which includes the area just east of Morningside Park, said that slow review processes are often the result of community boards' attempts to mediate the concerns of motorists and pedestrians in the neighborhood.

"When people are worried about traffic getting slower and they use that as an argument against the plan, transportation advocates see that very same thing—that traffic's getting slower—as a reason for the plan," he said.

"My experience with CB10 is that CBs are averse to change," he added. "I think that change in traffic does have some potential downsides that CBs are scared of."

Kahn worked diligently in support of a DOT proposal for Morningside Avenue, which was finally approved by CB10 in June 2014, nine months after it was introduced in 2013.

Lisa Sladkus, former co-leader of the street safety group Upper West Side Streets Renaissance, said that similar concerns were at play among CB7 members during the five-year-long review process for the DOT's Columbus Avenue redesign proposals, which turned parking spots into bike lanes along 19 blocks of the street.

"Whenever there's change, you have the potential of losing free parking on the streets," she said. "CBs, in their extremely regressive way, do not like to see us lose any free parking on our streets."

Martin Wallace, a member of CB9's Transportation Committee, said that the community boards' concern for drivers is out of balance with the community's priorities.

According to the New York City Economic Development Corporation, fewer than 25 percent of residents of West Harlem own cars.

City Council member Mark Levine also said that pedestrian safety, not traffic flow, is the priority for most neighborhood residents.

"The fact is that the vast majority of people who live in uptown Manhattan are not getting around by driving everywhere," Levine told Spectator. Levine petitioned last week for the DOT to extend bus lanes on 125th Street west of Lenox Avenue.

Traffic safety activists said that the DOT's traffic calming measures have not had negative effects on motorists.

According to Kahn, CB10 resisted the implementation of Select Bus Service because of concerns about the system's effect on parking and traffic on 125th Street.

However, Levine said that the bus lane did not actually result in any negative consequences for drivers.

"The community has seen what an incredible difference it has made to bus speed. In fact, there was no net loss of parking," Levine said. Data from the DOT shows a 33 percent increase in bus speed along 125th Street following the addition of dedicated bus lanes.

Levine said that the DOT changes eased traffic, even for motorists.

"I don't think DOT street improvements on any of the projects uptown have been anti-car. In fact, it's smoothed car travel in most cases," Levine said.

Kahn said this was also the case for the Morningside Avenue renovations, which were repeatedly stalled by CB10 opposition.

"From the day it's been implemented, there hasn't been any noticeable increase in traffic. The DOT plan was a huge success," said Kahn.

"The DOT's attitude is they want to be able to show they've done something concrete. They are in the position of having to react to de Blasio's program to do away with pedestrian fatalities," said Kovaleff. "If they have something filled out like that, they can say, 'See, here's what we've done.' I'm not at all positive that some of their ideas are all that great."

Kovaleff is one of the CB9 members who is opposed to a current DOT plan to reduce speeding on Riverside Drive. Kovaleff is concerned that the plan will cause congestion.

Transportation activists said that DOT proposals are well thought out and are generally responsive to neighborhood needs.

"DOT is coming from a professional perspective. When they say speeding is rampant, they always have a number to back it up," J.P. Partland, a local bike lane activist, said.