Five notable possible proposed revisions to the Rules of Conduct

Five notable possible proposed revisions to the Rules of Conduct 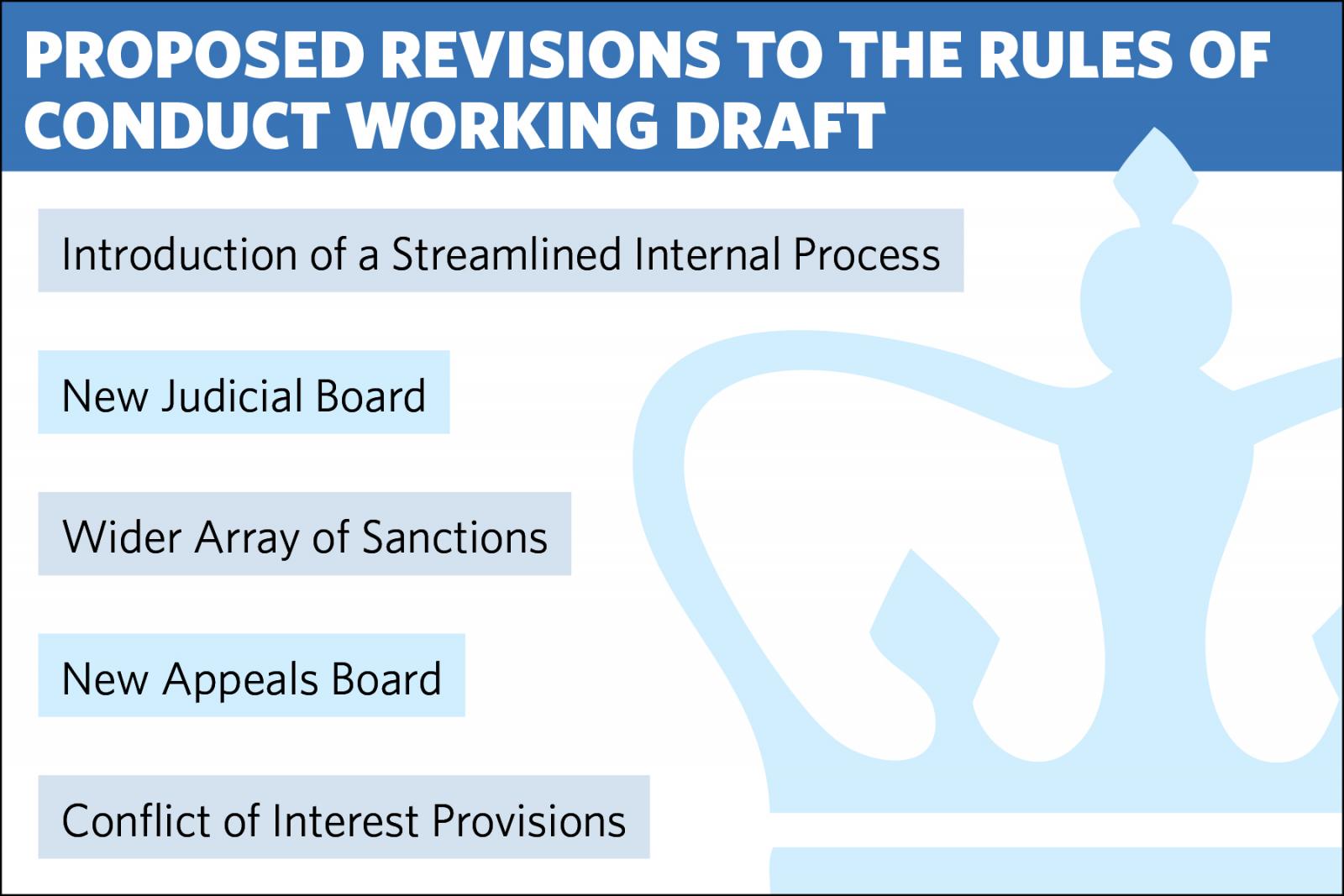 The Rules of Conduct, which provide "special, disciplinary rules applicable to demonstrations, rallies, picketing, and the circulation of petitions," are currently under review for the first time in 22 years.

Co-chairs of the University Committee on the Rules of Conduct Senator Zila Acosta, CC '11, Law '15, and Chris Riano, GS '07, presented a summary of a tentative first draft of their revisions to the Rules at Friday's University Senate plenary.

Acosta said a finalized draft would be released before the committee holds an open town hall to discuss the proposed revisions on April 17. The University Senate will then vote on the revisions. If the draft is passed, the Board of Trustees must approve the changes before they go into effect.

It was unclear from the presentation if the committee will introduce more revisions, but Acosta and Riano focused on explaining how the committee proposed the adjudication process would work. Here are some noteworthy potential proposals:

Introduction of a streamlined internal process

The central change within the revisions is the proposal of a new internal hearing process. This single procedure would replace the current disciplinary process that involves a Rules Administrator who refers students to either Dean's Discipline or an external hearing process. All Columbia members charged with violations of the rules would go through the same internal process.

The internal process would be adjudicated by a new judicial board comprised of five members, including at least one student, one faculty member, and one administrator. The proposed change stipulates that the remaining two members would be from any of the three categories—student, faculty member, or administrator. The judicial board would take the place of the current hearing officer position.

Senator Marc Heinrich, CC '16, urged the committee to fill the other two seats with a student and faculty member.

"The other two have not been delineated. I strongly urge the board to make it clear, maybe recommend two faculty and two students," Heinrich said. "Especially considering that the appeals board has all administrators, we might want extra representation."

University President Lee Bollinger had previously expressed interest in the adjudication of an internal process by a student-faculty board in an interview with Spectator.

"I probably would favor moving towards a more robust internal system of resolution or adjudication...I would rather have a student-faculty panel within the University," Bollinger said. "That's probably my preference but I haven't gone through the full discussion of analysis."

If either the respondent or the rules administrator is unhappy with the hearing results, either party would have the opportunity to appeal the ruling. All appeals would be judged by an appeals board comprised of a three-person panel of deans.

The proposed revisions include conflict of interest provisions that would prevent the dean of a student's school to serve on that student's appeals panel.

The revisions would provide the judicial board with a greater array of sanctions to choose from, depending on the level of offense. University members charged with simple violations may be sentenced to new sanctions such as community service, removal from University housing, or restricted access to university facilities.

Additionally, two new sanctions have been added for serious violations: "dismissal or restriction from University employment" and "revocation of degree."