Attorney and low-income tenants feud over accusations of legal misrepresentation

Attorney and low-income tenants feud over accusations of legal misrepresentation 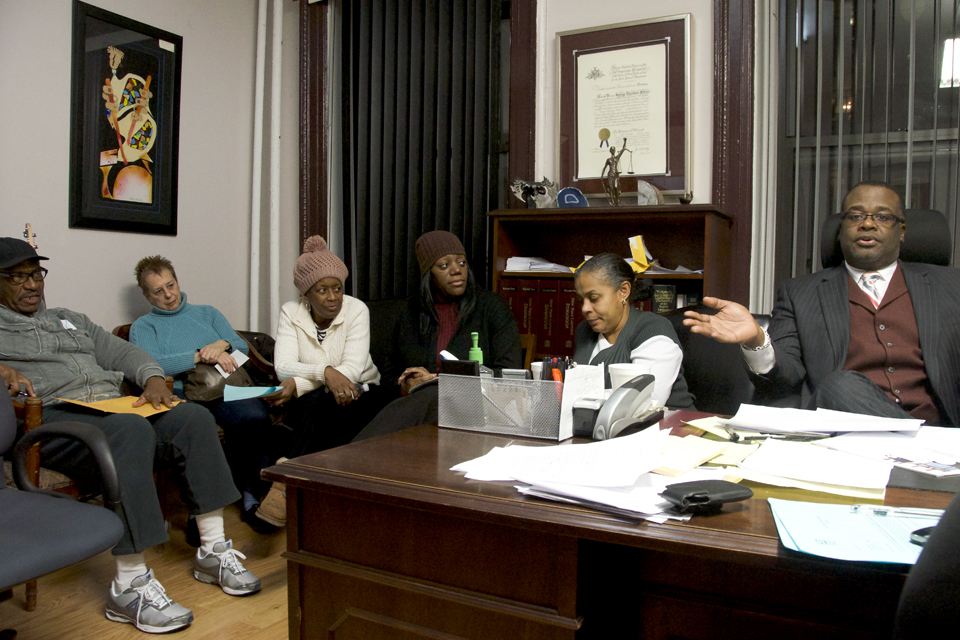 Last February, at an early meeting of HCAD, Peters expressed hope for their case, which his former clients now say he later abandoned.

After keeping silent for months for fear of legal reprisal, a support group for low-income tenants is coming forward about their former lawyer's alleged mishandling of hundreds of tenants' cases.

Attorney George Peters, who represented the Housing Coalition Against Downsizing in a lawsuit against the Department of Housing Preservation and Development last year, has been accused of offering inconsistent and inadequate representation and of owing upward of $30,000 in legal fees to his former HCAD clients. Peters denied any legal malpractice in an interview with Spectator.

HCAD, a group of tenant associations from subsidized housing complexes in Manhattan that includes 3333 Broadway on 134th Street, was founded in December 2013 in response to an HPD policy the group called "downsizing."

That policy, which was implemented after the federal sequester stripped the HPD of funds, moved tenants who received housing vouchers into smaller apartments.

Peters, a private lawyer working in upper Manhattan, agreed to represent HCAD in October 2013 and proposed that the group file an Article 78 proceeding—used to appeal the decision of a New York State agency—to demand that the HPD immediately stop downsizing tenants.

Unlike in criminal court proceedings, lawyers are not automatically made available to tenants in housing court cases, a fact that often forces tenants to pay lawyers or face the prospect of representing themselves.

After HCAD agreed to file an Article 78, Peters collected $31,000 in legal fees from tenants of the seven buildings that were part of HCAD at the time. Nearly 100 tenants paid him for his legal services.

But Bridgette Scott, president of HCAD and the tenant association at the Miles and Parker complexes, said that Peters did not show the Article 78 to his clients before filing it.

She said that the petition ended up "weak" because it did not focus on tenants from the groups most negatively affected by the downsizing policy, such as senior citizens and people with severe medical illnesses.

"It should have been seniors with medical health issues … Single parents with [children of] the opposite sex," Scott said.

But Peters told Spectator that the court case he drafted was strong.

"They used a good strategy that I came up with," Peters said.

Still, both Peters and members of HCAD said that after the Article 78 was filed, Peters lost confidence in HCAD's ability to win the case.

Tuck Milligan, president of the tenant association at Glen Gardens, an apartment building on 87th Street and Amsterdam Avenue, and then-member of HCAD, said that last summer, Peters started expressing doubts as to whether the hearing would be successful. Many HCAD tenants' hearings with HPD were scheduled for early June.

"All is in the wind, because our attorney doesn't think he can do this," he said, recalling his feelings about the case last summer.

Peters, meanwhile, said that his confidence in the case began to diminish when he found out that the downsizing policy was a result of federal budget cuts and citywide lawmaking. He said that at that point, he realized that stopping downsizing as a whole was an unrealistic objective for HCAD and his firm.

But Scott said that Peters was not hesitant in the beginning of the proceeding, and that he did not share his doubts with HCAD early enough.

"You said this case was winnable, doable. And all of a sudden you say it's not valid," Scott said.

Milligan and Scott accuse Peters of becoming increasingly elusive and failing to answer phone calls and emails from HCAD regarding the legal strength of the Article 78 and whether he thought they should still go through with it.

"And then he disappeared … It became a questionable, if not a foggy issue," Milligan said.

Peters denies that he was unresponsive during this period, and pointed to the large number of tenants he was representing.

"I told them from the beginning: I can't handle all of this bandwidth," he said.

Despite his dwindling faith in the case, Peters was still accepting fees from his HCAD clients at the time, like a check from Glen Gardens resident Elliot Levkov for $250 deposited on May 20, two weeks before the scheduled hearing.

Because of Peters' reluctance to follow through with the Article 78 and a fear that a loss in court would set up a precedent for other appeals against downsizing, HCAD decided to withdraw the appeal on May 29. The group requested that Peters return all the paperwork related to the case.

HCAD members said that shortly thereafter, Peters withdrew from representing them altogether in an email that he sent only to Scott.

"I hereby withdraw as legal counsel for HCAD, our attorney-client relationship is officially severed … As the HCAD paperwork appears to be more than 3,000 pages it will take some time to copy all of the documents. I provided a copy of the withdrawal papers yesterday. I, obviously, will not attend any more HPD hearings. Good luck!" the email read.

But Peters claims that HCAD actually fired him, and that the email was sent after he had been suddenly dismissed.

He added that after firing him, HCAD attempted to get his representation back.

"After firing me and realizing they did something wrong, they told me to come back. And I was like 'I ain't coming back,'" Peters said.

Many HCAD tenants had individual hearings in housing courts with the HPD that week. These tenants were informed in court that Peters was no longer their attorney, but Peters and Scott hold each other responsible for not passing around this information.

HCAD proceeded to request a refund of the legal fees alleging he did not draft a strong court case and generally mishandled the case. In an email to Scott, Peters refused to return the nearly $31,000 in legal fees, stating that he had carried out his representation adequately.

Since then, the uncertain existence of a retainer agreement—a one-time contract between an attorney and the client—has since prevented HCAD from taking legal action against Peters.

"We had no documentation. The only thing we had were emails," Scott said.

Peters said that while documentation exists, it is thousands of pages long, and could not be produced at the time of this article.

Currently, Scott said that only three building complexes are actively part of HCAD—3333 Broadway on 134th Street, the Miles and the Parker on 122nd Street and Lexington Avenue, and Metro North on 101st Street and First Avenue. The group has not met in months.

However, many tenants who were represented by Peters are still frustrated and have voiced their determination to get a refund of the legal fees and submit a complaint to the New York State Bar Association, a professional body of 75,000 lawyers in the state, of which Peters is a member.

"You're telling me if a lawyer steals your money, you can't get your money back?" Regina Schoenholt, a tenant of Glen Gardens, said. "He took advantage of people's desperation."

Since late 2013, the HPD's rate of downsizing, which Scott said was "rampant" at first, has slowed, and tenant efforts to resist have lost momentum accordingly.

Both Scott and Peters, though, said that putting aside its legal difficulties, HCAD's efforts have helped many people, especially senior citizens, keep their apartments.

"Due to what we have done, the seniors are safe," Scott said.

But Scott added that even though HCAD's appeal to the Bar Association was unsuccessful, Peters must still be held accountable.

"[They were] working, income-struggling poor. How dare you?" Scott said.