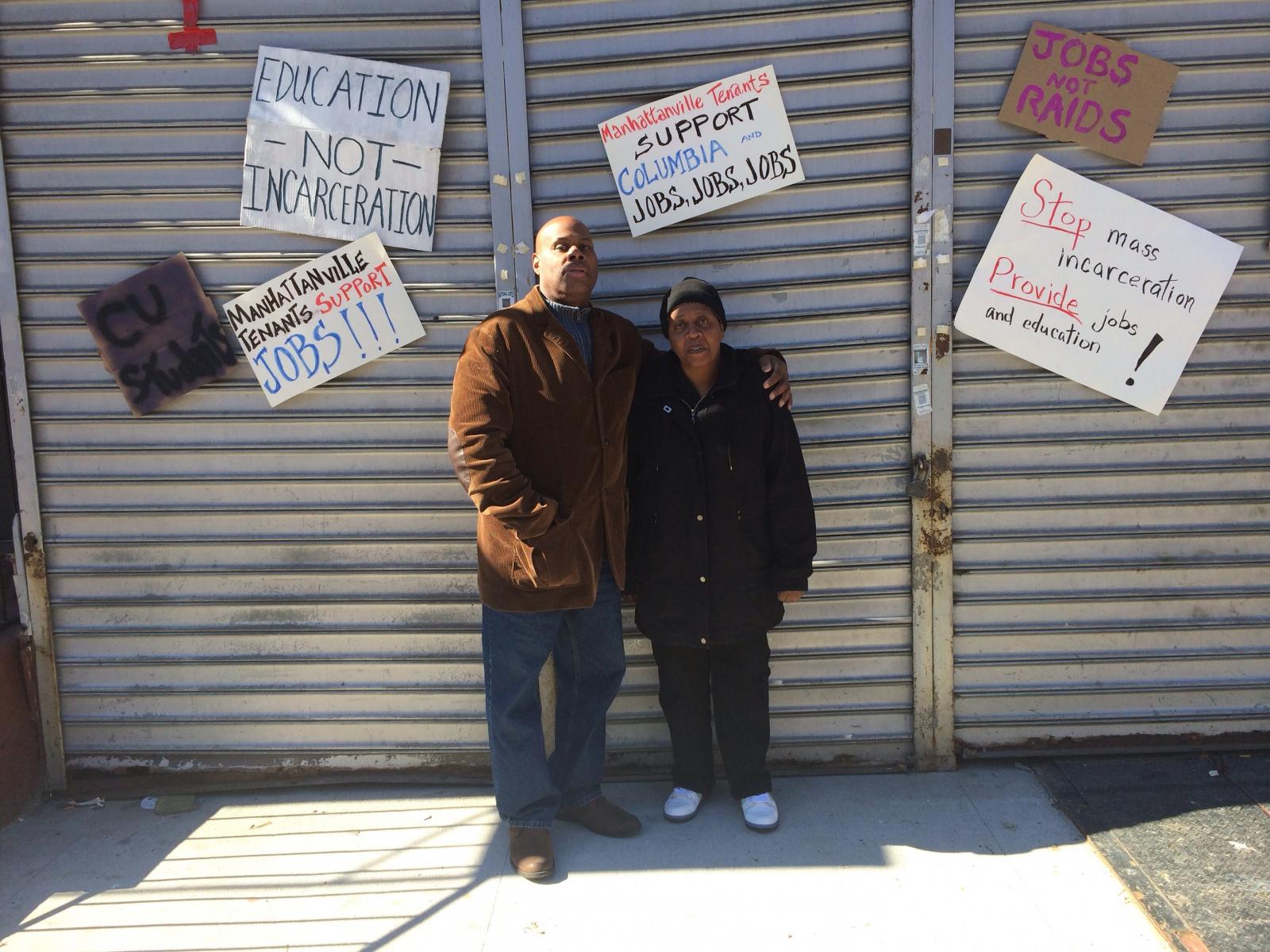 Derrick Haynes and Arnita Brockington have worked to end youth violence at the Grant and Manhattanville Houses. Tayshana Murphy was shot by Brockingtons son in 2011. Haynes and Brockington are pictured in front of the storefront that will house the intervention center, with signs made by Columbia students and neighborhood residents.

Some of the young people arrested in a massive police raid on the Grant and Manhattanville houses in June have begun to come home on bail. And, according to Haynes, a longstanding plan to transform a storefront on Old Broadway into a crisis intervention center is finally coming together.

For the past several years, Haynes and Murphy have been attempting to mitigate violence among young residents of the Grant and Manhattanville houses, which are on either side of the block of Old Broadway.

Violence between young residents has been a problem for decades, but had gradually abated until Murphy's daughter, Tayshana Murphy, was murdered in 2011 at Grant.

Then, in June, the New York Police Department conducted a raid at the houses, arresting more than 40 young men and women after a three-year investigation that included the arrests of over 100 residents.

Now, Haynes and Murphy are moving one step closer to rectifying what they see as the root cause of the tension: a lack of resources for young residents of Manhattanville and Grant.

"A lot of the young men who were in the raid are home," Haynes said. "I've spoken to many of them, and they don't have nothing to do."

Haynes and Murphy have been working with the Department of Housing Preservation and Development to lease a former barber shop on the block that has been vacant for over five years, according to Haynes.

After cleaning up the space, they hope to host after-school programming, crisis intervention services for outbreaks of violence, and a 24-hour crisis hotline.

"If something's going on and you don't want to call the police, you can call the 24-hour hotline and Derrick Haynes or Taylonn Murphy will respond," Haynes said.

Haynes, who grew up at Manhattanville, said that his and Murphy's familiarity with the neighborhood will help them mediate violence.

Still, he said their programs have struggled to obtain funding from the West Harlem Development Corporation, a local grant-giving organization tasked with distributing the funds that Columbia allocated to the West Harlem community at the outset of construction on the Manhattanville expansion.

He was awarded a grant in 2013 for a program called Full Circle Life Enrichment. At the time, the WHDC credited the program on their website with initiating a reconciliation between youth at Grant and Manhattanville.

Marlene Naanes, a spokesperson for the WHDC, said in an email to Spectator that Haynes' experience was not out of line with the WHDC's standard procedures.

"In our first grant cycle in 2013, Mr. Haynes received a $40,000 grant contingent on meeting certain objectives with respect to delivery of services and benefits to residents of CD9/West Harlem," she wrote. "Based on his interim report, he failed to meet the objectives and WHDC decided not to re-grant him for his second installment of $20,000."

While three million dollars of the funds Columbia has promised to the community will go directly to projects at Manhattanville and Grant, Haynes said it has been difficult to persuade the members of the tenant associations that control those funds to direct them to youth programming.

"They're not maliciously trying to keep the fighting going on among the kids," Haynes said of the Grant and Manhattanville tenant associations. "If you've never learned how to run a proper program, then it's difficult to initiate a proper program."

Haynes said they have also reached out to city council member Mark Levine's office for help funding the program. A spokesperson for Levine said on Monday that detailed discussion of the plan has not yet taken place.

Naanes said that the next grant cycle will begin in July 2015 and so far, neither Murphy nor Haynes has submitted a proposal for funding for a crisis intervention center.

Still, while Haynes said he was happy to hear the WHDC's recent announcement that it will focus on funding more local projects going forward, he is reluctant to wait until July before moving forward with the program.

"The way the West Harlem Development does their funding right now, they're not releasing any money for the summer," he said. "In order to have an impact on young kids, … we just thought it would be important and urgent to provide some funding for the summer."

Haynes is hopeful that after finally signing off on the lease this week, he will be one step closer to affecting change from a location that sits at the source of the problems facing Grant and Manhattanville.

"125th is the epicenter because you've got Grant and Manhattanvile and you've got the new campus coming up," he said. "It will make a difference if we can do it."