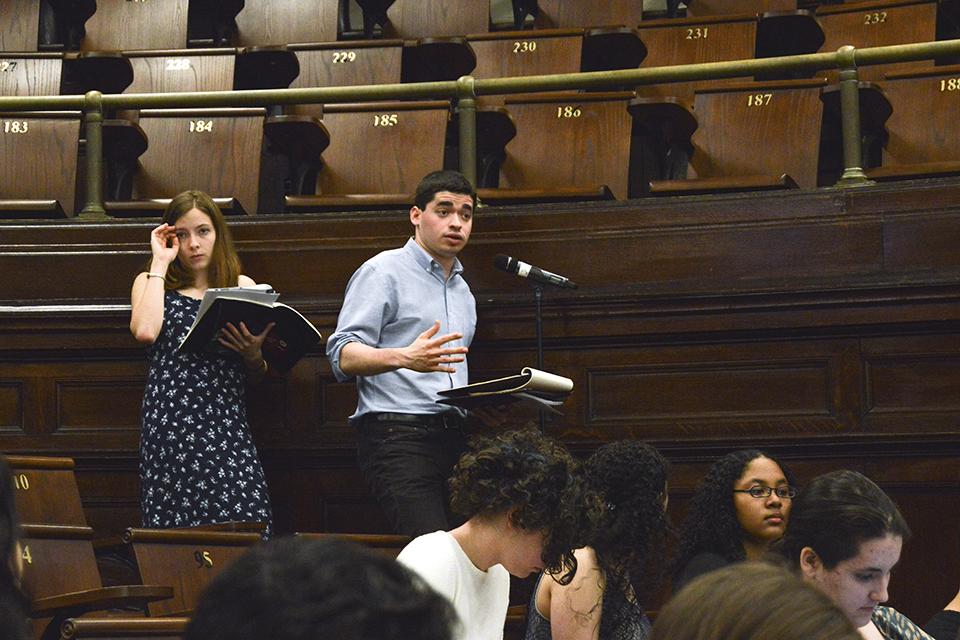 Marc Heinrich, CC 16, pictured at April's town hall on the University Rules of Conduct, said that he hopes to continue discussing media protection next year.

The University Senate approved the proposed revisions to the Rules of University Conduct at Friday's plenary meeting with 63 votes in favor and one abstention.

At the plenary, University President Lee Bollinger asked the rules committee if they had considered including media protection in the new Rules.

In response, Christopher Riano, GS '07 and co-chair of the committee, said that the committee chose not to codify protections for media, arguing that anybody could be considered press.

"Nowadays, we all have iPhones. Really everybody is press, anybody can watch a protest here," Riano said. "Anybody has the opportunity to engage in the photographing or the watching of what we do here at the university."

Since the release of the first draft of the proposed revisions at the April plenary meeting, the University Senate's Student Affairs Committee has urged the rules committee to include protection for members of the press covering protests. The concern for media protection arose after a reporter and photographer from Spectator were sent warnings after covering No Red Tape's protest at a prospective students' information session in February.

But no such media protection was added to the version of the proposed rules passed Friday. The only possible protection the rules may afford journalists is by calling for a delegate appointed by the President or rules administrator to create separate areas for demonstrators believed to be in violation of the rules, and for protest observers such as press. Without a media carve-out, student journalists may be accused of and punished for violating the rules in their attempt to cover protests in designated demonstration areas.

Abby Abrams, BC '15, and the 138th editor-in-chief of Spectator warned at town hall in April of the chilling effect the rules could have on campus journalism in the absence of a media carve-out.

In the event that a delegate creates separate areas for protesters and for observers, "reporters could not be reporting on the protestors who are actually doing the protesting and potentially violating the rule," Abrams said. "So that would mean that if a reporter was in the [protest] area they could be designated as violating a rule."

In an interview with Spectator, Bollinger said he "strongly supports" a media carve-out in the rules.

"I think we really must recognize that just like any community, we are interested in having a press and having a press that covers events, and in order to do that you have to be able to be present at events that are controversial and protests and the like and it's a kind of right of access to information that is broadly supported," Bollinger said.

"This is obviously a priority of the Student Affairs Committee," Heinrich said. "The media carve-out is something I think next year we will examine more closely."

Bollinger also called for minor edits in the new Affirmative Rights Statement in the rules detailing the University's commitment to freedom of expression on campus.

"There are some things in this that I would put at the level of minor editing," Bollinger said. "Certain statements about the freedom of speech I know are not quite right and need to be rephrased."

The new rules must receive final approval by the Board of Trustees before they would go into effect in the fall semester. Bollinger indicated at the end of the plenary that he and the trustees will likely make minor edits to the rules before approving them.