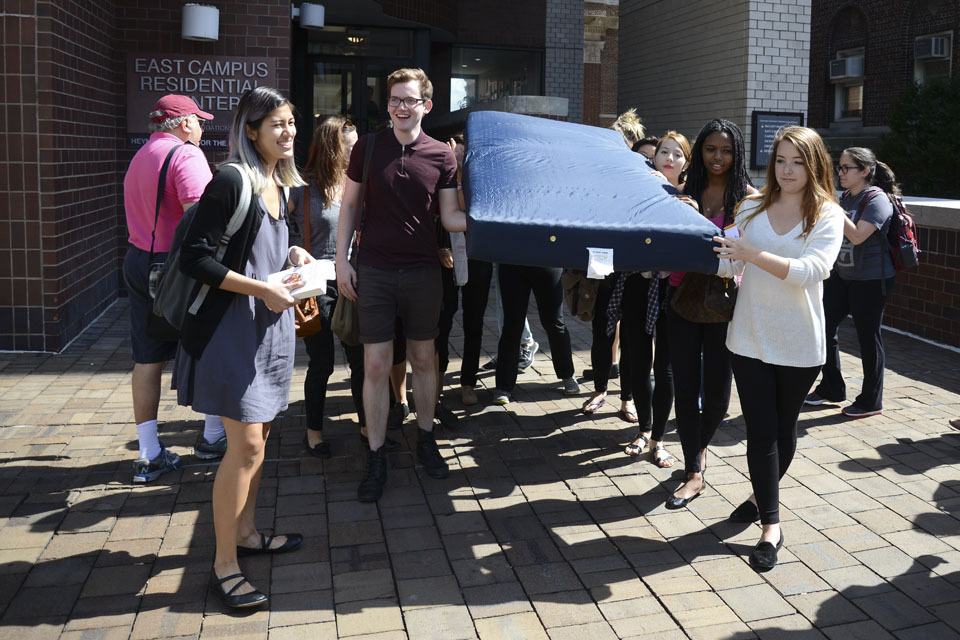 A provision barring large items from Class Day may prevent Emma Sulkowicz, CC '15, from carrying her mattress at the ceremony.

A provision barring large items has been added to administrative guidelines sent to seniors before Columbia College Class Day on Tuesday. This may include the mattress that Emma Sulkowicz, CC '15, plans to bring to the event for her senior visual arts thesis.

"Graduates should not bring into the ceremonial area large objects which could interfere with the proceedings or create discomfort to others in close, crowded spaces shared by thousands of people," an email sent to graduating seniors from GradZone on Monday said.

This excerpt was not included in similar emails from GradZone—Student Affairs' name for communications regarding graduation—in 2014 or 2013.

Sulkowicz did not immediately respond to requests for comment.

A University spokesperson did not immediately respond to requests for comment about whether Sulkowicz would be allowed to bring her mattress into the ceremony and what prompted the policy change.

Since September, Sulkowicz has garnered national attention for senior visual arts thesis, "Carry That Weight," in which she has carried her mattress around campus until her alleged rapist, Paul Nungesser, CC '15, is expelled, graduates or otherwise no longer on campus.

"The piece could potentially take a day, or it could go on until I graduate," Sulkowicz told Spectator in a video interview in September.

Nungesser is suing Columbia, as well as visual arts professor Jon Kessler, who has advised Sulkowicz on her thesis, for violating Title IX in their handling of Sulkowicz's project.

Nungesser's lawsuit—which also mentions University President Lee Bollinger and the board of trustees as defendants—claims that by allowing Sulkowicz to conduct her thesis, the University allowed Sulkowicz to break confidentiality agreements and supported her in performing an act of gender-based harassment against him.

Both this year's email as well as messages sent in past years said that the University "has always sought to balance its overarching commitment to free expression on ideas and public issues with the legitimate interest in ensuring that graduation ceremonies proceed in a way that fulfills their intended purpose, mindful of the security and comfort of all participants."

This year's GradZone email also said that students could leave "large objects" by Lerner Hall or graduation tents immediately before the Class Day ceremony and pick them up afterward.