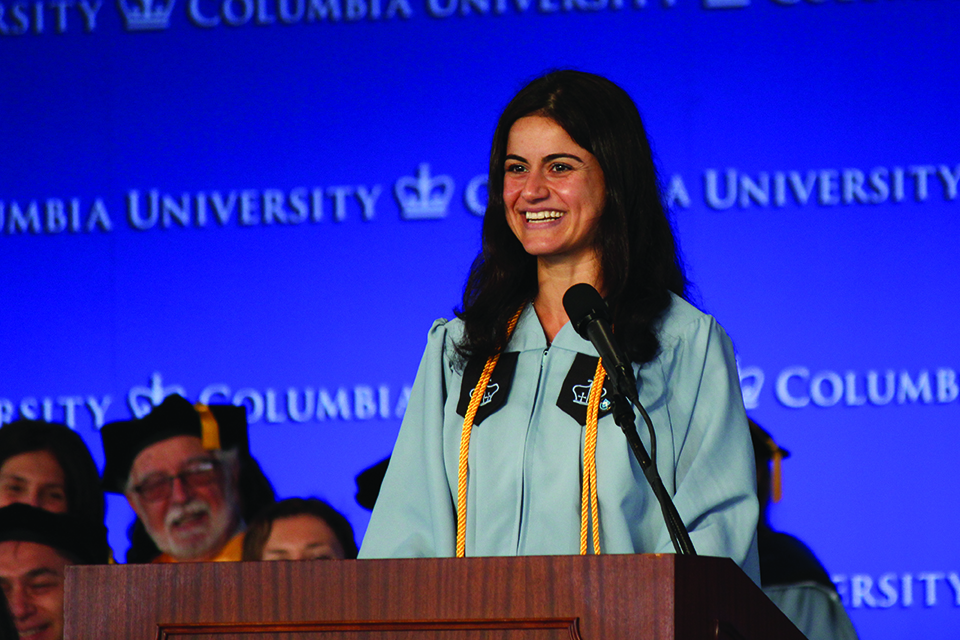 Valedictorian Lindsay Hadad overcame severe depression and an eating disorder before arriving at Columbia, and hopes to help others do the same as a therapist.

Valedictorian Lindsay Hadad, GS '15, is no stranger to academic success.  But when she first found out that she was the 2015 GS valedictorian, Hadad said that she was paralyzed with doubt about her ability to give an adequate speech at the ceremony.

"I felt I did not deserve it," Hadad, who faced early battles with mental illness and self doubt, said in a phone interview Sunday.

Hadad was on the Dean's List every semester at Columbia and the co-recipient of the 2015 Phi Beta Kappa Award, which is given to the GS senior elected to the honor society who best exemplifies "intellectual integrity, tolerance for others' views, and a broad range of academic interests."

A native New Yorker, Hadad was raised by Israeli-American parents and grew up as the middle of three daughters. She enrolled in college right after graduating from Fiorello H. LaGuardia High School in New York, but severe depression and an eating disorder led her to drop out of college early.

"It took years to get back on my feet," Hadad said.

She started working at a high-end antique jewelry store, but she craved a job that would allow her to work more with people, specifically people who suffered from forms of addiction.

"The jewelry store job felt empty," Hadad said. "And my eating disorder was like an addiction, so I can relate to addictions like alcoholism, where you have a twisted mentality and all you care about is your fix."

So Hadad returned to college. She spent a year at the Borough of Manhattan Community College before she matriculated to GS, where she juggled a two-hour commute to school, her job at the jewelry store, and attending classes—all while maintaining a perfect grade point average.

Professors who have taught Hadad praised her academic success and personal strength.

"She was admired by her peers for her willingness to share some of the personal challenges she overcame when they were relevant to what we were studying," Marjorie Silverman, an adjunct psychology professor at Barnard who taught Hadad for a semester, said in an email. "Her careful listening, compassion and mastery of the material will all serve to make her an excellent clinician, one who is able to help people in psychological distress."

Kathryn Chiong, a lecturer in the Department of Art History and Archaeology and Hadad's Art Humanities teacher, was not at all surprised that Hadad earned the valedictorian honors. Chiong said that Hadad impressed her with her deep commitment to her studies and her work ethic.

"What impressed me the most about Lindsay was the fact that she was able to achieve so much, in such a competitive environment, while still remaining such a warm and genuinely thoughtful individual," Chiong wrote in an email Monday.

In addition to her job and full course load, Hadad also spends time working with children, tutoring and mentoring first graders at P.S. 125 on West 123rd Street during her sophomore year.

She also worked in an afterschool program at the Quad Manhattan, a preparatory school in TriBeCa, where she worked with "twice exceptional" kids—students who are unusually talented yet lagging in social skills, often falling somewhere on the autism spectrum.

Hadad was also involved with the New York University Child Study Center as part of a longitudinal study of first generation children from Latino families. As part of the study, she worked as a teacher's aide in first and third grade classrooms in a public elementary school.

QUAD offered Hadad a full time paid position starting after her graduation, but the recently engaged Hadad said that she instead plans to apply to graduate school and focus on her family. Her ultimate goal is to get a Ph.D. in clinical psychology and become a therapist.

In her valedictorian speech at Monday's GS Class Day Ceremony, Hadad said she often felt like a small fish in a big pond at Columbia. But she encouraged other students to not let that feeling bring them down.

"People tend to question themselves and are afraid of things," she said "The take-home [of the speech] is that I really want people to shine, to own their own talents and everything they have worked so hard for."