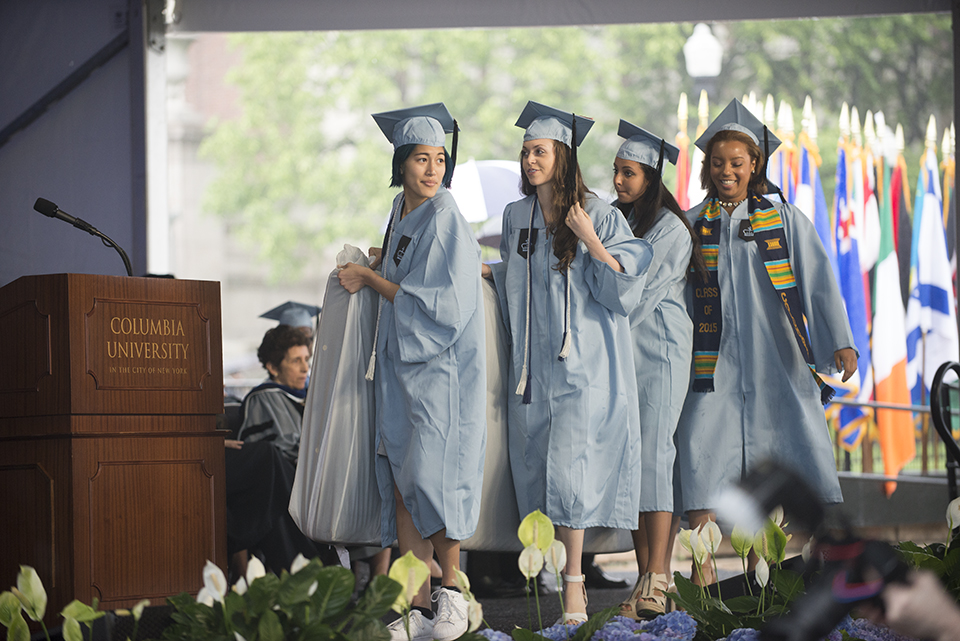 Emma Sulkowicz, CC 15, walked across the stage with her mattress at Columbia College Class Day on Tuesday.

Seniors in Columbia College—including Emma Sulkowicz, CC '15, who walked across the stage with her mattress—were honored at the school's Class Day on Tuesday.

Sulkowicz's walk across the stage came about an hour after Los Angeles Mayor Eric Garcetti, CC '92, SIPA '93, encouraged graduates to continue activism and fight for equality in his keynote speech.

Since September, Sulkowicz has garnered national attention for senior visual arts thesis, "Carry That Weight," in which she has carried her mattress around campus until her alleged rapist, Paul Nungesser, CC '15, is expelled, graduates, or is otherwise no longer on campus.

Despite an email sent to graduating seniors on Monday barring "large objects" at the ceremony, Sulkowicz and four other students were able to carry her mattress onstage. She did not exchange a handshake with either University President Lee Bollinger or Columbia College Dean James Valentini.

Before the event, Sulkowicz told Spectator that she had not received any direct communication from administrators.

In his keynote address, Garcetti brought up Columbia's tradition of activism, mentioning efforts taken by Columbia Prison Divest and Sulkowicz.

"You've held contrary opinions, held die-ins and sit-ins, carried mattresses," he said in his speech. "It is the the responsibility of an active citizen to engage with one another… Never stop being academics, and never stop being activists."

Garcetti's statements about CPD come within a key stage of discussion on divesting from private prisons, as the Board of Trustees will vote on the matter at their next meeting in June.

In his speech, Garcetti cited 15 graduation speech clichés—such as "create art" and "make history"—and then broke down each one with his own advice to the graduates.

"In all likelihood, you probably won't be remembered by history anyway," he said. "So my advice is just complete your ancestry.com profile now while you remember," he said. 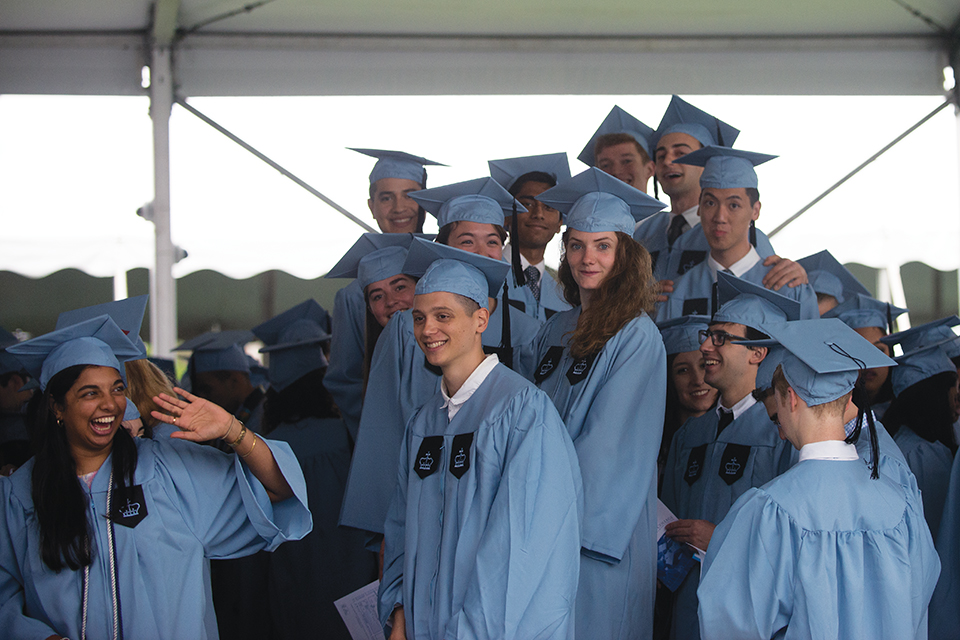 While "fight for equality" was one of the clichés put forth by Garcetti, he broke from his pattern and told the graduates that they should continue to push for progress with regards to exploitation of undocumented immigrants and the "sexual violence epidemic" in the country, among other issues.

"You also want to look back on, 'What did I do with my time on earth? How did I make this a kinder, and a more equal world for everyone?'" he said.

Garcetti added that if he hadn't led efforts to boycott a Morningside Heights grocery store that did not accept cans as an undergraduate, he does not think he would be fighting homelessness in Los Angeles.

Garcetti's speechwriter, Anna Bahr, BC '14, wrote a two-part series for the Blue and White last year detailing the frustrations of several students going through the sexual assault adjudication process, which sparked a wave of campus dialogue on the topic.

Class of 2015 President Kareem Carryl echoed Garcetti's mention of student activism, celebrating his fellow graduates' efforts to change the University during their time on campus.

"For many, Columbia is the activist Ivy, a place where you can come and fight for what you believe in," he said in his speech. "Columbia College and the larger university is a better place because of our presence in it."

Carryl also said that while he remembers feeling unsure about whether he found fit in at Columbia once he was accepted, he ultimately found a home on campus in his four years here. 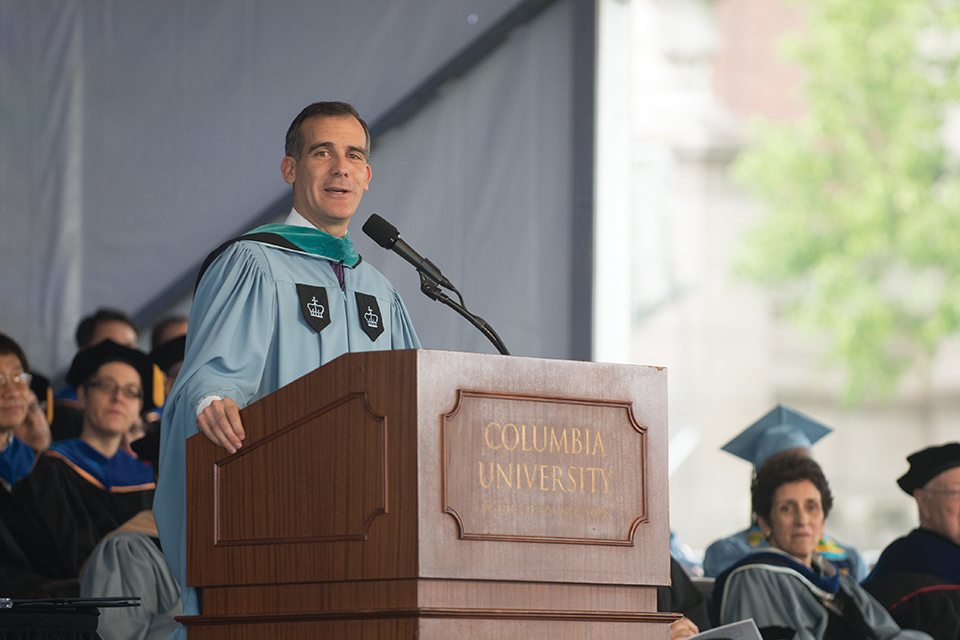 Nungesser, whose name was listed in the program as "Paul Nungußur," was present at the ceremony and walked onstage to shake Bollinger's hand and receive his class pin.

In April, he filed a lawsuit against the University and visual arts professor Jon Kessler, who advised Sulkowicz on her thesis, for violating Title IX in their handling of Sulkowicz's project.

Nungesser's lawsuit—which also mentions University President Lee Bollinger and the board of trustees as defendants—claims that by allowing Sulkowicz to conduct her thesis, the University allowed her to break confidentiality agreements and supported her in performing an act of gender-based harassment against him.

Graduates interviewed after the ceremony said they appreciated Garcetti's speech, calling it both funny and eloquent.

"It seems like he had a very fulfilled Columbia experience, so to hear from somebody who actually has a connection to what the student experience would be today was nice," Jess Anderson, CC '15, said.

Some students, like Garrett Demuth, CC '15, said they were indifferent to Sulkowicz's activism. 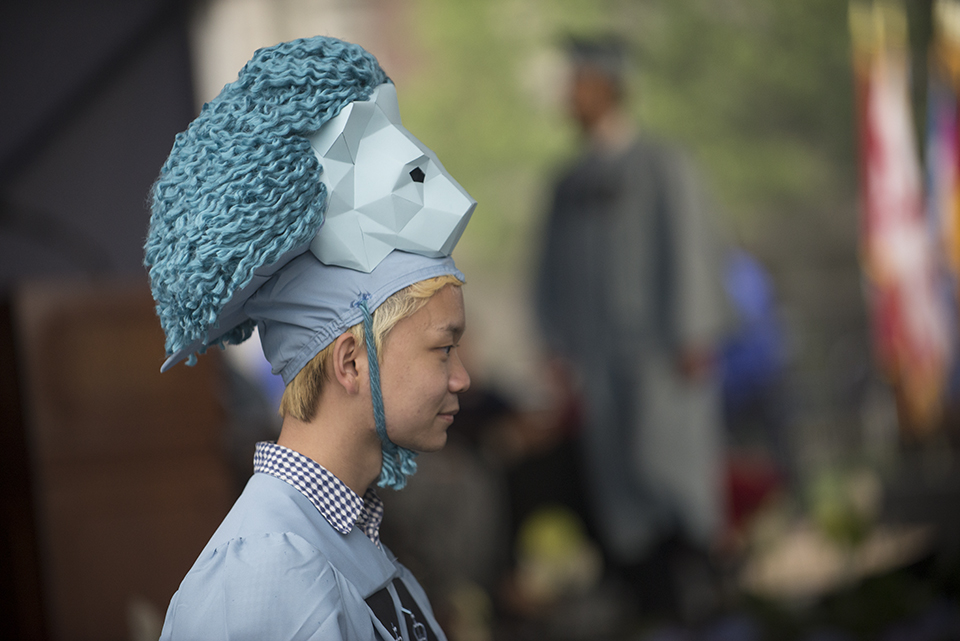 But for others, like Rosalind Bazett Watson, CC '15, seeing the mattress on stage was a powerful sight they said they were glad to see.

"I would have been with her whether or not she was allowed,"Bazett Watson said. "If she took the mattress to that stage and they tried not to let her, I would have stormed there with her."

As other seniors did during earlier ceremonies this week, some students placed strups of red tape on their graduation caps to show solidarity with survivors of sexual assault and protest the Columbia's handling of cases on campus.