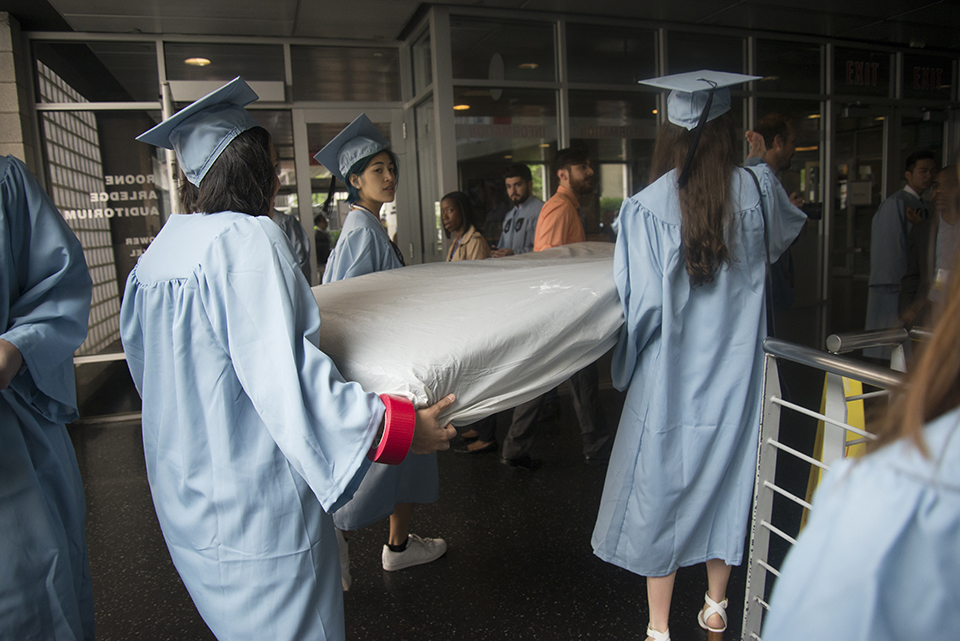 A new art project by Emma Sulkowicz, CC '15, titled "Ceci N'est Pas Un Viol," depicts her having sex with a man on video in an attempt to engage the viewer and their decision to watch it.

"Ceci N'est Pas Un Viol is not about one night in August, 2012," the statement said. "It's about your decisions, starting now. It's only a reenactment if you disregard my words. It's about you, not him." The work's title translates to "this is not a rape," in reference to French painter Réné Magritte.

The eight-minute video for "Ceci N'est Pas Un Viol" depicts Sulkowicz and a man whose face is blurred entering a dorm room as they kiss and undress each other, before engaging in oral and then vaginal sex.

About three minutes into the video, the man hits Sulkowicz, takes his condom off, and then anally penetrates her while she cries out and tells him to stop. As the man gets off the bed, Sulkowicz curls into a corner and lies still before getting up to wrap a towel around herself. For the remainder of the video, she exits the room, makes the bed and then goes to sleep.

"You might be wondering why I've made myself this vulnerable. Look—I want to change the world, and that begins with you, seeing yourself," the statement said.

While the video was down on Friday afternoon because of a cyberattack, Sulkowicz told BuzzFeed reported, it appeared to be working normally again on Monday.

From the first day of classes through graduation, Sulkowicz carried a twin-sized mattress for her senior visual arts thesis until her alleged rapist, Paul Nungesser, CC '15, was expelled, graduated or otherwise left campus. Nungesser is now suing the University for allegedly allowing Sulkowicz to break confidentiality agreements and supporting her in committing an act of gender-based harassment against him through her thesis, "Carry That Weight."

In addition to the artist's statement, the text presented alongside the video includes a series of questions divided into three categories—Searching, Desiring, and Me—such as "Are you searching for proof? Proof of what?" and "What do you want from this experience?"

"If you watch this video without my consent, then I hope you reflect on your reasons for objectifying me and participating in my rape, for, in that case, you were the one who couldn't resist the urge to make Ceci N'est Pas Un Viol about what you wanted to make it about: rape," the statement said.

Sulkowicz declined to comment further and directed Spectator to her artist's statement.

The video was directed by Ted Lawson, a contemporary artist known for a selfie he created out of his own blood, while the actor in the video was found on a fetish website, Lawson said.

"To me, the video is really in three acts," Lawson said in an interview with Spectator.
"There's a consensual part and then there's a beat where it becomes, in my view, a non-consensual act."

Lawson said that both Sulkowicz and the anonymous actor were able to capture this shift well—a change he wanted to focus on in his direction.

"It's hard to wrap your head around how could it be consensual and even be kinky and then become non-consensual," he added. "I think the video expresses the possibility that you don't forfeit that [consensuality] ever."

In the video, the screen is split to depict the act from four different cameras, with each section including the time as it goes from 2:10 to 2:18 a.m.

"In my opinion, it removes the wall between the viewer and the action," he said. "Even though you're watching a performance, there's a feeling of truth. Security camera footage—there's something real about that, and it makes the video that much more shocking and that much more pure."

Although the original version of the video included "08/27/2012"—the date of her alleged assault—alongside the time, the version posted on Monday had this date blurred out instead.

According to Lawson, the video was filmed over winter break in one continuous take, though the final product was the third take overall.

"Emma insisted on it being completely real. Everything had to be actually performed," he said. "That's what makes it a performance art piece. You have to get it in one take and there is no trickery."

While Sulkowicz conceived of the idea and had control over the video's aesthetics and production, Lawson directed the video and advised her on how to find an actor safely, he said.

"I was there to observe and give feedback to the performers between takes that would hopefully help them hit certain beats," he said. "My role is to help Emma think it through, but she really had the feel of it all herself. It's her art piece."

He noted that Sulkowicz chose the lighting and security camera-style footage as well as where the cameras were placed, in addition to writing a script for the video and the artist's statement—which he said emphasizes the viewer and their role in watching the video.

"Art is all about context. Things don't exist in the art world the way they exist in real life all the time, so the way you contextualize the work is what the work becomes about," he said.

"It's saying, 'I'm not that interested in anyone's individual opinions on the Internet anymore. I'm interested in opinions as this kind of medium onto itself, this giant, polluted ocean,'" he said. "That, to me, is interesting. This work and a lot of Emma's work has been exploring that quite a bit."