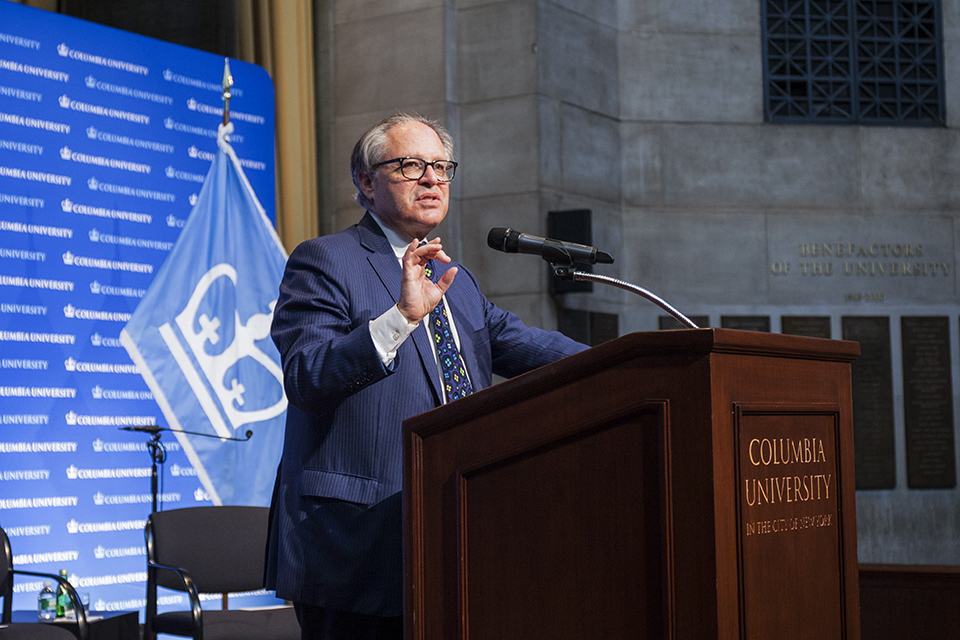 Nicholas Lemann, current faculty member and former dean of the Journalism School, spoke Tuesday night about the first book to be published by Columbia Global Reports, an imprint that commissions journalists for in-depth reporting.

"It starts with the idea that journalism and universities are engaged in very similar enterprises—we are searching for truth and understanding, strong sense of academic freedom, press freedom, freedom of speech and ... speaking truth to power," Bollinger said. "Great universities and great institutions of the press and journalists are engaged in very similar and important activities."

Bollinger noted that the launch of Columbia Global Reports comes at a time at which newsrooms are struggling financially to support in-depth journalism and are subsequently closing their international bureaus.

In an interview before the discussion, Lemann told Spectator that, rather than having journalists approach them, the publishing imprint has been reaching out to journalists whose work they admire.

"What we're trying to do here, there aren't that many people that can do it. My first move in setting up this book was to go to the writer, Bethany McLean, who is one of the best financial journalists," Lemann said. "I think it's a big part of our mandate, to cover the global financial system, so part of it was just talking to her and asking her, 'what's a topic for us that will be fresh in the global financial system?'"

Shaky Ground chronicles Fannie Mae and Freddie Mac years after the crisis, noting the persistence of the effects of the housing crisis on the market today. "It's part of the hidden machinery and people prefer to ignore it before it hits them over the head," McLean said of home-ownership finance.

"I would phrase it as the biggest problem from 2008 that hasn't been fixed yet," Lemann said. "And people need to know because these are very big global entities with global financial impact, impact on millions and millions of americans and impact on the U.S. government."

In the coming months, Columbia Global Reports will publish two more books. The first, Little Rice by Clay Shirky, focuses on China's entrance into the technology sector. The second, The Cosmopolites by Atossa Araxia Abrahamian, chronicles "the buying and selling of citizenship."  In-depth descriptions of both books are available here.

"We're trying to achieve several different types of diversity—one is geographical, and one is topic, and one is author," Lemann said. "Each of the books we're publishing soon is on a different topic set and location. We're always looking for new places, new voices, and new topics."