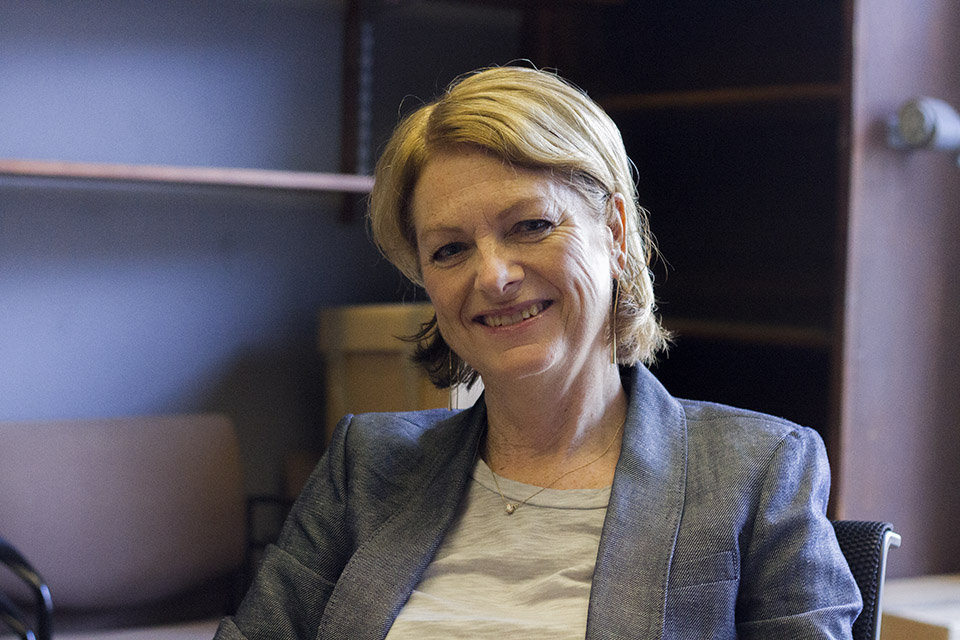 Stephanie McCurry recently arrived from the University of Pennsylvania; at Columbia, she teaches the class "The American Civil War".

Spectator met with these faculty members to learn about what they bring to the history department and why they decided to come to Columbia.

Stephanie McCurry left the University of Pennsylvania after 13 years to replace renowned historian Eric Foner as the department's specialist on the Civil War and Reconstruction, slavery, and 19th-century America. McCurry said that her primary motivation for leaving Penn was an intellectual one.

"It seems to me that if you were offered Eric Foner's job, you just said yes," McCurry said. "I have enormous respect for people in the department. I wanted a new challenge and a new start, and the idea of being able to collaborate with the people here was just so intellectually energizing for me."

Although McCurry's and Foner's research overlap in some ways, McCurry said that Foner's work has broader reach, having researched "pretty much every period of American History from the Revolution to the 20th century," whereas she hones in on the pre-Civil War period and the South, as well as women and gender.

"One of the central and most significant intellectual commitments I have is the idea that women as historical beings are not marginal to the history that got made, but rather they're marginal to the history that we write," McCurry said. "If you think about history as about power, as I do, then it's impossible to deny that the power between men and women is one of the axes upon which the world turns."

McCurry said she is most eager to teach Columbia undergraduates, especially supervising their research.

"I've heard some really great things about Columbia undergraduates," McCurry said. "I'm really excited about being in an environment where, from what I gather, there are a lot of students who are very committed to intellectual life."

Adam Tooze joins Columbia after spending eight years at Yale and 13 years at Cambridge. He specializes in 20th-century and contemporary history, and has published and taught extensively on Germany, World War I, and World War II.

For Tooze, the decision to make the move from New Haven, Connecticut, to Morningside Heights was "really easy."

"The thing that makes it easy is simply the enormous strength of the department here," Tooze said. "It's a phenomenal department, especially for somebody interested in modern Europe and the modern world. To be in a department with, to name three, Matt Connelly, Mark Mazower, Carol Gluck—and those are just three out of the galaxy of people I could collaborate with."

Although Tooze was a targeted hire for German history, he also plans on researching and teaching broader topics in political economy and social theory. This semester, Tooze is teaching Capitalism in Crisis 2007-2015: A Global History of the Great Recession, which will explore the global ripples caused by the 2007 financial crisis—a topic on which he hopes to publish a book in 2018.

Tooze welcomes not just history majors, but also students from other disciplines to take his course.

"It's not going to be a course designed for historians," Tooze said. "The audiences I've taught at Yale have been one-third history, one-third economics, one-third political science and other things. To my mind, the idea is not to advertise history, but to kind of confidently show the way a truly historical approach can speak to very contemporary issues."

Frank Guridy is a visiting associate professor and a transnational historian that researches the Caribbean and its relationship with the Americas. He has researched and published works on Afro-Cubans, African-Americans, and diaspora.

In additional to his work on Caribbean history, Guridy eventually hopes to teach a "sport society in the Americas" course.

"The idea of those courses would be to get students to appreciate the impact of sports—not just for sports fans, literally the impact on the political economy of a city, on racial and gender formation, where people recreate," Guridy said.

Prior to coming to Columbia, Guridy taught at the University of Texas at Austin for 11 years.

"It was a very difficult decision [to leave]," Guridy said. "It's a great department, and I had great colleagues, excellent students. It was one of those things where I sort of saw myself there for the long run, but then life takes you in a different direction you don't expect."

The opportunity to work with a highly respected history department, the chance to be close to family, and the educational opportunities afforded by the city itself all factored into Guridy's decision to come to Columbia.

"I think for me it was the opportunity to come to a department like this, which has been very significant in the field of history, which was too hard to pass up," Guridy said.

"And one of the things I'm really looking forward to is showing students transnational themes right here in the city," Guridy added. "This is probably one of the best places to do it, particularly if you're doing anything with Caribbean-oriented populations, given the diversity of populations here."

Meg Jacobs is a visiting associate professor from Princeton University, where she teaches public policy and history with an emphasis on 20th-century American politics.

Prior to Princeton, Jacobs taught history at the Massachusetts Institute of Technology for 15 years, which Jacobs cites as a formative experience.

"It was exciting to teach engineers because they think of everything as puzzles to be solved, and that's really informed how I teach my classes," Jacobs said.

This semester, Jacobs is teaching U.S. in the Nuclear Age, which discusses the postwar period and aspects that helped lay the foundation for the energy crisis in the 1970s, such as suburbanization or the rise of a new car culture. In the spring, she will offer a class on American consumer culture and a class on the Great Depression and World War II. Since she has been researching the energy crisis for her upcoming book, she expects that the topic will arise no matter what she teaches.

"Columbia has one of the most esteemed history departments, especially for American political history, so that's a great opportunity for me," Jacobs said. "I'm excited to build on that legacy."

Alexandre Roberts is an assistant professor fresh out of the University of California, Berkeley, where he completed his Ph.D. this year. His teaching and research are focused on intellectual history and the history of science and religion in Byzantium and the medieval Middle East.

Byzantinists are something of a rare species within the field of history, which is one of the reasons Roberts chose to come to Columbia.

"I'm in a very small field," Roberts said. "It is very rare for a university to even post a job in Byzantine studies. But also, Columbia has a very special student body and a very special curriculum, so it's a unique kind of experience for both students and teachers."

Roberts came to study Byzantine history through the "kind of roundabout way" of studying physics and Arabic separately.

"The two combined and led me to take a course with a Byzantinist who was actually teaching a course on the reception of classical culture in Byzantium as well as the Islamic Middle Ages," he said.

This fall, Roberts is teaching a seminar called Science and Empire from Baghdad to Byzantium. He will also teach Contemporary Civilization.

"I am very much looking forward to starting this course," Roberts said. "I think it will be a very small group that this attracts, but I'm interested to see who that is."