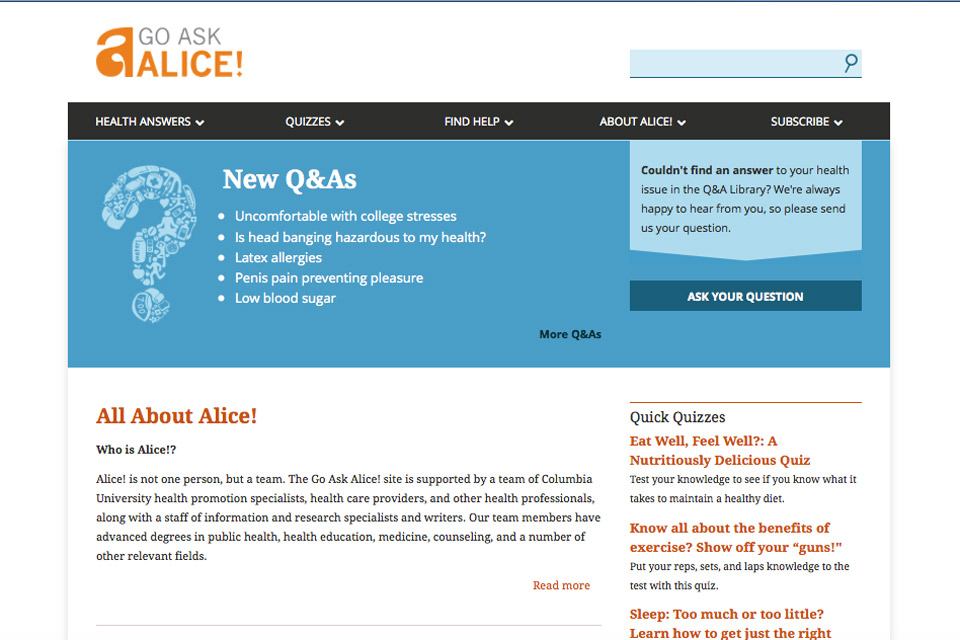 A round of updates made the site accessible to students with vision, hearing, speech, and learning disabilities.The changes were made to comply with the Web Content Accessibility Guidelines 2.0.

According to Michael P. McNeil, executive director of Alice! Health Promotion, the push to meet WCAG 2.0 standards comes from Columbia's commitment to Disability Services. The new site is fully accessible for users who require screen readers or software programs that allow visually impaired users to read a computer screen with a speech synthesizer or braille display.

Some other specific changes that make the site more accessible include a reduction in animated rotations and drop-down menus. Eliminating dynamic animations on devices helps reduce conditions like vertigo.

Previously, according to McNeil, the site only met minimal legal accessibility guidelines as governed by Section 508 of the Reauthorized Rehabilitation Act of 1998, the first accessibility standard for the Internet.

Under this act, all websites are mandated to include text equivalent for non-text items and alternatives for multimedia presentations.

Other recent site changes that were made to follow the WCAG 2.0 include text contrasts to make text easier to read and options for larger print and braille, which requires a screen reader. Content is also presented in a simpler layout, autocorrect is available, and there are alternatives for time-sensitive media.

Over the past year and a half, Columbia Health has worked with the National Federation of the Blind to pursue certification for the new Go Ask Alice! site.

McNeil hopes to get certification by the spring, if not already by late fall, which would make Alice! Columbia's first NFB-certified site.

The updates also made the site fully responsive on mobile. McNeil admitted that the old site was outdated, which limited its flexibility and adaptability.

"We wanted to be able to have a system that was a little more flexible so we could adapt as needs change," McNeil said.

Though the changes could expand the website's potential audience , it will continue to focus on addressing the health concerns of Columbia students.

"Our commitment has always been centered around the needs of Columbia students," McNeil told Spectator. "That's the intended audience. The fact that others use it and find it beneficial and helpful is fantastic, but it has never altered our mission."