Columbia one of only Music Departments lacking proprietary recital space

Columbia one of only Music Departments lacking proprietary recital space 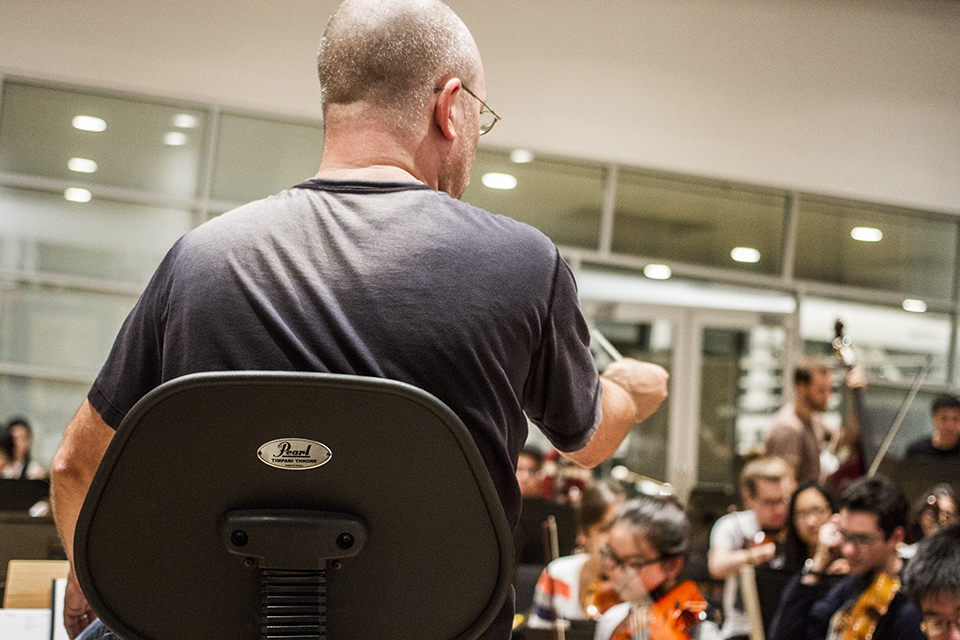 Maestro Jeffrey Milarsky leads the Columbia University Orchestra during one of their weekly rehearsals in Lerner 555.

When Michael Skelly, full-time associate and piano instructor in the Music Department, and a group of his students arrived at Milbank Chapel at Teachers College a few hours before their recital last spring, they found the piano they had reserved locked shut. Because the space is not managed by the Music Department, Skelly was unable to contact someone to unlock the piano, and the group was forced to move its recital to a dining hall only half an hour before showtime.

"I think you would really have difficulty finding any music program of any kind, anywhere, that doesn't have its own recital hall," Boynton said. "We may be the only one in existence."

In order to compensate, the department holds practices and recitals in rented spaces, including the Italian Academy, Milbank Church, and Miller Theater, which are not under the Music Department's control.

This results in numerous pains for the department, such as needing a full-time music department staff member dedicated to coordinating reserved spaces for events, faculty members transporting equipment, and inconsistencies with acoustics across different venues.

"We have to fit everything into the schedule of these various venues, some of which have a very limited availability," Boynton said. "Everything is determined by factors external to what is actually the substance of the program."

Chris Washburne, associate professor of music and founder of the Louis Armstrong Jazz Performance Program, has had to transfer equipment from the Morningside Heights campus to venues throughout the city for the 13 years that the program has been in existence, due to the lack of any permanent storage space.

"When all my energies on a concert date are on actually making sure that our students actually have instruments to play, then I'm unable to focus in on other concerns that are probably more important for the director of the jazz program, and for a tenured faculty member at Columbia University," Washburne said.

Since its conception, the jazz program has grown to include 130 students and 17 ensembles.

"We are now the largest and arguably most competitive jazz program of all of our peer institutions," Washburne said. "Having the highest numbers of students participating, having the most talented come from the pool that is incoming to the Ivy League, and having them arrive and having no concert space, is an extremely absurd situation and frankly downright embarrassing."

Because the program is "nomadic," according to Boynton, problems—such as poor acoustics and having to frequently tune several pianos, which themselves vary in quality—greatly affect the ability of students to perform effectively.

There are spaces on both the Morningside Heights and new Manhanttanville campuses that would potentially serve as appropriate places for a concert hall. However, none of these spaces have been designated for Music department use.

One new space that could have been used, the Lenfest Center for the Arts, which is currently under construction at the Manhattanville campus, will be primarily used by the Theater Department, according to Theater Department Chair Christian Parker.

"We have completely no claim on even an inch of the entire new Manhattanville campus, which is frustrating because there are large projects going on there, which would have been a great opportunity for us to have a recital hall," Boynton said.

According to Boynton, the administration has been unreceptive to requests for a proprietary space at Manhattanville or on the Morningside Heights campus.

While 555 Lerner Hall is an ideal performance space because it is soundproofed and an appropriate size, Lerner Hall was originally intended to be a shared student center, and the Music Department is not allowed to have sole control of the room, according to Boynton.

"It's really been very sad and kind of frustrating to see how this space gets rented out to complete outside organizations," Magdalena Stern-Baczewaska, lecturer in music and the new director of the Columba Music Performance Program, said. "Sometimes you pass by and you see 10 people in a meeting in this great space, which is soundproofed and which does have a beautiful instrument, and our students are hungry for that, and they deserve to have it."

"It seems like a big hole in our Columbia ecosystem that we don't have our own concert hall," Joseph Morag, CC '18 and the concertmaster of the Columbia University Orchestra, said. "I understand there's not exactly infinite space on campus in New York, and that real estate's really hard to come by, but if anyone can do it, we can."

As the Music Department continues to push for its own recital hall, they will begin using Symphony Space, which is at 95th street and Broadway, for recitals this fall.

"It's a solution that we've reached in a way, partly out of desperation, because it's like a Rubik's cube to figure out how to get everybody's recitals and everything scheduled when you don't have your own proprietary space," Boynton said.

However, this is only a temporary solution, and Boynton still hopes to have a dedicated space on campus.

"The impact on morale is also important because it confers less of a sense of importance on this program, which is, for many students, the thing that matters the most to them," she said.

Dean of Humanities Sharon Marcus, who oversees the Music Department, among others, noted that space problems are not unique to the Music Department. "Space is a crisis across the board, including for the humanities," she said. "We offer a lot of small classes, and it can be difficult to find spaces for them a lot of students come here because they have an interest in music and want to take advantage of that, and I hope that we can find a solution to the Music Department's space crisis."