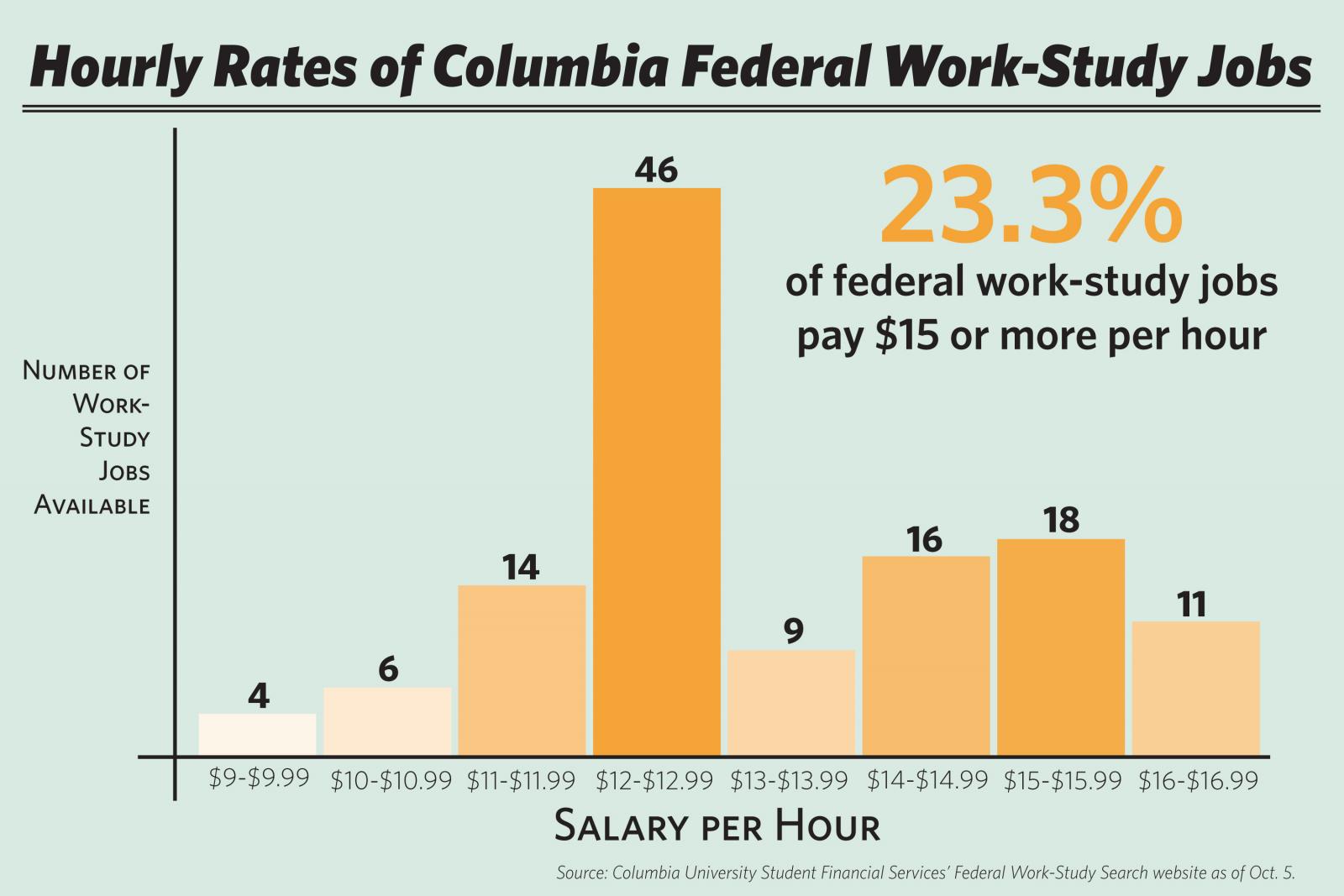 As activists across the country campaign to raise the minimum wage to $15 an hour, Student-Worker Solidarity is pushing to achieve the same pay increase for work-study students on campus.

Students participating in Columbia's federal work-study program as part of their financial aid packages are meant to use their work-study salary to fund "non-billed educational expenses such as books, toiletries, and other personal supplies." These students also often have a semesterly work expectation that can be fulfilled through an additional off-campus job or a non-work-study job on campus.

"There's a ton of people on campus who work for Columbia and Barnard and aren't making a living wage," SWS member Alex Hastings, BC '16, said.

Federal work-study wages are heavily subsidized by the government, with 60 percent coming from the Department of Education and the remaining 40 percent contributed by Columbia.

If the group's campaign were to be successful, the lower limit of work-study pay—currently $9 an hour—would be raised to $15, thereby allowing students to work fewer hours to fulfill their work-study requirement.

"There's so many advantages to not having to work or not having to work for more hours," Hill said. "You can study more, you can relax, you can take a load off for your mental health. You can do volunteer positions that help you figure out what you want to do later, maybe help you get there."

As an additional goal for the semester, SWS members are also looking to expand professional and career opportunities for students in the work-study program.

"Some FWS [federal work-study] jobs are menial tasks and just going through papers and photocopying things," Hastings said. "It shouldn't just be a privilege for some people on this campus to do jobs to put on their résumé that they are interested in and want to do for a career."

Rather than continuing to place students in what she calls "filler jobs," Hastings said that Columbia should improve its Work Exemption Program, which allows work-study students to receive a grant for an unpaid off-campus internship in place of their work expectation and/or what they would have received had they worked a work-study job.

Hastings added that these "filler jobs" often make work-study students feel like they are not doing anything useful.

"From talking to people and even overhearing professors, I think a lot of people feel like they aren't needed," Hastings said.

SWS is currently looking to build support around campus, hosting informational meetings and distributing a survey to gauge student experiences in the work-study program.

As part of its campaign, the group is collaborating with organizers for Columbia's branch of Fight for $15, a national effort to raise the minimum wage that took a foothold on campus in the spring.

"Students especially, many of them who have to pay for school, definitely deserve to be paid enough that they can get around the city," Columbia Fight for $15 organizer Caleb Halvorson-Fried, CC '18, said. "We will not stop fighting until everyone in the state, including students, have this wage increase as well."

In September, New York State Governor Andrew Cuomo approved a wage raise for fast-food workers to $15 an hour, also pledging his support to extend this wage to all workers across the state.

Hastings said that the group hopes to collaborate with other labor organizers, including the new contingent faculty union at Barnard and a student debt campaign at New York University.

Last week, the University of Washington announced that it would be raising pay for all workers, including students, to $15 an hour.

"If a public school is able to raise the wage to that, then there's no excuse for Columbia," Halvorson-Fried said.

In the past, SWS has protested labor conditions at John Jay Dining Hall, Faculty House, local restaurants and, most recently, Blue Java Coffee Bar, where the group alleged that workers were prevented from speaking in Spanish to students.

"I deserve $15 an hour and the people I work with deserve $15 an hour," she said. "It's important when you have administrators having [salaries that total] exorbitant amounts of money but then people working on this campus are barely able to scrape by."