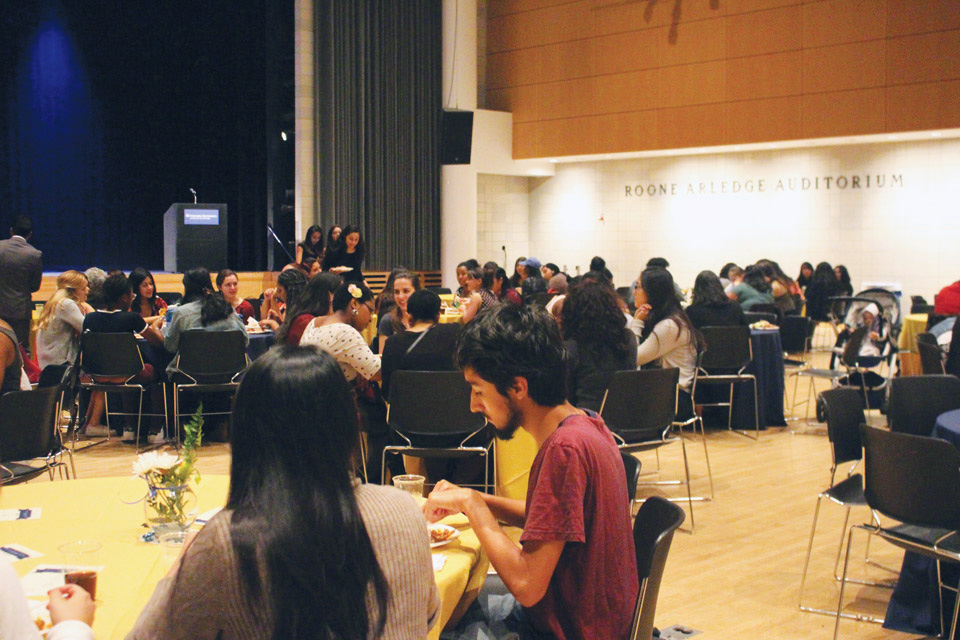 Members of the Latinx community gathered for the Latinx Heritage Month Opening Ceremony.

Latinx is the new Latino.

As nonbinary genders gain visibility and students embrace the idea of intersectionality, many campus groups that once identified themselves as "Latino" are now adopting a genderless variant, "Latinx," in an effort to be more inclusive of all gender identities.

Chicanx Caucus—an affinity group for Mexican and Mexican-American students—was the first group to make this shift, changing its name from Chicano Caucus in December 2014 as part of a constitutional review.

"This 'x' wasn't just the culmination of the change in language," Caucus co-chair Martin Perez, SEAS '17, said. "It's also just changing the very nature of the organization so that it can be gender-neutral, it can be more inclusive."

"By changing our name, that's our way of giving each other a helping hand," she said. "One of the things Latinx Heritage Month is about is exploring the Latinx identity, and a part of that identity is gender neutrality."

English and comparative literature professor Frances Negrón-Muntaner, who teaches Introduction to Latino Studies, said that the decision to adopt "Latinx" instead of "Latin"—a gender neutral term that already exists—draws more attention to the issue of intersectionality.

"While the word Latin simply eliminates the question of gender particularity, Latinx is calling attention to issues of gender and LGBT exclusion and marginalization in a broad way," Negrón-Muntaner said. "It seems that the 'x' is also standing in for a critique to larger structures of power."

Negrón-Muntaner added that the shift from "Latino" towards "Latinx" can also be interpreted as a pushback against the attitudes of older members of the community.

"The terminology [for] the concepts they are inheriting might not embody their perspectives on their experience and their aspirations," she said. "There is an inherent critique in the proposing of a new term to prior generations."

While some other communities use terms such as "Latin@" or "Latina/o," LHM publicity chair Elodia Caballero, CC '17, said that the "x" allows individuals to define gender however they want to.

"With the @ sign you create this binary situation: You have man or female, but what about the people who don't identify with either?" she said. "That's the purpose of the 'x'—so it doesn't matter which gender you identify with."

LHM events chair Elvis Diaz, GS '16, said that because many students identify themselves by their national origin rather than by their "Latinidad," it is especially important to use a term that emphasizes solidarity and inclusivity.

"It's just really [addressing] that identity and that struggle—that as Latinxs, we are trying to identify ourselves too," he said. "Even trying to find out that Latino or Latinx identity, it's just so hard to define."

Chicanx Caucus looks to treat members' pronouns with sensitivity and hosts smaller discussions focused on issues of gender and sexuality led by a chair, Lorenzo Orozco, CC '18, who is tasked with dealing with these topics.

Still, not everyone feels that "Latinx" is the best option. Chris Woods, assistant director of multicultural affairs and LGBTQ outreach, said that he prefers the use of the term Latina/o—in which the last vowel is pronounced as one diphthong—because it ties more easily into the Spanish language.

"Latinx doesn't roll off the tongue when you're speaking Spanish, so that's a little hard," Woods said. "With Latinx what you're doing there is a lot more, I think, radical, in that you're changing language completely."

Though Chicanx Caucus and LHM are the only two student groups that have formally changed their names, LHM co-chair Alejandra Figueroa, BC '16, said that other organizations have also contributed to this dialogue, participating in their own discussions around terminology and using "Latinx" in written communication.

Diaz, a member of Sigma Lambda Beta, which describes itself as a "Latino-based fraternity", said that its members quickly accepted the term "Latinx" and began promoting its usage.

While adopting this shift has been more challenging in a student organization that is inherently gendered, Diaz said that he has been in touch with the national leadership of the fraternity to begin using "Latinx" in discussions from across college campuses.

Feliciano, who is also a co-chair of the Student Organization of Latinos, said that SOL is likewise considering how it might change its name to reflect a more gender-inclusive reality.

Ultimately, Figueroa said that these name changes are an attempt to preserve the legacies of leaders within the community who advocated for more gender inclusivity.

"Now we're pushing those boundaries and letting go of those opinions that are deeply entrenched in our traditions," she said. "We can create a network for each other, and 'Latinx' itself ties into the fact that we are looking into the future and now leaving that legacy behind for future generations as well."

"We're realizing that not all of our voices are being heard yet, so it's trying to make sure everyone has a say at the table and everyone is included," Chicanx Caucus secretary Maria Fernanda Martinez, CC '18, said. "It's ultimately a safer space than it used to be."