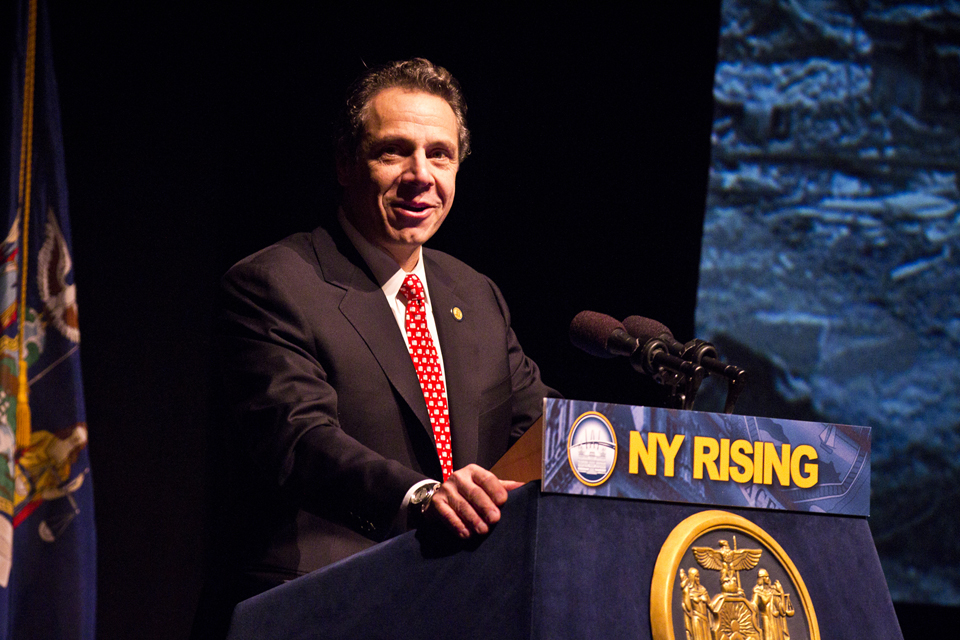 After delivering a brief speech at Roone Arledge Auditorium, Cuomo signed the Subnational Global Climate Leadership Memorandum of Understanding, an agreement between states, provinces, and cities across the world to work to prevent the Earth's average temperature from rising 3.6 degrees Fahrenheit by the year 2100.

"To deny climate change is to deny reason," Cuomo said.

The remarks given by Cuomo and former Vice President Gore—who won an Oscar for his film on climate change, "An Inconvenient Truth"—followed the state's recent rollout of Reforming the Energy Vision, an initiative to foster the creation of clean energy innovations.

Cuomo's remarks centered on pioneering actions that the state is taking to combat climate change and reduce greenhouse gas emissions. These actions include exploring the possibility of linking North American carbon markets, dedicating $1 billion to the New York solar industry through the NY-Sun initiative, and installing renewable energy on 64 public university campuses in New York by 2020.

Gore said that as Cuomo's friend and former colleague, he was "thrilled" with the steps the governor and New York legislature at large have taken. He noted that Cuomo's leadership on the state level is crucial in proving that emissions levels can be reduced, as world leaders gather for the U.N. November climate negotiations in Paris.

He also referred to New York as a giant of environmental sustainability and as a model for other states.

"New York is walking a high wire, and everyone is watching," Gore said.

In a nod to their hosts, both Cuomo and Gore lauded Columbia's steps toward addressing climate change, referencing the University's commitment to installing a 15-megawatt combined heat and power facility, which will both reduce energy costs and improve efficiency.

Their remarks come two days after student activist group Columbia Divest for Climate Justice presented a new fossil fuel divestment proposal to the University's Advisory Committee for Socially Responsible Investing. CDCJ has called on the University to divest from the fossil fuel industry since its inception in 2012.

"We all owe them a debt of gratitude," Cuomo said of the researchers, staff, and students at the Earth Institute.

The Institute is in the process of looking for new leadership—Spectator reported Wednesday that its current director, Jeffrey Sachs, will step down from the position in June 2016. Sachs, the special adviser to U.N. Secretary-General Ban Ki-moon on the Millennium Development Goals, is widely considered to be one of the world's leading experts on economic development and poverty.

In his opening remarks, University President Lee Bollinger touted Columbia's many faculty members working across disciplines to find practical solutions for a more sustainable planet, describing them as "pioneers."

Bollinger noted that the University has long been committed to reducing its carbon footprint and that the Manhattanville campus is the first LEED Platinum campus design in the United States, a U.S. Green Building Council certification awarded to the foremost buildings designed for optimal environmental and human health performance.

"We stand ready to help the state in any way we can," Bollinger said. "As New Yorkers and citizens of the world."