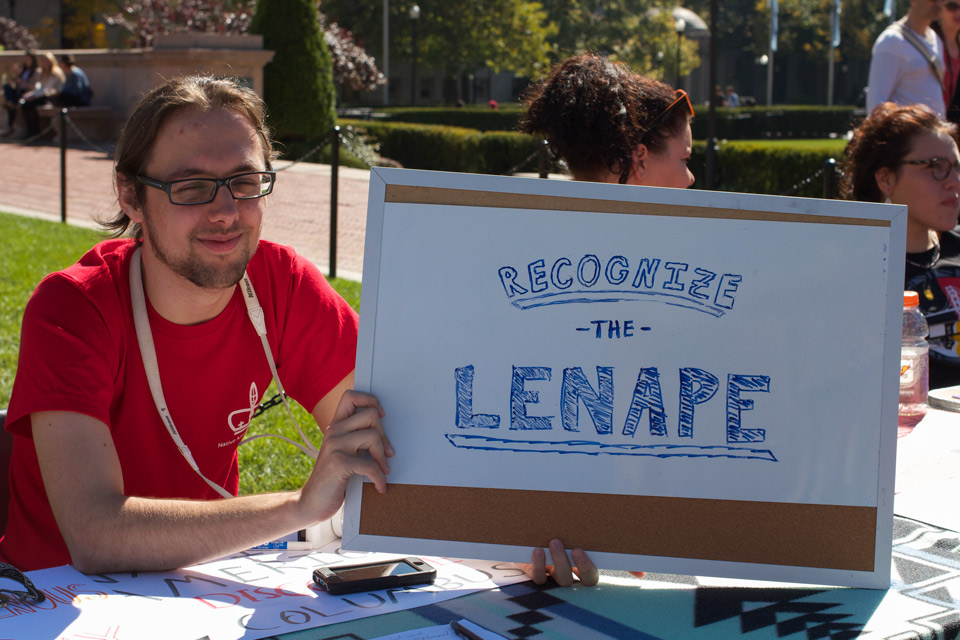 As part of its celebration of Indigenous People's Day, the Native American Council is calling on Columbia to officially recognize the holiday and install a plaque on campus commemorating the Lenni Lenape, who originally inhabited the land on which the Morningside Heights campus is built.

"[We want] acknowledgement of the history of the land and the people who were once here and continue to be here," NAC Co-President and Spectator editorial board member Elan Pochedley, CC '16, said.

Indigenous People's Day—which serves as a counter-celebration to Columbus Day in order to celebrate Native American culture and history—has steadily increased in popularity since its founding in the 1990s, with major cities, such as Portland, Oregon, and Minneapolis, and the state of Alaska officially observing the holiday.

"It would be wonderful to have recognition from Columbia that we are here and this is our holiday, whether or not classes are taken off that day to recognize part of the student body," NAC Publicity Chair Elsa Hoover, CC '17, said. "It would be a welcome gesture of support for a small but thriving community at Columbia." 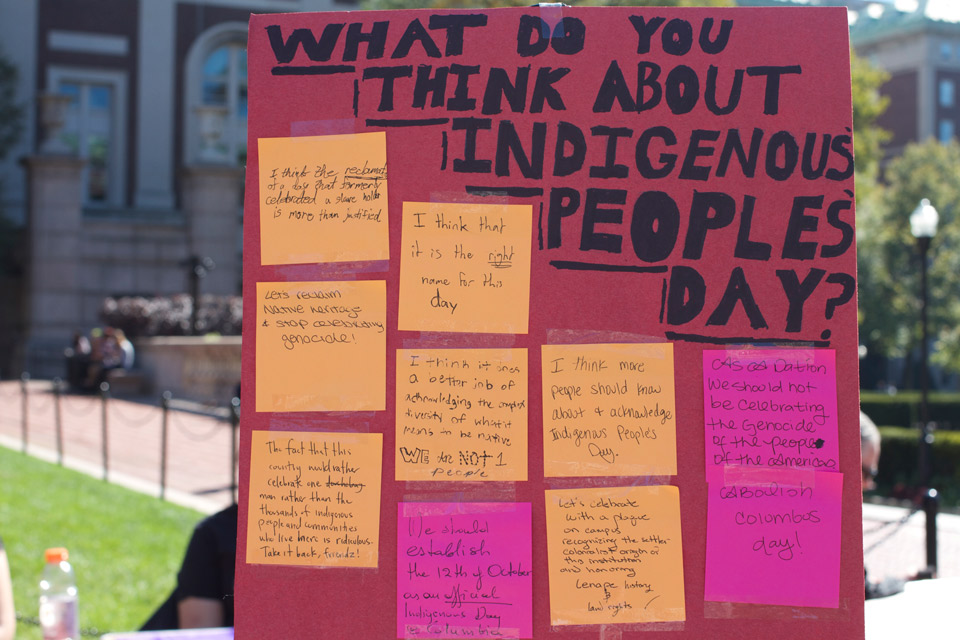 Oklahoma University and the University of Alaska Southeast have both officially recognized the day, but no Ivy League school has done so.

The recent publication of an column in support of Columbus Day in the Brown Daily Herald sparked controversy surrounding what Brown calls "Fall Weekend," drawing further attention on the push toward celebrating Indigenous People's Day on college campuses.

Only Harvard officially recognizes Columbus Day, though Brown and Cornell hold fall break during the same weekend. The remaining five Ivies—including Columbia—have class on the second Monday in October, when the day is traditionally recognized.

"The stance that the University has taken has been one of not taking a stance," Pochedley said. "We don't celebrate Columbus Day, obviously, [which] you can see from students at class, but at the same time, that silence is not enough when we should be celebrating this holiday [Indigenous People's Day]."

Since spring of 2013, NAC has been calling on Columbia to install a plaque commemorating the Lenni Lenape, who originally inhabited the island of Manhattan, though the organization has faced difficulties in terms of raising money to fund the plaque and navigating the proposal process.

"[We] needed to find some way to fund the plaque in perpetuity, and students needed to come up with the entire proposal," former NAC President Julian NoiseCat, CC '15, who first spearheaded the campaign to establish the plaque, said. "The system is primarily set up for donors. It is not easily accessed by students who were looking to do something that we were trying to do."

The group's efforts to install the plaque have also drawn support from other organizations on campus, including Chicanx Caucus, Grupo Quisqueyano, LUCHA, and, notably, the Columbia University College Republicans.

"Our campus has yet to have a single plaque acknowledging the original inhabitants of the land on which our university has been built. This is needs to change," LUCHA said in a statement posted on its Facebook page. "A plaque won't right violences, but it is an important step in acknowledging them."

Last fall, Jamie Boothe, CC '15, came under fire when he wrote an op-ed in Spectator on behalf of the Columbia University College Republicans, saying that students should "consider the positive effects of European explorers."

CUCR President Andy Truelove, CC '17, said that while the organization—which has held an annual barbecue to celebrate Columbus Day—has not reached a consensus in regards to Indigenous People's Day, the organization is in support of NAC's campaign to install a plaque.

"It [this decision] shows how a leader within a particular ideological community can work towards positive change in a direction that they believe will do the campus good," he said. "It's really good for the campus dialogue to come out in support of something that traditionally is not the case."

For Pochedley, the recognition of indigenous history is needed for complete understanding of the country's and the University's history.

"The fact that this campus has so many effigies dedicated to colonial figures and early United States figures, it's really demeaning," Pochedley said. "What it boils down to is the fact that this is operating as a form of historical erasure, the fact that there's not a plaque already recognizing this as Lenni Lenape territory."