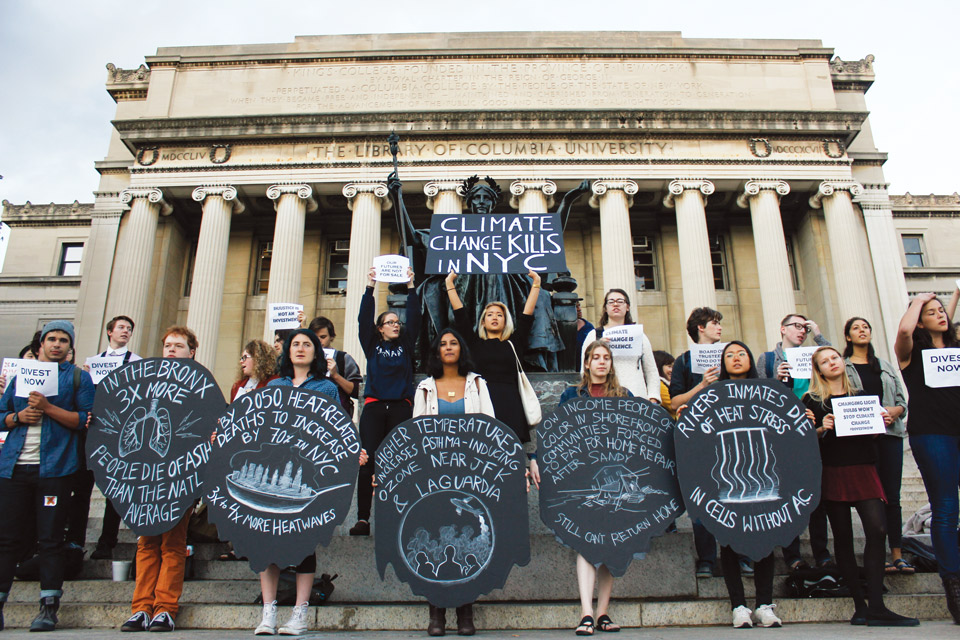 With a heavy police presence near campus, about 50 members of Columbia Divest for Climate Justice chanted phrases like "Profiting from climate change is immoral," at a protest on Wednesday intended to pressure Columbia to divest from the fossil fuel industry.

This event—part of a national climate change day of action—came an hour before group members presented a proposal on fossil fuel divestment to the Advisory Committee on Socially Responsible Investing, asking University to divest its direct and indirect holdings from the top 200 oil, coal, and natural gas companies.

As CDCJ escalates its tactics to pressure Columbia to make a decision, the group has also collected 170 student pledges to engage in nonviolent civil disobedience—including possible arrest and expulsion—if the University does not divest from fossil fuels.

Notably, CDCJ's protest was marked by the presence of approximately 40 police officers along Broadway, from 114th to 116th streets.

At the protest, group members filed onto Low Steps, raising signs that featured slogans such as "Climate change kills New York City" and demonstrating examples of the effect of climate change on city infrastructure and communities. As students passed by Low Steps, protesters called for Columbia to "be a leader" and "stand up for people and the planet."

"We'd like to place pressure on the administration before our members' presentation of our proposal before ACSRI, and we'd also like to mobilize the student body to show ACSRI we have broad-based student support," CDCJ member Nikita Perumal, GS '16, said.

Two police officers present at the scene, both of whom asked to remain anonymous out of concerns for job security, confirmed that police were present because of the CDCJ protest on Low Steps, but declined to comment further.

A spokesperson for the New York Police Department said that they had no information on the police presence around campus.

CDCJ organizer Rachel Fifi-Culp, CC '17, said she was surprised to see police members following the group's protest, noting that their presence could have made students of color especially uncomfortable.

"It speaks to a trend of over-militarization of our campus against students," she said. "The fact that they [Public Safety and the NYPD] are mobilizing against students so frequently is scary." 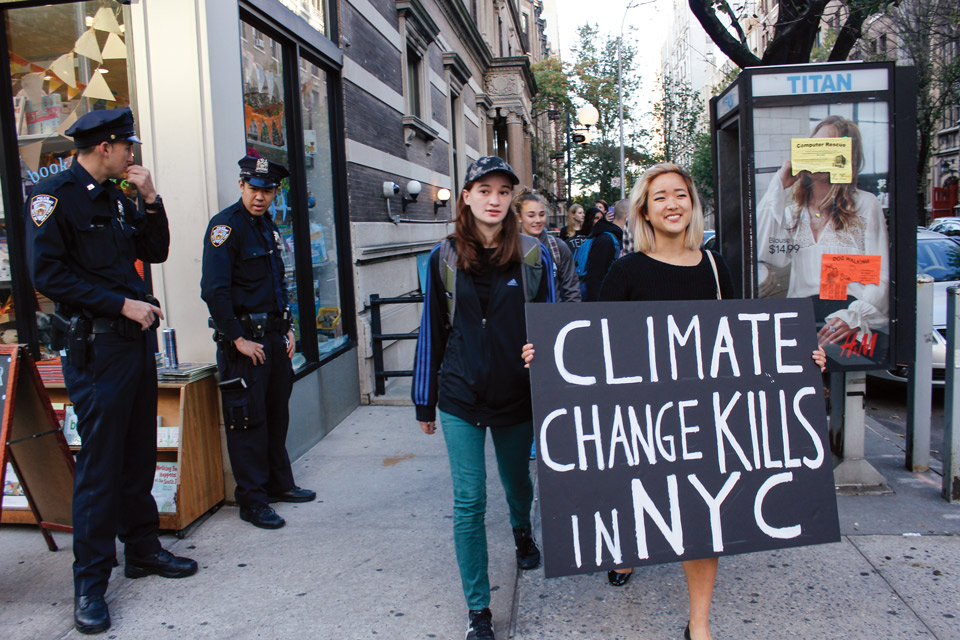 Members of Divest Barnard were also present, urging both Barnard and Columbia to divest because "climate change disproportionately hurts women."

"Around the world, climate change will affect the people who are already the most vulnerable," the protesters chanted. "Women, children, people of color, low-income communities. And Columbia supports that for profit. It's not about trees, it's about people. Climate change is about climate justice."

Earlier in the afternoon, Divest Barnard staged a speak-out outside of Barnard Hall to coincide with both the People's Climate Movement National Day of Action and the beginning of committee meetings for the Barnard board of trustees. Barnard President Debora Spar and the trustees' Committee on Investments was slated to begin discussion on fossil fuel divestment.

"Unless Columbia University commits to divesting from the top 200 coal, oil, and gas companies, I will participate in nonviolent civil disobedience to protest Columbia University profiting off of, and therefore condoning, a business model that endangers public health, exacerbates climatic and political instability, and disproportionately harms people of color and low-income communities around the world," the pledge says. 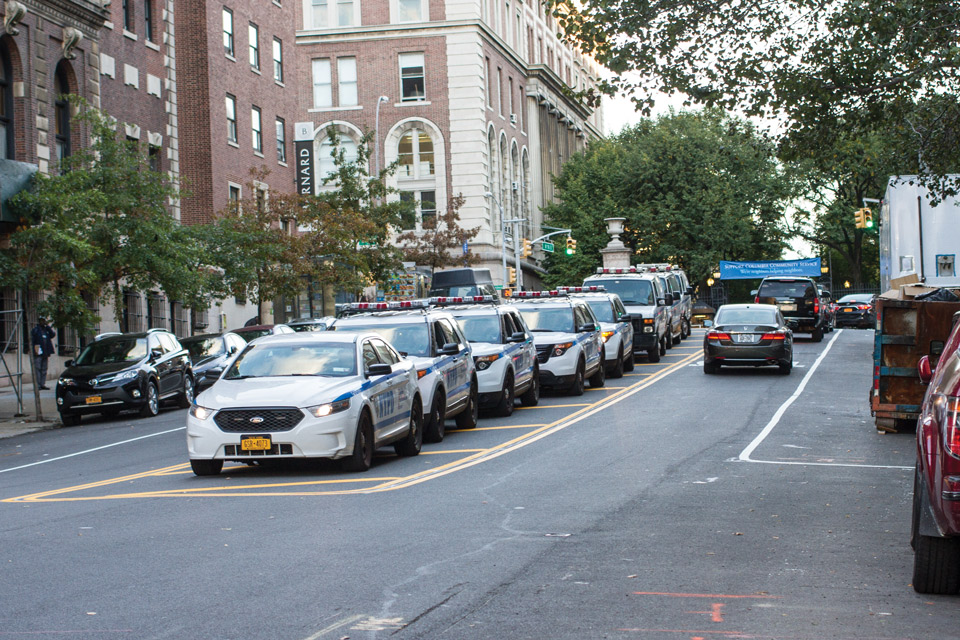 Cops surrounded campus during the protest.

CDCJ organizer Iliana Salazar-Dodge, CC '16, said that the pledge intentionally lacks specifics regarding the type of action and timeline, because these factors will depend on ACSRI's response.

"It seems like we're going to escalate no matter what," Salazar-Dodge said. "If they [ACSRI] do endorse [the proposal], our target will be the board. But if they don't, they would also be targeted."

Inspired by a similar effort from the fossil fuel divestment campaign at Stanford University, CDCJ's pledge, which was launched two days ago, includes an extended sit-in over several days, a "sleep-in," and a hunger strike among listed possible forms of protest.

"It's pretty vague what we want to do, but it could involve anything from students occupying an entire building or an office," Salazar-Dodge said. "We don't have a concrete plan."

Salazar-Dodge added that she anticipates the group will be carrying out civil disobedience before COP21, an international conference slated to be held in December that seeks to achieve a binding global agreement on stabilizing climate change.

ACSRI's only scheduled meeting between now and the conference will be on Nov. 11.

"Columbia is at a point where it can lead and create a global impact, since it [COP21] will be a global stage," Salazar-Dodge said. "So we will escalate before then."