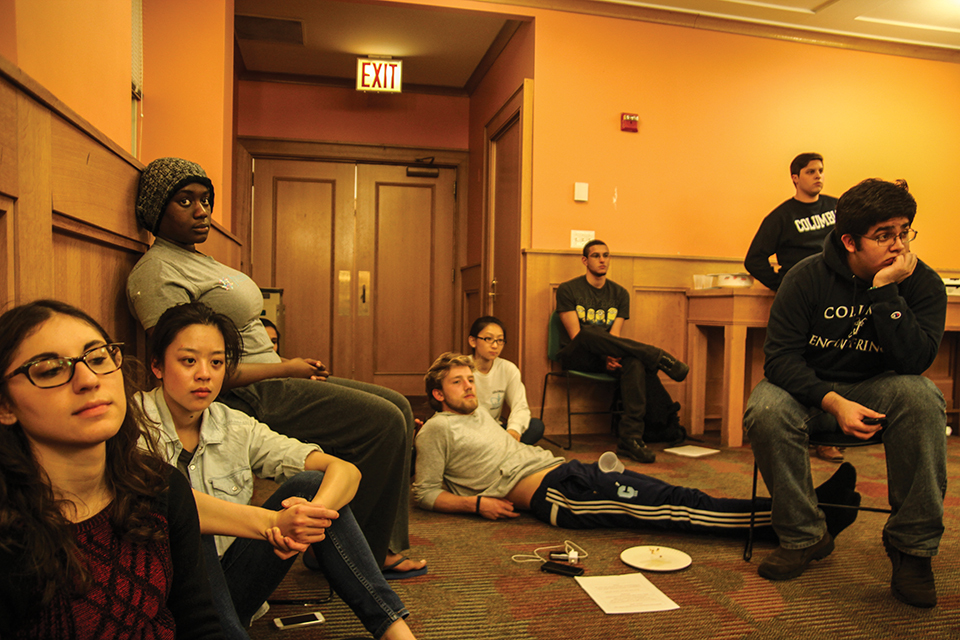 New changes to the Sexual Respect Initiative will be announced on Tuesday.

Columbia's Sexual Respect and Community Citizenship Initiative, which is required for new students and returning students who have not already completed the program, will offer a greater variety of programming options and give students more time to finish the requirement than last year. The initiative will be unveiled to students by email on Tuesday.

This update to the initiative—one of the first and most comprehensive sexual respect programs in the nation—comes after last year's implementation led to student frustrations about the inadequacy of the arts option, technical glitches with workshop registration, and the lack of time to complete the requirement.

"The goal here is to encourage students to be reflecting and acting throughout the school year on the link between sexual respect and being a student at Columbia," Executive Vice President for University Life Suzanne Goldberg said.

After discussions with focus groups and both professional and student evaluations of last year's SRI, the Office of University Life has updated the initiative to offer a greater variety of choices within each option for students to complete the requirement. 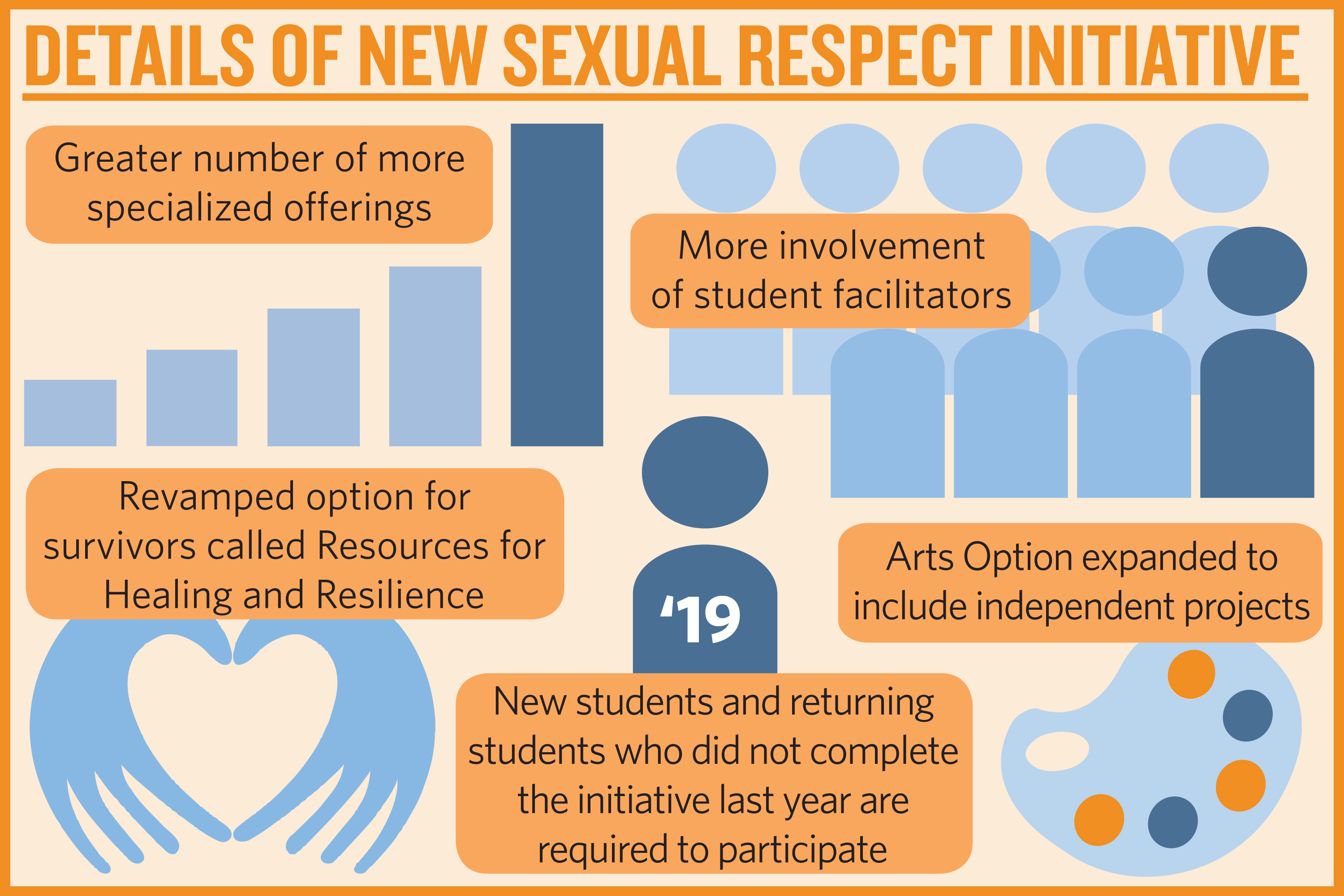 A new option called Independent Projects will allow students to design their own activities for fulfillment of the requirement, either individually or as a group.

"Students can host events, do reading groups, do self-studies. They can create art," Goldberg said of the new addition. "It's really a chance for Columbia students to embrace their creativity in thinking about the link between sexual respect and community citizenship."

This program—one of five ways in which students can complete the requirement—will also be the home of last year's arts option, which asked students to submit a piece of visual or performance art in response to a prompt about sexual respect.

Students critical of last year's arts option said the option did not adequately teach students about sexual violence in the way that workshops could have, and that there was no way to truly validate if a student retained the material.

Coalition Against Sexual Violence member Abby Porter, CC '17, said she thinks the Independent Projects option sounds great, but is still unsure of whether the University will be able to implement the program on such a large scale.

"It's all about the follow-through," Porter said. "It's going to come down to whether these proposals are being carefully read and whether students will actually be held to complete the proposals they submitted."

Students will submit their Independent Project proposals for approval to Sexual Respect Initiative Coordinator Maria Quinn, Mailman '15, a new hire in the Office of University Life and the main point of contact for the initiative. Proposals will then be reviewed collectively by the office staff.

No Red Tape prevention coordinator Michela Weihl, BC '17, said that she is concerned with the lack of guidance and feedback involved in the Independent Projects.

"It's not that there can't be a lot of power in independent work," Weihl said. "I think for an issue like this, if the goal is to combat really ingrained ideas, that requires some guidance."

Still, Upasna Saha, CC '19, said that she would be interested doing an independent project.

"It allows the student to approach that idea and engage with it in a medium in which they feel most comfortable," Saha said. "It's a really nice, personal way to allow someone on their own time to process and understand what this means to them and articulate it how they please."

A greater variety of workshop options will also be available to students, including a continuation of NSOP's Step UP! and Get SAVI program from orientation, and one workshop geared toward international students.

Barnard has elected to conduct its own sexual education activity, Being Barnard, and will not participate in the SRI. Goldberg says she hopes Barnard students will be able to attend the film screenings, but first needs to figure out the logistics to ensure that there will be enough space to allow students who are required to participate in the SRI to attend.

Graduate students will have the option to complete an online interactive survey called Think About It. The survey is administered by a company called Campus Clarity, and aims to reduce risky student behavior on campus, according to the company's website.

Like Weihl, Porter's chief complaint was that the new SRI was only required for new students and not those who completed it last year.

"It's really contradictory to the goal we had when we were working on consent education," Porter said.

However, Porter said she was satisfied to see options specialized for grad students.

"That was something we really pushed for and is promising to see," Porter said. "I hope that will be extended to GS students who are more similar in age to grad students than they are to undergraduates."

In addition to the new workshops and films, existing options have also been updated.

Some students last year felt triggered by some of the content of the SRI workshops, pointing to one in which facilitators allegedly handed attendees a worksheet with a graphic description of a sexual assault case.

In order to avoid the technical difficulties that arose last year, the Office of University Life will store sign-up forms and information about available workshops on the Sexual Respect website, though completion of the requirements will be tracked separately on CourseWorks.

Students who indicated they wanted to get more involved after last year's SRI were invited to participate in vetting workshops for the new initiative and stand on student advisory committees.

For Adam Alpert, CC '19, the initiative as a whole is a good effort on the part of the University to to continue the discussion of sexual violence beyond new student orientation.

"I don't think it's a big deal that it's required," he said. "The people who don't think they're going to get anything out of it will probably continue to be in that mindset. I don't think you're going to change those people's minds."

Correction: A previous version of this article said that Maria Quinn was the sole reviewer of Independent Projects proposals, and that the online resources provided through Resilience for Healing were limited to survivors of sexual assault. In fact, the proposals will be reviewed collectively by the Office of University Life staff, and the online resources are available to all. Spectator regrets the errors.