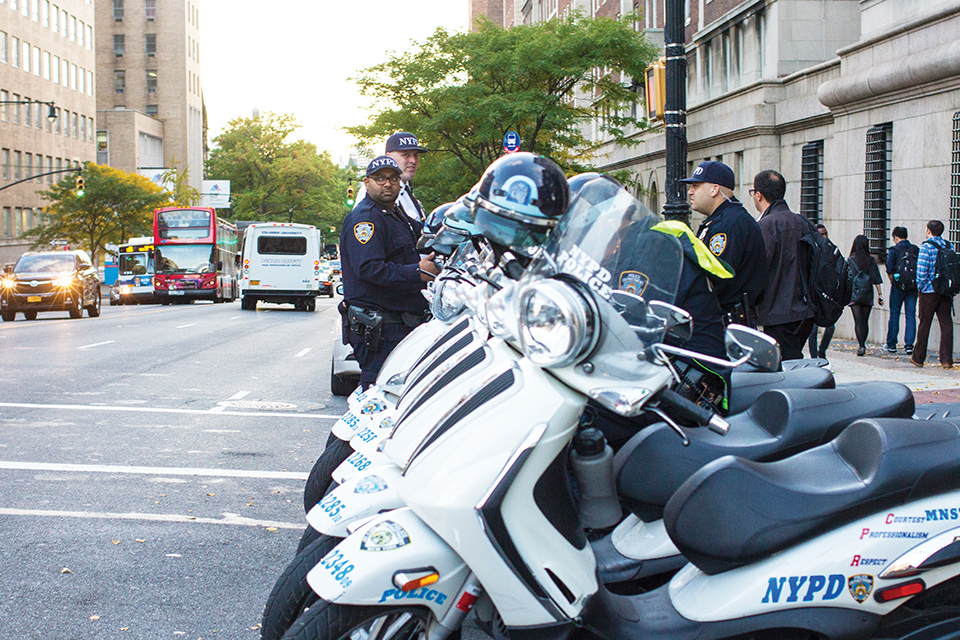 NYPD officers line up their vehicles in front of the Amsterdam gate of College Walk; the boundaries of campus are unclear, allowing police to encroach upon Columbia's private property.

After students and Spectator's Editorial Board expressed concerns about police presence on campus during Columbia Divest for Climate Justice's protest last week on Low Steps, the University told Spectator in a statement that Public Safety did not communicate with NYPD leading up to the protest.

"The University's Division of Public Safety neither alerted the NYPD to this on-campus event, nor invited them onto campus," the statement said. "For its part, the NYPD did not tell the University to expect any irregular police presence, and we had no advance notice."

The statement confirmed that police officers were present on College Walk, and said that after Vice President for Public Safety Jim McShane became aware of their presence, he "immediately requested that they depart." It also noted that the University "saw no reason for concern about security around the Climate Divest demonstration" and "believes strongly that Columbia students should be able to peacefully exercise their free speech rights."

The University Rules of Conduct stipulate that that the executive committee of the senate must approve any request on the part of the president to bring police onto campus, barring events in which there is a clear and present danger to the Columbia community.

Student concern about police presence on campus is not new. Following the Eric Garner decision last December, a student-organized die-in during the annual Tree Lighting Ceremony was disrupted by the arrival of NYPD squad vans during the students' march down 114th street.

In response to complaints about the mobilized units, Sharyn O'Halloran, the chair of the senate executive committee, assured attendees at the following plenary that police were never called to campus.

At that plenary, O'Halloran made the distinction between calling police onto campus and notifying them of protests on campus. She suggested that Public Safety might have been in contact with the NYPD about the die-in, but said that the police were never called to come to campus.

"Whenever there is a demonstration or protest, Jim McShane does reach out to the police just to notify of them of events," O'Halloran said. "Not that they're going to come on campus, but because sometimes there are issues around outside, so that could be a standard protocol that does take place."

Though the rules themselves do not explicitly define the boundaries of "campus," the University spokesperson said that the term encompasses all Columbia facilities.

"The Rules of Conduct apply to all campus buildings and grounds, and that's whether they're bounded by 114th, Amsterdam, Broadway, 120th or not," the spokesperson said. The spokesperson noted that the sidewalks and streets outside the University are city property.

As a result, the procedures enumerated in the rules do not apply whenever NYPD congregate on the streets surrounding Columbia's campus, like at last December's die-in.

Even so, many students feel that any police presence on or around campus is unwarranted and inappropriate.

"The presence of police has always made me feel uneasy, and I feel that I'm not the only one saying that," Damon Xavier, CC '17 and a member of Students Against Mass Incarceration, said. "So having the police there for a nonviolent demonstration is complete overkill."

Xavier also pushed back against Public Safety's practice of notifying the NYPD when demonstrations occur on campus.

"It defeats the purpose of the demonstration, which is not to incite violence, but to incite some sort of positive action," he said.

Mikayla Petchell, CC '18 and a member of CDCJ, agreed, and said she thought the practice "sets up an adversarial relationship between students and our administration."

"I honestly cannot think of any situation in which it would be merited for public safety to contact the NYPD because of a student protest, particularly a student protest that has gone through all the proper avenues," Petchell said.

But Arabelle Chafé, SEAS '18, said that she thinks police presence on campus is often merited.

"These activists often resort to scare tactics and other behaviors that detract from the generally pleasant atmosphere on our beautiful campus," Chafé said. "When protesters cross the line, it is Columbia's responsibility to use appropriate methods to keep students in check."

Still, many students feel uneasy when they see police around campus.

"I think instinctively, when I see a gathering of police officers—especially if that presence were on Columbia's quad—I figure there must be something wrong," David Golombeck, GS '18, said.