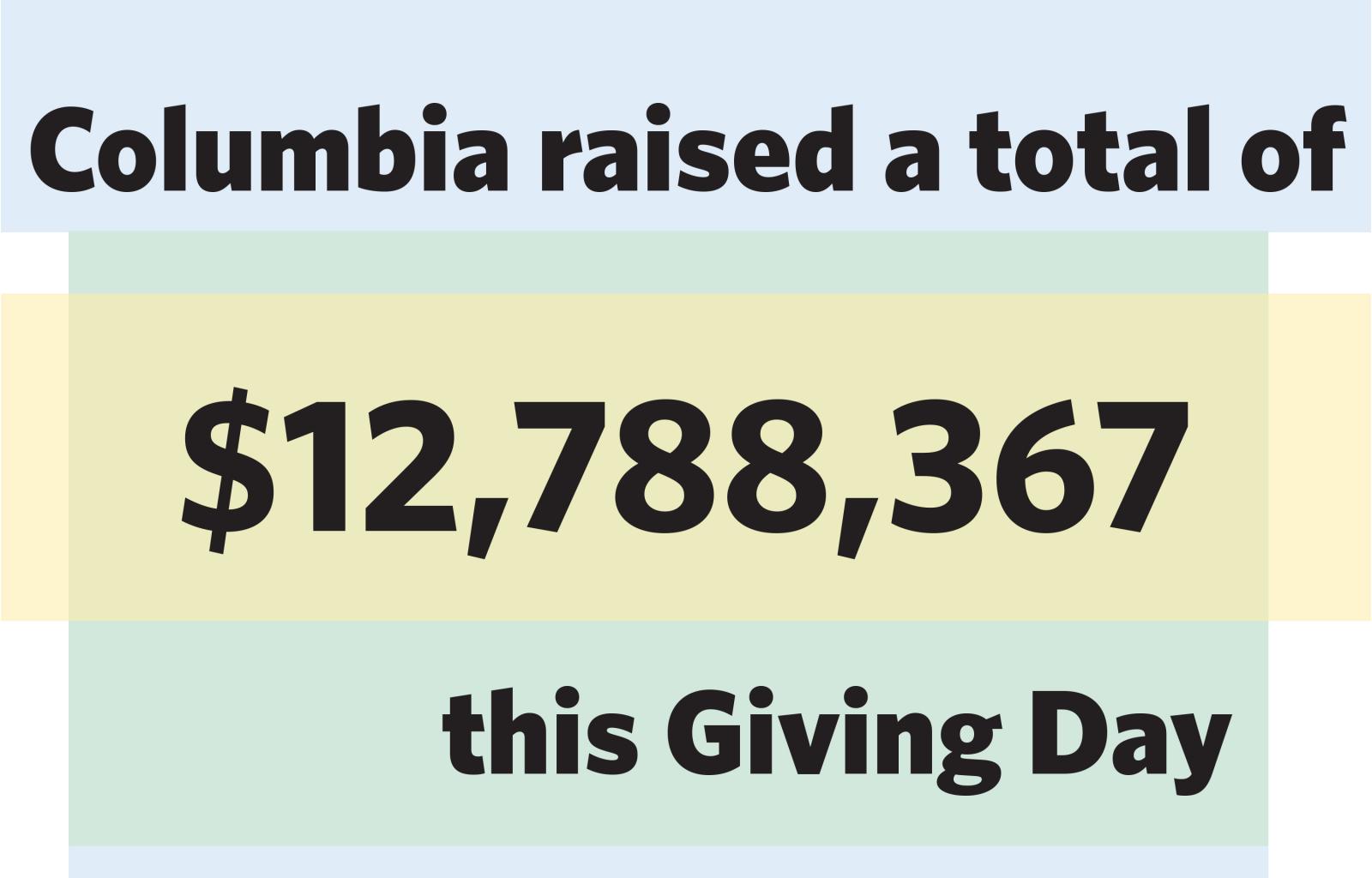 The funds raised were the result of 13,090 individual gifts to 19 schools and programs within the University. Columbia College, Columbia Athletics, and the Business School received the most donations, bringing in over $3 million, $2 million, and $1 million, respectively.

The event's webpage promoted the slogan "Change Lives, Change the World," and shared the stories of a handful of Columbia students, faculty, and alumni "who are changing the world through research, hard work, and a commitment to helping others." The website also included a social media campaign to encourage Columbia alumni to donate.

To promote the event, Tom Harford, dean of students for the School of General Studies, continued his tradition of allowing GS students who either bought tickets or posted a selfie on the school's Facebook page to drench him in water.

The event also gained publicity when musician Jason Mraz took to social media to express his support for Giving Day.

Carmen Cusido, Journalism '10, appreciated the efforts that event organizers made to bring the alumni community together through social media.

"I kind of like the camaraderie of it: 'Everybody's in this together, let's kind of get on social media, let's all get on board,'" Cusido said. "I really like that."

According to Cusido, the improvements that the Journalism School made to its financial support policies for part-time students prompted her to donate to the school on Wednesday.

"I've noticed that the Journalism School does provide more financial support for part-timers, which is great, because I sought a lot of private scholarships and I took a lot of loans," Cusido said. "For me, any way I can give back, whether it's my time or whether it's money, I happily do so because I am very proud of my education."

Some alumni, however, said that their dissatisfaction with the University's current sexual assault policy kept them from writing checks on Wednesday.

"I won't donate until the University reforms its sexual assault policy," Garnet Henderson, CC '13, said. "[The University's] argument was that not donating now disservices students currently on campus. I actually think that upholding the status quo is worse than perhaps creating a tiny disadvantage by not giving what little money I might have to give."

Brenda Salinas, CC '12, also said she wouldn't donate to the University until it reformed its sexual assault policy. According to Salinas, the best way to push for these reforms is to withhold donations until the University makes a change.

The number of alumni who don't want to give to Columbia notwithstanding, Christina Sebastian, director for Annual Fund Programs at the Office of Alumni and Development, sees this year's Giving Day as a big success.

"It is more than alumni, you know. Our focus truly is on alums and parents and the other students and faculty and staff," Sebastian said. "And this year, we've seen the highest collaboration with schools and units participating in Giving Day."

Sebastian also noted that Giving Day has benefited from an increase in name recognition among alumni over the past couple of years.

"It's funny—I think back to Alumni Leaders Weekend that was held earlier this month, and I remember attending it two years ago and having to explain Columbia Giving Day," Sebastian said. "And this year, people passed me by after the discussion I was leading and talked about how great the day was to reconnect with the Columbia community and to one another in a very personal way."