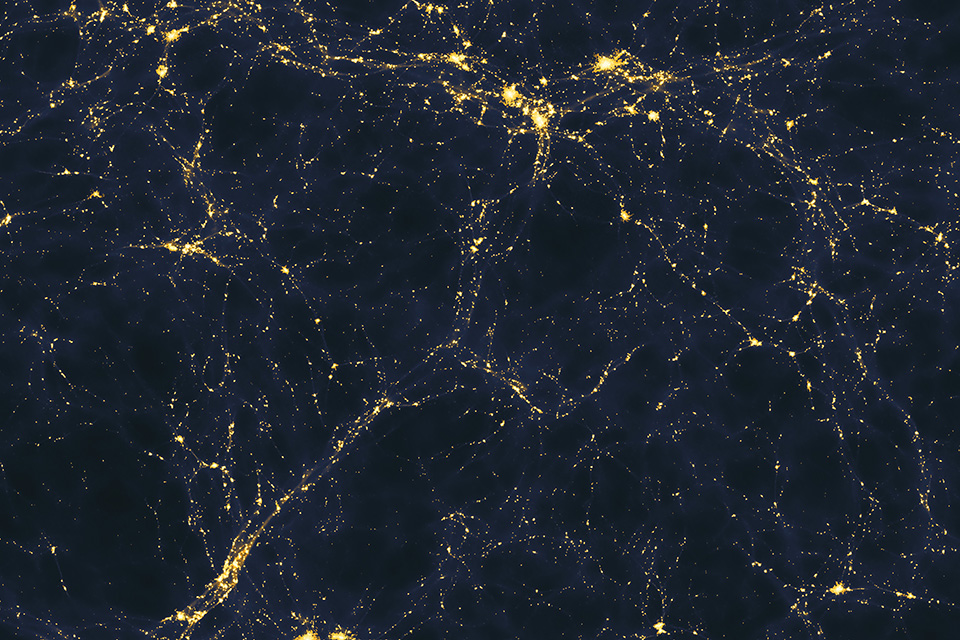 A computer simulation of the large-scale structure of the universe. Haiman's team are investigating this structure to learn more about dark energy.

Updated at 8:32 p.m.
Zoltán Haiman and his team are investigating dark energy.

The good news is that dark energy makes up about 70 percent of the universe. The bad news is that it's an invisible, intangible force that's almost impossible to measure.

To measure it, Haiman, an astronomy professor, is trying something a little unorthodox: facial recognition software. Professor of computer science Daniel Hsu is working with Haiman and his team to use this software to analyze photos of billions of galaxies.

The preliminary results of this research, which is supported by a two-year, $200,000 grant from the Office of the Provost, are detailed in a pair of papers published in Physical Review D earlier this year.

The team's hope is that their new approach to analyzing data will yield answers about the nature of dark energy and help determine which theoretical models of dark energy are accurate.

Dark energy isn't just of interest because of how much of it there is. It's also responsible for one of the biggest mysteries in physics: the accelerating expansion of the universe.

"From the astrophysical point of view, dark energy is still like a very open question, an unsolved mystery," Andrea Petri, a graduate student in the physics department, said.

For decades, scientists thought that the expansion of the universe would eventually decelerate after the initial push from the Big Bang because of gravity's attractive force. Accelerating expansion was first observed in 1998. Almost 20 years later, dark energy and its "negative gravity," which makes the universe grow faster and faster, remain as much a mystery.

Because dark matter, unlike dark energy, is subject to gravity, it tends to clump together in galaxies and in strands between galaxies, forming a structure similar to a cosmic web.

These strands are composed of so much dark matter that they actually curve space with their mass and act as a lens. Light going through these dark-matter structures is bent slightly, in much the same way that light is refracted through water. By measuring how much that light is bent, researchers can better determine the structure of dark matter.

What does this all have to do with dark energy?

Dark energy lacks structure. In order to observe it, Haiman must instead examine its effect on dark matter's structures, which it expands. To sum up his investigation, he said, "The growth rate of these structures and the mean distances between structures is determined by dark energy—the structures themselves are composed of dark matter."

It's here in the analysis of these structures that computer science comes in. To figure out which theory of dark energy is correct, Haiman's team must compare theoretical maps with actual observations.

Petri, who works on the computer science side of the project, said that some of the software he uses closely resembles real facial recognition software. Like programs that detect the differences between human faces, the software uses a technique called dimensionality reduction to break down images into numbers that can be compared.

"When you look at a face, you have basically many pixels, so you basically want to find some pattern in how these pixels are arranged," Petri said.

According to Petri, information about these pixels is encoded into numbers so that the computer can "recognize" one face from another.

"In astrophysics we have other kinds of features we measure," he said. "The algorithm behind it is the same—the only thing that changes is what you're looking at."

Because Haiman and his team are still doing theoretical work, the end result of this project remains to be seen. Still, Liu said that she thinks there are real benefits to Haiman's collaboration with computer scientists.

"In my opinion, maybe they are not so much biased by old techniques," Liu said. "They don't know what's going on in cosmology, so they have new ideas and they wouldn't be biased by opinions that are popular in this field."

Despite cosmology's focus on remote heavens, Haiman also believes in the earthly significance of his investigation. When asked why the public should care about his research, he cited a quote by Robert Wilson, an American physicist who defended the value of his theoretical work in front of Congress in 1969: "It only has to do with the respect with which we regard one another, the dignity of men, our love of culture. It has to do with those things."