No Red Tape calls for increased sensitivity, support for survivors from marginalized identities at speak-out

No Red Tape calls for increased sensitivity, support for survivors from marginalized identities at speak-out 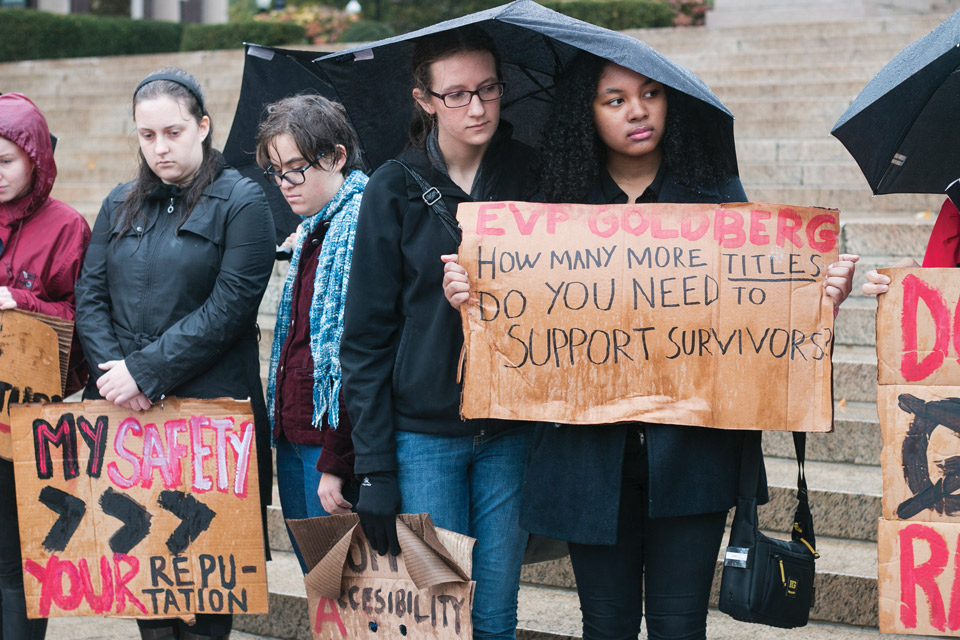 Members of No Red Tape holding their first action of the semester.

Brandee Blocker, Law '17, said she never expected she would be protesting the way Columbia responded to her reports of sexual assault.

But Blocker was one of about 20 members of No Red Tape who participated in a speak-out on Wednesday—the first held by the group since it experienced large turnover over the summer—to highlight the overlap between institutionalized discrimination and the handling of sexual assault at Columbia.

The protest, which was titled "Demand a SAAFE Columbia," used the acronym SAAFE to frame the group's five major demands—support, accessibility, accountability, funding, and enforcement—that members want Columbia to provide to students of all identities.

"This rally explicitly calls attention to the various intersections of oppression," No Red Tape organizer Michela Weihl, BC '17, said. "The title was an intentional attempt to call out what safety would look like on this campus if it really were protecting everyone."

Organizers said the goal of the rally was to feature the stories of survivors from marginalized communities in order to underscore how race, class, and other identity-based factors affect  support from the University.

Blocker, a member of the Black Law Students Association, which co-sponsored the rally, said she was frustrated with the University's response after she approached several offices to report her experience of sexual assault.

"The Sexual Violence Response advocate provided me with nothing in the way of immediate support or advocacy, and even encouraged me to go the chaplain's office instead of reporting my assailant formally out of 'racial solidarity,'" Blocker said.

She added that after a Law School counselor did not attend an initial meeting after Blocker waited for three weeks, she was then assigned to a new counselor—who Blocker said asked her, "Do you want help now or do you want somebody black?"

"In my opinion, that's worse than incompetence," Blocker said. "That is deliberately working against me."

In a list of demands the group submitted to administrators, No Red Tape requested increased cultural sensitivity for sexual assault responders, as well as heightened transparency on employee training and qualifications.

"We don't know how much training these people get or what it looks like," Weihl said. "We want to look at how the adjudication process does not involve people of color or women, and that's unacceptable for situations when we are trying to represent people."

No Red Tape member Amelia Roskin-Frazee, CC '19, said during the speak-out that when she called SVR's 24/7 hotline after being assaulted three weeks ago, the responder allegedly told her that she should have been on birth control.

"As a survivor who is lesbian, that is not something I need to hear," Roskin-Frazee said. "In general, survivors who don't fit the stereotypical narrative of what a survivor is supposed to look like are doubted—they're ignored, their stories are picked apart even more."

In its list of demands, No Red Tape also asks that students be allowed to have both a lawyer and a loved one by their side.

Blocker said that she brought her fiancé to the adjudication because the current policy forces students to choose between moral and legal support.

"You have to choose between legal representation and moral support," Blocker said.

Organizers also said that aside from being revised to exclude triggering language, Clery Crime Alerts—federally-mandated reports sent to all students regarding crimes on and around campus—should come after all instances of sexual assault, including those committed by Columbia affiliates.

"There's the standard rape narrative of a man of color jumping out of a bush and assaulting a white woman, and that is reflected in the crime alerts, which are only sent when it's a man of color who doesn't go to Columbia," Weihl said. "That paints a picture that is not reflective of who is unsafe and who the [Public] Safety is trying to protect."

Additionally, protestors said that students should be able to ask for accommodations without instigating an investigation, requesting that confidential services such as the Office of Disability Services and Health Services not be obligated to report cases of sexual assault.

"I would note that the Gender-Based Misconduct Office already provides multiple opportunities for anonymous feedback for all students who are complainants or respondents in the disciplinary process," Goldberg said in an email. "Students receive a letter and a link for anonymous feedback at the end of each stage of the process."

Goldberg also pointed towards the Sexual Respect website, which she said includes detailed information in the "I Need Help. Where Do I Go?" section about confidential resources both on- and off-campus.

Still, Blocker said that the addition of eight new staff members at Counseling and Psychological Services, including two clinicians who specialize in trauma response, is more an act of placation by the University than a genuine effort to help students who have experienced sexual assault.

In addition, members of No Red Tape expressed concern over Goldberg's recent appointment to the position of rules administrator, through which she would have oversight over all demonstrations on campus—including ones that protest her work in the Office of University Life, such as Demand a SAAFE Columbia.

Although she indicated in a letter to University President Lee Bollinger that she did not want to live out the rest of her days at Columbia in protest, Blocker said today that the University has been inactive and she will continue to protest until her voice is heard.

"Nobody wants to protest in the rain," Blocker said. "But when students aren't being listened to, the only thing we can do is yell and make noise."