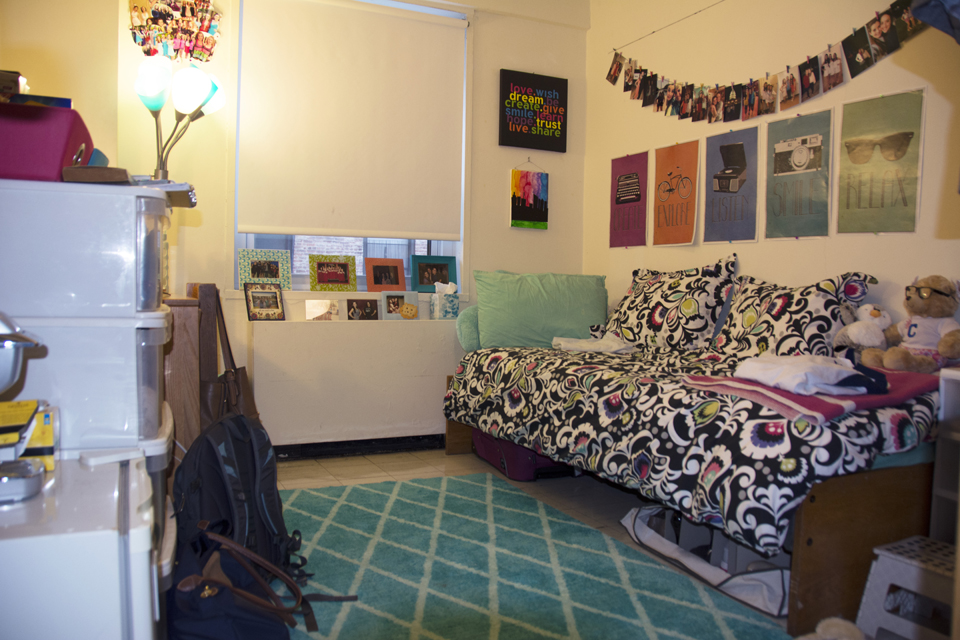 Plimpton Hall's status as winter break housing has not been addressed by Barnard administration, despite 160+ responses from an SGA survey.

The new policy only allows students who hold "mission critical" roles, such as being an admissions tour guide or varsity athlete competing in tournaments over the break, to remain on campus during the first part of the winter break.

In the past, students with internships in the city or on-campus jobs and seniors doing on-campus thesis research have been eligible for winter break housing. Unlike Columbia—where all students are allowed unrestricted free access to Columbia dorms during winter break—the few Barnard students who are allowed to remain in housing will pay a fee.

In a survey sent out by the Student Government Association seeking input on the new policy, every student who responded—a total of over 160 students—said that they oppose the updated policy, with 20 respondents describing how they were negatively affected firsthand, according to SGA President Shivani Vikuntam, BC '16.

"The tone of the responses was of anger and frustration," Vikuntam said in an email to Spectator. "Students raised many issues, such as the need to work in NYC over the break, having the cost of traveling home be too much of a financial burden, and feeling unsafe returning home."

But when the SGA executive board met with Dean of the College Avis Hinkson a week after the survey opened on Sept. 21, Hinkson said that only a handful of students met the college's requirement last year for winter break housing and she would not consider changing the policy for the current academic year.

"Staff are hired and are allowed a certain number of vacation days and so forth," Hinkson said in an interview on Wednesday. "By saying that we are closed over a period of time, it allows people to take vacation time in a very focused way as opposed to spreading it out over time when we are supposed to be fully staffed and when students are here in much larger numbers."

Hinkson declined to specify the financial costs incurred by keeping resources—which could potentially include the cost of security, electricity, and maintenance—available over the break.

Despite Hinkson's initial feedback, SGA decided to keep the survey open to allow for more students to voice their concerns, according to Vikuntam. But on Oct. 5, two weeks after the survey was released, SGA was advised by administrators to take the survey down.

"Our adviser [Associate Dean for Student Life Alina Wong] suggested that SGA remove the form from their weekly student-body wide email and that SGA focus on communicating what we have learned about the policy to students rather than continuing to challenge it," Vikuntam wrote in the same email.

Though the most recent update to the policy was announced last spring, Hinkson said that the college had made the decision three years ago to gradually phase out winter break housing by reducing the number of students eligible to remain on campus each year.

"The reality is that when we have students present, we do need to be able to provide resources for them," Hinkson said. "As the need for resources has increased in different ways, we have to, at times, continue to change." 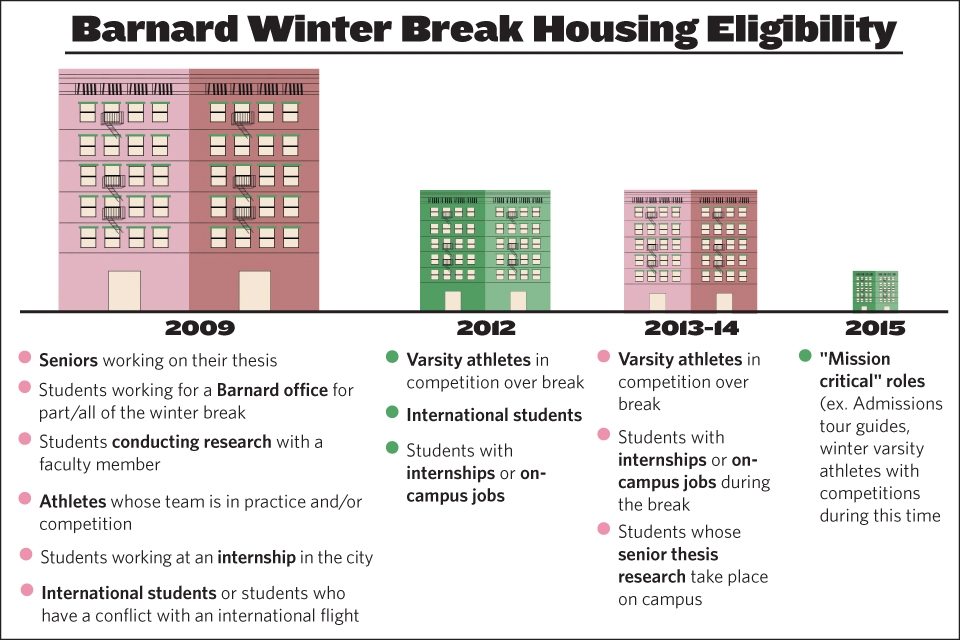 Prior to 2014, at which time winter break housing was restricted to just Plimpton Hall, the Quad, 600 West 116th St., 601 West 110th St., Cathedral Gardens, and Plimpton Hall were all open during the break. For the upcoming winter break, only select rooms in Plimpton Hall will be available for "mission critical" students.

Hinkson said the cost to keep services open includes paying Residential Life & Housing staff members to work over the break, but would not share how much it cost to provide these services.

"The more students we have, the more staff we need to have," she said.

As for 600 West 116th St., 620 West 116th St., and 601 West 110th St. dorms, which also house non-student residents, Hinkson said that the college does not allow students to use those buildings over break because a ResLife staff member would have to be on duty if students were allowed to stay there over break.

For students seeking winter break housing who do not possess "mission critical" roles, Hinkson suggested that students take it upon themselves to find alternate accommodations.

"Students could certainly look into house-sitting as something that I know students have done in the past in the neighborhood," Hinkson said. "I also know of another student who was a nanny over the holiday last year."

Those who have individual concerns are encouraged to speak with Hinkson, ResLife staff, or class deans "if they need help thinking through their plan," Hinkson said.

But for Toni Airaksinen, BC '18, who has worked with Columbia First-Generation Low-Income Partnership, going to administrators for help has not always been a positive experience.

"A lot of people I know who are facing this have had really negative times with administrators already, and so there are a lot of people who don't want to try to bring it up with the administration, again, because of the bad experience that they had," Airaksinen said.

"There's also this kind of this stigma that they're trying to avoid," she added. "I know a person [Barnard student] who basically almost had to live in a homeless shelter over winter break last year ... before one of her friends swooped in and saved the day and gave her a room in her apartment."

Despite the recent SGA survey, Airaksinen said there is a sense that Barnard administrators still don't understand the extent of the situation because of a lack of communication with students.

"There's been no outreach from the administration to students to give them a place to voice their opinion and voice their concerns about experience," Airaksinen said.

For Morgan Crist, BC '19, the decision to further restrict housing has the potential to be alienating for some students.

"I definitely understand where Barnard is coming from because it is not easy or lucrative to keep all of the dorms open over a three- or four-week break," Crist said. "But I think by closing all of them they are really sending a message that students that have maybe financial or different family issues, that they're not welcome at Barnard over breaks."

Airaksinen said that the issue boils down to whether or not the college has a "moral imperative to help students."

"I hope in the future they'll have at least one residence hall open," Crist said. "I hope they'll kind of make a statement that this is our home."