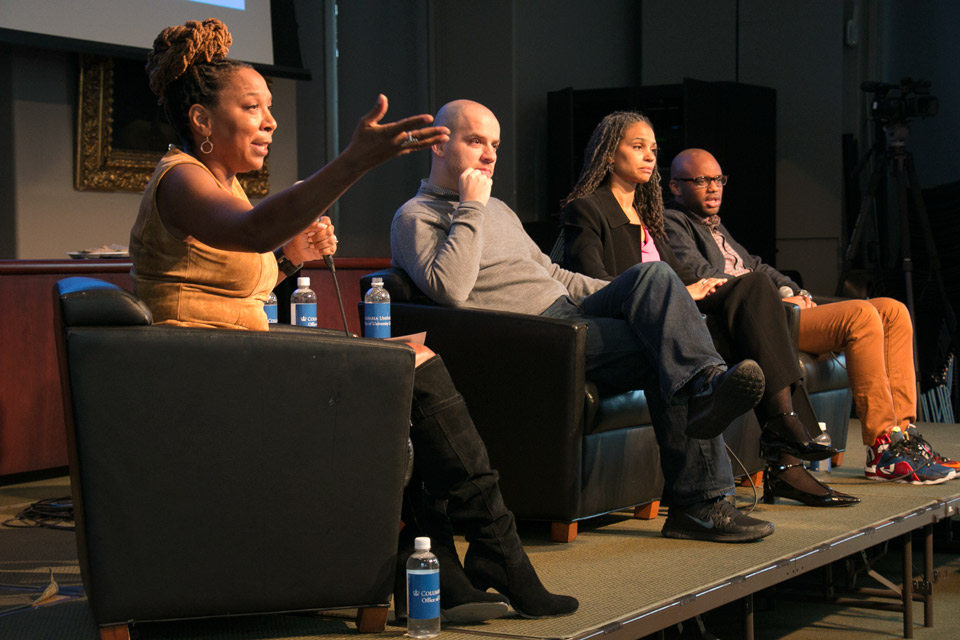 Thursday's Awakening our Democracy panel featured Kimberlé Crenshaw (moderator), Michael Skolnik, Maya Wiley, and Mychal Denzel Smith. The focus of the panel was on the intersection of race, violence, policing, and community safety.

The Black Lives Matter movement and democracy were up for discussion at the second installment of Awakening Our Democracy on Tuesday.

Awakening Our Democracy, a conversation series sponsored by the Office of University Life, aims to spark campus conversation about race, ethnicity, inequality, and justice in America. The series is a part of a larger attempt by the office, under Executive Vice President Suzanne Goldberg, to engage with students on challenging contemporary issues.

The office launched the series on Oct. 19 with a discussion on immigration and the American dream.

The latest installment, titled "Ferguson, Charleston & Beyond," focused on racial tensions in the past year, and how democracy both threatens and upholds current movements.

Moderated by Columbia law professor Kimberlé Crenshaw, founding coordinator of the Critical Race Theory Workshop and co-founder and executive director of the African American Policy Forum, the panel, which included voices from both media and government, spoke to a packed room.

Skolnik opened the panel with a discussion of structural racism and white male privilege in America.

Smith gave an example of how even the hope President Barack Obama's 2008 election inspired among black people was later shattered with the murder of Trayvon Martin.

"What else were we supposed to do but take to the streets and start breaking things?" Smith said.

The panelists also discussed the role of social and mainstream media in reporting racialized events in the Black Lives Matter movement .

Skolnik said that the movement has changed because people no longer need to rely on traditional media to tell their stories.

"Young people are saying, 'We have the power to tell our own stories whether you like it or not,'" Skolnik said. "'And we are going to force you to put it on national television and the front page of newspapers.'"

While discussing media, Smith and Skolnik said that current media narrative emphasizes the "lone wolf" approach in describing actors such as Dylann Roof, who shot nine black parishioners in a South Carolina church in June.

Skolnik said that this approach ignores the historical context of hate crime perpetrators, and makes Roof's actions seem isolated from a system of beliefs.

Crenshaw added that Roof could instead be viewed as a terrorist acting on a belief held by others.

In talking about reform and current solutions that are proposed, Wiley addressed policies that the mayor's office is currently working on to dismantle structures of racism. She emphasized the creation of universal pre-kindergarten and addressing implicit bias in the workforce.

The panel closed with a question and answer period, where audience members asked questions on a range of topics including climate change, bail reform, the role of black journalists, and the confluence of race and gender, including a brief discussion of Emma Sulkowicz.

"The three presenters were very knowledgable about different topics and able to talk about them, so that everyone could relate and understand," Holman said. "It was great, really insightful, and I'm glad I came out."

Goldberg said she hopes students will feel encouraged to continue the conversation in the "Ideas and Action" section of the office's website by submitting their responses to the events as well as requests for future topics.

"If you are inspired, please send us a post that we can post to the University website," Goldberg said. "You can get your ideas out there, and we encourage and invite you to do that."

Ultimately, panelists touched on the next steps for the movement.