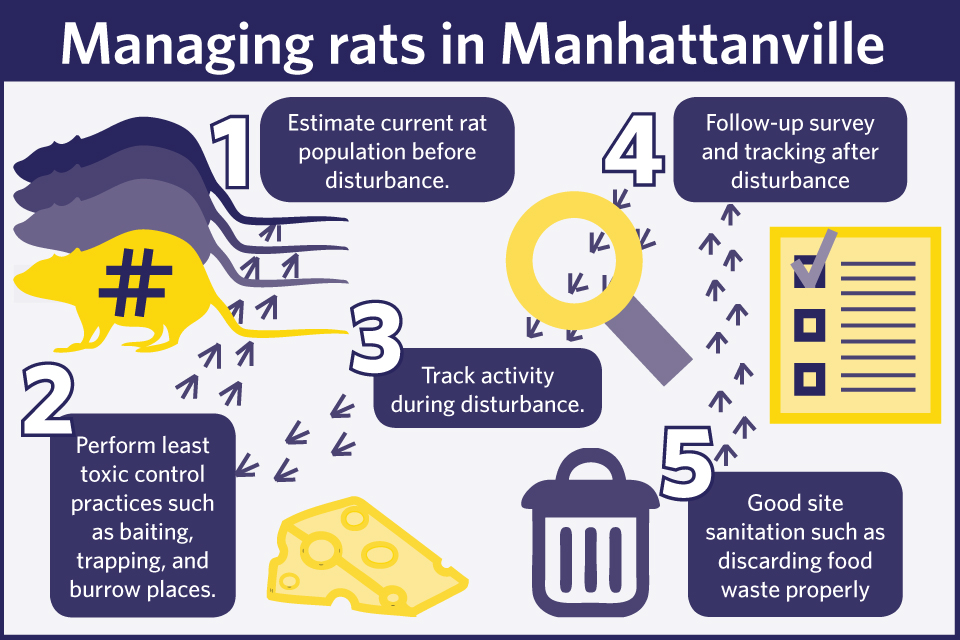 On the battleground of Manhattanville, the University is waging—and winning—a war on rats.

Construction for the new campus, located just 10 blocks north of Columbia's Morningside Heights campus, began in 2008. Manhattanville, a cornerstone of University President Lee Bollinger's tenure, is intended to alleviate existing space problems on the Morningside campus. The first buildings—the Jerome L. Greene Science Center and the Lenfest Center of the Arts—are set to open in fall 2016.

Since work began on the new campus, pest control has been a crucial consideration for the Manhattanville development team. Before demolition even commenced, the team began working to control and eliminate rodents at Manhattanville—work that will continue even once the buildings have opened.

"This is a continuum for us," Philip Pitruzzello, senior vice president of Manhattanville Development, said. "We don't just wash our hands at the end of construction."

In 2008, Columbia hired Dr. Jill Gordon, an urban entomologist, rodentologist, and expert on integrated pest management, to lead the management of rodents on site. Gordon described her work as occurring in two stages: pre-demolition and post-demolition.

Gordon works to ensure that the site is well-sealed by barricades to prevent rodents in the neighborhood from entering the construction zone, which is currently in the post-demolition phase. Gordon reported that the pest control company she oversees checks weekly for activity in the approximately 200 bait traps on site, which are set up roughly every 50 feet along the perimeter.

Gordon, who continues to visit and inspect the site, said that the Manhattanville campus is "incredibly clean" compared to other sites she's worked on. One of the most important features she's introduced has been the use of secure metal trash cans with lids and black trash bags, which are emptied every night to ensure that food that may attract rodents is properly disposed of.

"This takes a lot of the interest of the site out for the rats," Gordon said. "Our goal has shifted from cleaning the buildings to keeping out rats from the neighborhood."

When inspecting the site, Gordon looks for burrows—underground pathways dug by rodents—and checks for activity in traps. If there has been activity or she finds burrows, Gordon reports that more traps are needed.

But Gordon's involvement in overseeing integrated pest management at Manhattanville began before the demolition phase, in which buildings at the site were destroyed to clear space for new buildings.

She also worked with the building's architects during the design process, advising them on how best to design the buildings to minimize rodent activity, and surveyed the sewers on site. Gordon said after investigating the sewers, she found "little to no rats."

As the opening dates for both the Jerome L. Greene Science Center and the Lenfest Center of the Arts draw closer, Gordon will continue to monitor the state of rodents at Manhattanville, and work to ensure that the wave of people coming to the new campus doesn't attract rats.

"Lazy pest control is putting out poison and coming back a few weeks later," Gordon said. "Good pest control is time-consuming, and it involves thinking about where [the rats] will be."