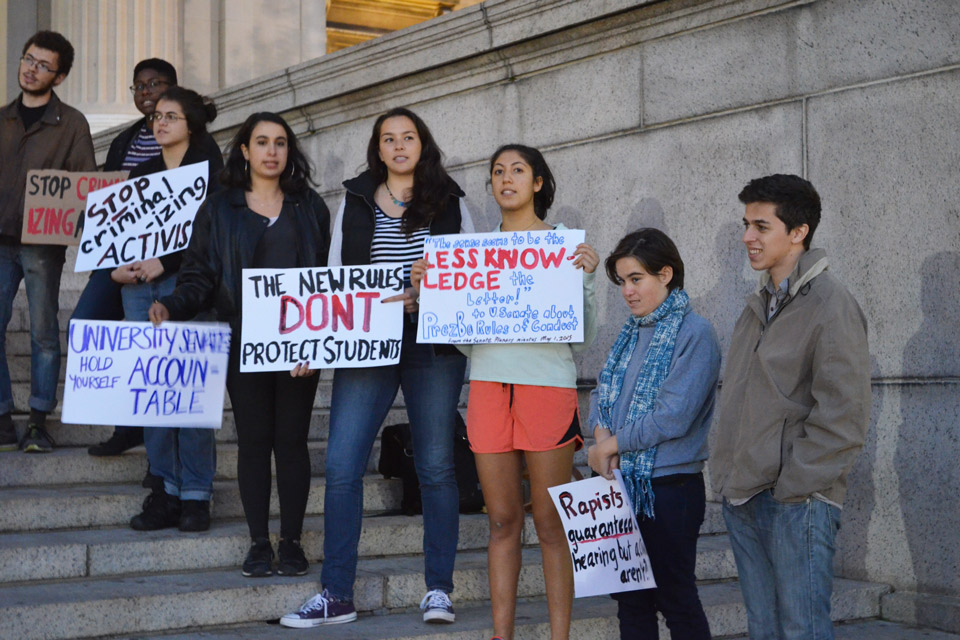 Students from various groups gathered on Low Steps Sunday afternoon to protest the Rules of Conduct.

About 15 student activists protested what they called a lack of transparency in the student-appointment process for the newly created University Judicial Board, and its ability to deny hearings for student respondents.

The UJB—a group of five University members that determines whether students acted in violation of the Rules of University Conduct—was created as part of revisions to the rules passed by the trustees in October.

Though activists directed these concerns to the Senate's Student Affairs Committee—which was conducting interviews of candidates for the UJB—the committee's leadership said that the protests were largely misdirected, because the Senate does not vest the committee with the authority to implement changes to the rules. Implementation of the rules is overseen by the Senate's Rules of University Conduct Committee.

The protest was timed to coincide with SAC's interviews with the first few of 25 student applicants. The committee will choose five students from the group of applicants, each of whom will ultimately fill either one or two spots on the board.

In a letter to SAC, a "coalition of concerned students" from three activist groups—No Red Tape, Columbia Divest for Climate Justice, and Student-Worker Solidarity—demanded that SAC release the names of students who applied for and were selected to the UJB, among other requests.

"The current nomination process for the University Judicial Board's student pool makes clear major issues remain in regards to due process and transparency," the letter said. "The ability of the UJB to deny a hearing to a student by unanimous vote is one of the reasons that the selection process of a student for the UJB so important."

Although activists chanted during the protest that no part of the process was publicized, the executive board of SAC responded by saying it sent two University-wide emails telling students to apply for the board.

"Clearly, it was public enough that they knew the interviews were tonight, and I'm glad they were able to have their voice be a part of the conversation," Chair of the Student Affairs Committee Marc Heinrich, CC '16, said.

Heinrich added that that the application could be found online, stipulated the details of the interview process, and indicated what factors SAC would use to gauge student nominees.

Activists also raised concerns over a new provision in the rules, which states that all hearings are closed to the public unless a respondent submits a written request for an open hearing. In determining whether to accept a student's request, the UJB assesses whether opening a hearing presents a "deterrent or permissive effect on the campus community."

"We want a guaranteed open hearing for anyone who requests that, because the University should not be able to clamp down on speech based on whether they think it's going to incite other people," CDCJ and SWS member Caroline Lee, CC '18, said.

SAC declined activists' request that it release the names of students who applied to be named to the UJB, as well as a matrix of criteria or other set of considerations used to select these students. The committee's leadership told Spectator that they were judging candidates "holistically," while taking into account each student's knowledge of the rules.

Another chief concern for protesters was the prospect of the UJB denying students the right to a hearing.

"Having a hearing is still important for students," Lee said. "Not disputing the evidence, not disputing what the rules administrator says about the facts about what happened, doesn't mean that they're consenting to not having a hearing."

Currently, the rules state that if the UJB unanimously determines a hearing to be unnecessary, such as in the case that a respondent does not dispute relevant facts, the panel can "proceed directly to make a determination, including an explanation of why a hearing is not necessary."

No Red Tape member Amber Officer-Narvasa, CC '18, said the selection process should be public because whoever SAC selects will have the power to deny students hearings.

"We want the community to know what's going on and who will be representing them on this board," Officer-Narvasa said.

SAC leadership also said all candidates it interviewed so far said they would not deny students a hearing.

"It's important to remember that we are picking students to represent students," SAC Vice Chair Emily Moore, a graduate student in SEAS, said. "I don't think it would be an issue that they [a UJB member] would shut down other students."

Although activists united under a common cause, SWS voiced concerns over the UJB's ability to revoke their University-employed jobs, and CDCJ discussed future plans for civil disobedience.

Ultimately, activists agreed that the new rules do not sufficiently protect students rights to due process.

"We want the University Senate to know that we are paying attention to this process," Lee said. "We want to push them to actually represent us because the Student Affairs Committee are all students, and they should know students are concerned about this."

Correction, Nov. 9, 2015: A previous version of this article stated that Emily Moore is a student in GSAS. She is a graduate student in SEAS.