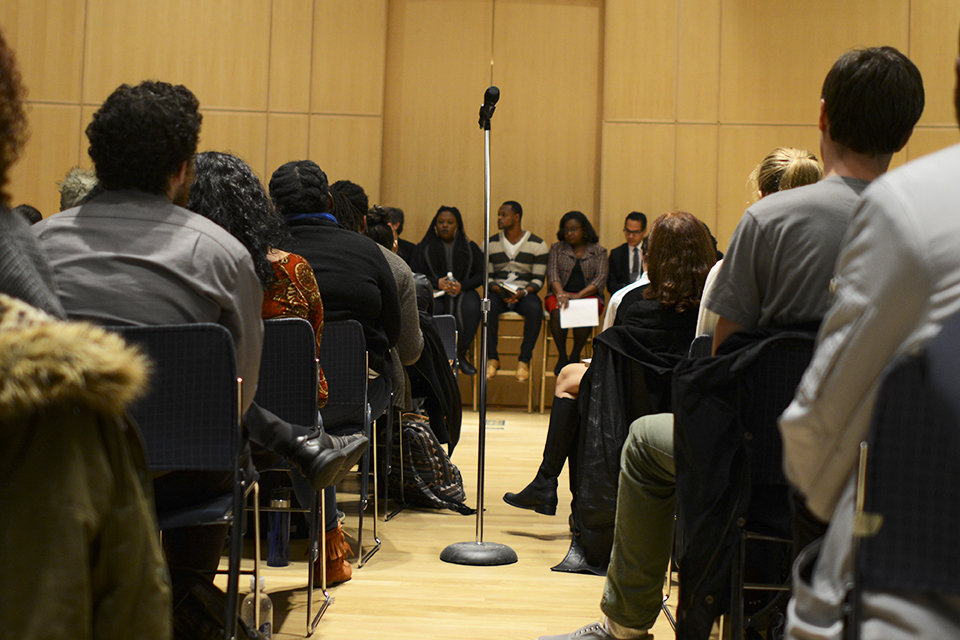 Aya was a panelist at an open discussion on Wednesday evening where students and faculty called for more inclusive curricula and greater centralization of resources for marginalized communities at Columbia—particularly for students of color.

The teach-in and speak-out, titled "Race, Ethnicity and University Life" and moderated by Dean of Social Science Alondra Nelson, was organized by the Office of University Life to address institutionalized racism in light of nationwide protests regarding the experiences of students of color on college campuses.

[Related: Hundreds of students attend speak-outs in solidarity with Yale, University of Missouri]

"Change is happening, but there's something at the root of the institution that we are not addressing," Aquino said during a panel discussion. "There are still things that are broken."

Devon Wade, a sociology Ph.D. student in the Graduate School of Arts and Sciences, said that it is difficult for marginalized students to come together to affect change because of the University's decentralized organization.

"It seems that there are pockets of action happening in separate places across campus," he said. "Things get done in those spaces, but they aren't extrapolated across schools at Columbia."

As an adviser to the Men of Color Alliance, a program under the OMA that brings together students who are self-identified men of color, Wade said that Columbia could promote accountability at higher levels of the administration by creating a centralized, University-wide diversity office.

Aya echoed Wade's request for more administrative support and said that her own experiences indicate how hard it is for marginalized students to get through the University.

In particular, Aya said that black student activists take on the work that administrators should be doing in terms of supporting each other and opening up spaces such as the Malcolm X Lounge.

"I was brought up by seniors in this institution. I don't know how I could've gotten through freshman year without seniors," she said. "I have so many first-years I took under my wing last years because I could not imagine what it would be like to be a 17, 18 year-old coming into this institution. … It's to the point where you should pay me for all I do."

In addition to a lack of substantive support beyond "quick fixes" from the administration, Aya said that the the Core Curriculum further silences students of color by requiring students to read texts that ignore the existence of marginalized people and their histories.

"It's traumatizing to sit in Core classes," Aya said. "We are looking at history through the lens of these powerful, white men. I have no power or agency as a black woman, so where do I fit in?"

Aya mentioned that even in her most recent Art Humanities class, the word "primitive" was used five times to describe Congolese art—a label she did not speak up against because she was tired of already having worked that day to address so many other instances of racism and discrimination, she said.

Director of the Center for the Core Curriculum Roosevelt Montás said that just as recent years have seen student activism on sexual assault result in policy changes, activists' attention to race—including its role in the Core—is awakening a movement to call for institutional change on this issue.

"You cannot grow up in a society without assimilating racist views," he said. "Part of what is exciting about this conversation is that it's issuing accountability for us to look within ourselves and try to understand the way that racism shapes how we see the world and our institutions."

In a previous interview with Spectator, Montás expressed his view that the Core is always going to be a place where students discover and confront ideas they disagree with, or even find offensive.

While Executive Vice President for University Life Suzanne Goldberg opened the second portion of the event—a student speak-out—by urging students to connect digitally with her office, David Alexander, CC '16, said that students were ready to discuss these issues now.

Goldberg added that in addition to meeting with students, the Office of University Life is convening a task force of students, administrators and faculty to further explore issues of diversity on campus.

"The people who need to be part of these conversations, who are really grappling with these issues are not in the room," Sturm said.

For Montás, there is no easy solution to negotiating the tension between protecting and promoting students' speech. But he stressed the importance of engaging in open conversation.

"There's an idea floating around that people want safe spaces because they want to be protected from view they find objectionable and that is an offensive distortion," Montás said. "Respectful dialogue that acknowledges dignity and the rights of others is the bread and butter of our community."

Goldberg was hopeful that the panel would inspire students to think about what role they can play in an ongoing discussion of race.

"Universities are incredibly challenging places," Goldberg said. "They invite us to imagine the possible. They challenge us and and invite us in a space to think about what could our world look like."

Correction: A previous version of this article inaccurately identified Nissy Aya as an audience member. Aya was in fact a panelist at the event. Spectator regrets the error.