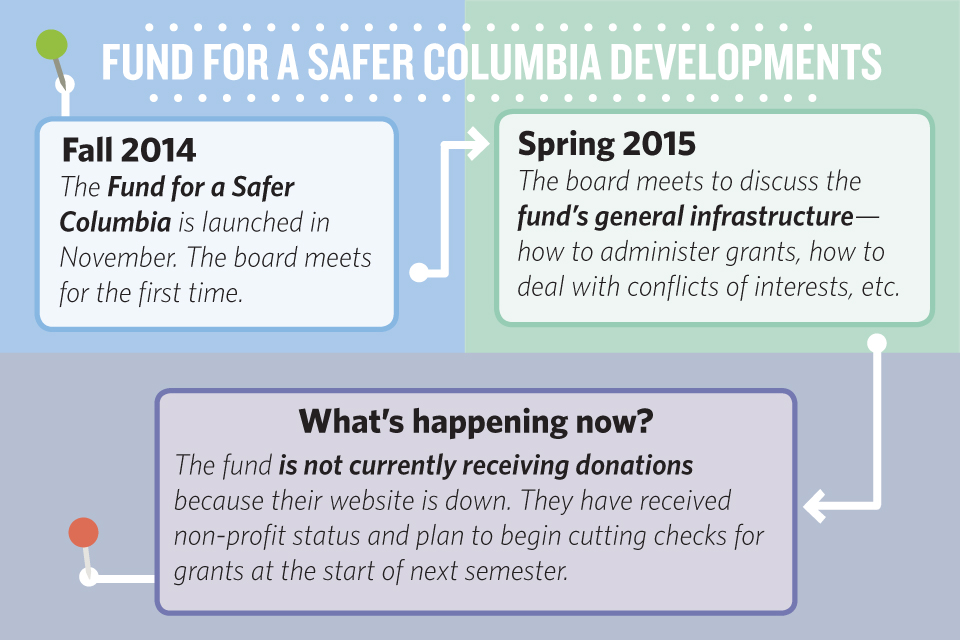 The Fund for a Safer Columbia—a nonprofit organization created by alumni to support students' work against sexual violence—began collecting money last November, but has not administered grants and will not do so until next semester due to administrative challenges, its organizers said.

Zoe Ridolfi-Starr, CC '15, and Marybeth Seitz-Brown, CC '14, launched the fund last November in order to fund student initiatives on consent education, advocacy, and direct support for students who have experienced sexual violence, as well as to sustain activism once media coverage died down. Organizers had heralded the organization as a way to ensure the financial future of the anti-sexual assault movement.

However, a year after announcing the fund, Ridolfi-Starr said the fund, which collected a total of $3,720 in donations as of Nov. 23, is not yet operational and is currently not equipped to receive additional donations. The organizers said they did not expect to face legal obstacles like gaining IRS approval to administer grants.

"There are so many entities involved, some of which are massive government bureaucracies," Ridolfi-Starr said. "The turnaround is a lot slower than we anticipated, which has been a real learning experience for us. We're new to nonprofit management."

The team has also encountered technical difficulties as their website is currently down*, and Ridolfi-Starr said she has been unable to contact the individual commissioned to build the fund's website.

Ridolfi-Starr added that they received a few requests for grants from student groups, yet were unable to provide resources due to the timing of the proposals.

"We've communicated that to the applicants, and those of them that are still interested will still be up for consideration," she said.

Supported by Columbia Alumni Allied Against Sexual Assault, the fund proposed an alternative donation route for alumni who were dissatisfied with Columbia's handling of sexual assault.

CAAASA organizer Andrea García-Vargas, CC '13, who also serves on the fund's board of directors, said she chose to support the fund because it promised to support students directly.

"I personally never really knew to what extent I could trust donating my money to Columbia and not really knowing what happened to it, but with the fund I know who is behind it," García-Vargas, a former editorial page editor for Spectator, said. "That's a direct resource that eventually goes back to the student population."

While a board of directors composed of students, faculty, and alumni is responsible for reviewing applications of funds and allocating resources, it has not convened since the spring because the fund cannot yet legally administer grants.

CAAASA member Hannah D'Apice, CC '12 and a former design editor for Spectator, said that she signed on to the fund board for two terms and has not yet received updates since the board's last meeting in the spring.

"We were given the understanding that we would have quarterly meetings and so far that's what happened," she said. "After then is when I assumed whatever those back-end issues are."

Still, D'Apice said that she is not concerned with these administrative issues.

"I trust Marybeth and Zoe," D'Apice said. "I completely trust that the money that I and other alumni donated will make it into the hands of students."

"There are always going to be hiccups with these sorts of things," García-Vargas said. "Some of the alums with full-time jobs [are] trying to use unpaid labor and unpaid resources to make this stuff happen and battle administrative hiccups."

During the board's last meeting in the spring, members discussed infrastructural details including how to allocate funds, divide the duties of reviewing proposals, and sort out conflicts of interests regarding alumni who had been involved in student groups.

While Ridolfi-Starr said the fund is driven by the partnership between students, alumni, and faculty, two of the three faculty members on the board said they lacked information regarding the initiative and its ongoing activities.

Sociology professor Shamus Khan, the third faculty member to join the board initially, declined to comment. Khan is currently conducting an ethnographic study on sexual health and sexual violence among Columbia undergraduates.

Still, Seitz-Brown said she is optimistic about the impact the fund will have once the team can overcome what they've described as organizational hurdles.

"Once we're fully operational and have that back-end system in place to be able to cut checks … it will be really exciting to connect the alumni, the professors, and the current students in supporting these projects," Seitz-Brown said.

Update 12/2: Ridolfi-Starr told Spectator the website had been fixed the day this article was published.

Fund For A Safer Columbia