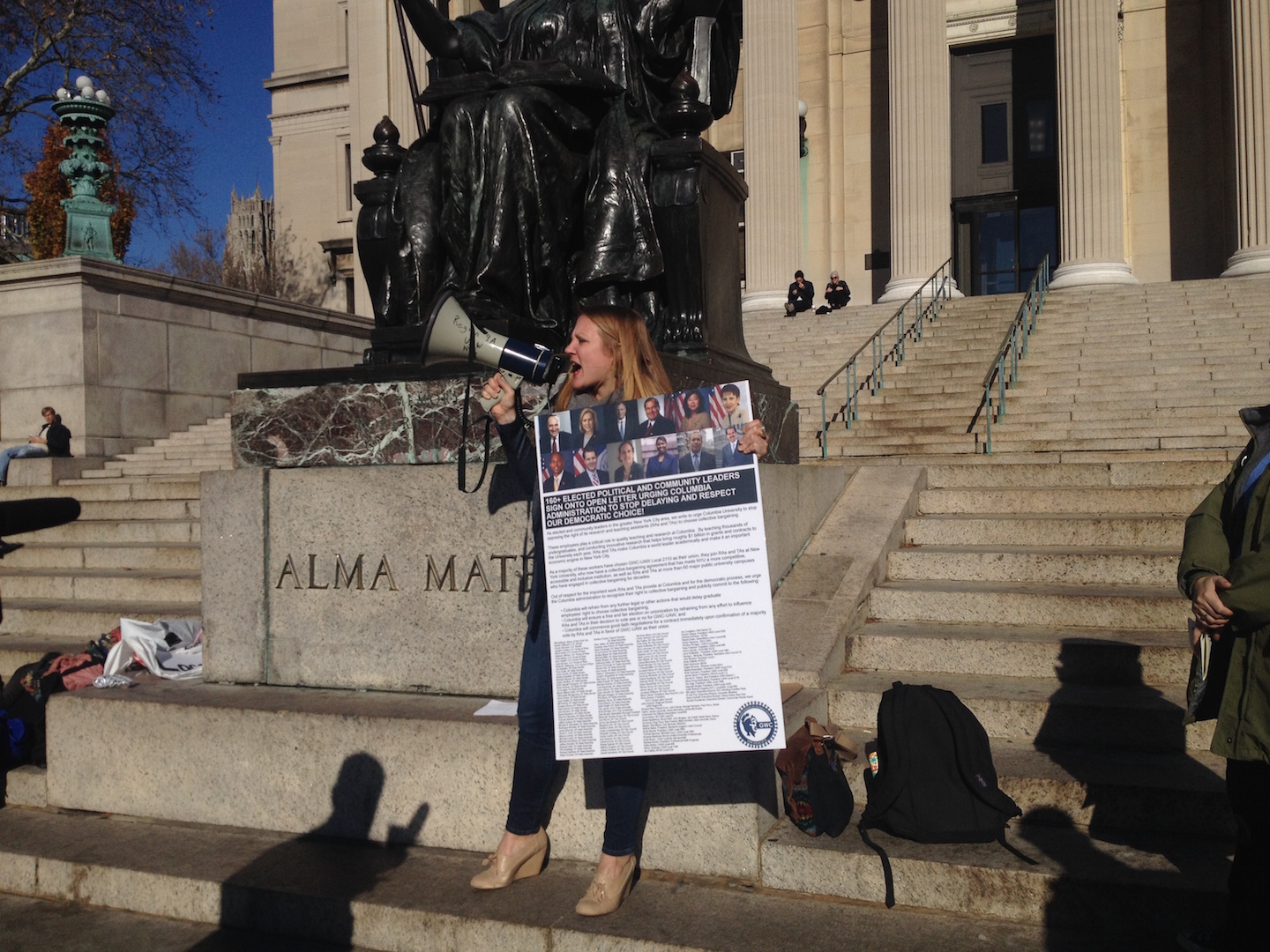 Lindsey Dayton, a student in the Graduate School of Arts and Sciences and an organizer for Graduate Workers of Columbia, holds a copy of the letter.

The Graduate Workers of Columbia-United Auto Workers, a group of graduate teaching and research assistants, have been pushing to gain recognition as a union for one year now, and have taken their petition to unionize to the National Labor Review Board for review.

Following a rally on Low Steps attended by nearly 200 people, including Manhattan Borough President Gale Brewer, New York State Assemblywoman Deborah Glick, New York City Councilmember Mark Levine, and a delegation of half a dozen graduate students tried to enter Low to deliver a letter signed by elected officials including Mayor Bill de Blasio and U.S. Senators Kristen Gillibrand and Chuck Schumer. The letter urges the administration to "refrain from any further legal or other actions that would delay graduate employees' right to choose collective bargaining."

But when the group reached the main doors of Low, they found themselves locked out.

The group then attempted to gain entry to the building through a side door, and was met by Vice President of Public Safetyt Jim McShane and a member of Bollinger's staff.

Maida Rosenstein, the president of UAW Local 2110, asked McShane if the group could enter Low and deliver the letter to Bollinger's office.

"We would like to deliver it to the office especially since the assemblywoman is here from Albany," Maida Rosenstein, the president of UAW Local 2110 said. "I hope you'll communicate to the president that it's a little dismaying to be locked out and have no one even come to the door to find out who we are. We're a peaceful delegation."

In response, McShane told Rosenstein that he would ensure that the letter was delivered to Bollinger.

"We're here, we found out who you are, we're happy to take whatever you have," McShane said. "We'll be sure he gets it."

The University did not respond to requests for comments on the situation.

Glick, the chair of the assembly's committee on higher education, told Spectator that she was shocked by the University's response.

"The president and his staff are so either disrespectful or afraid that they could not allow a delegation into the building, that they had people come out in order to receive a letter that has been signed by 160 elected representatives from the mayor of the city of New York to our New York senators," Glick said. "And now we see a large security contingent arriving because they are so intimidated by their own graduate assistants simply looking for a fair contract."

"What, these guys were called in because of us?" Levine said as two public safety officers filed into Low.