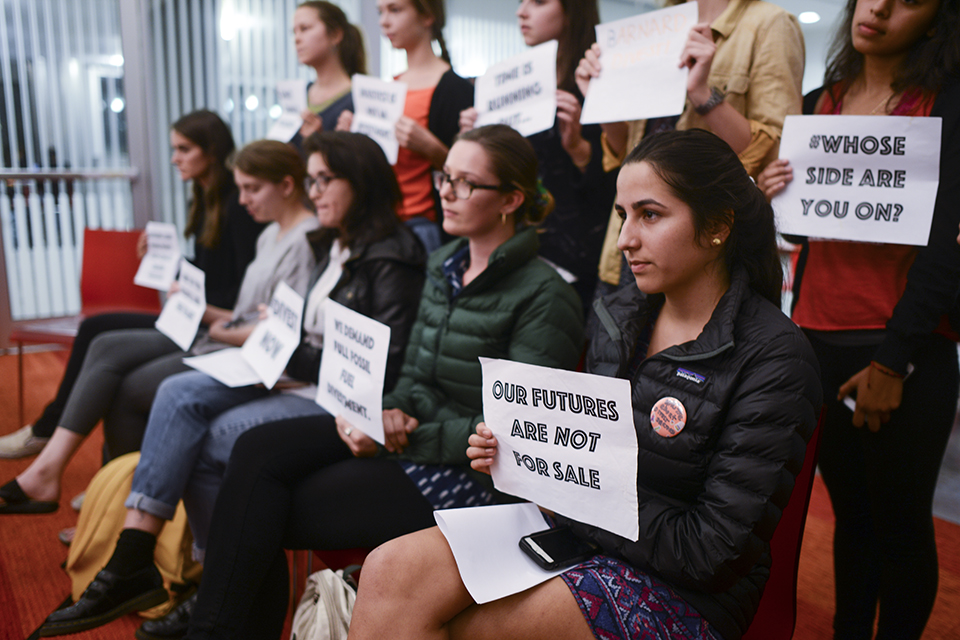 Divest Barnard members at an SGA meeting earlier in November.

Members of Divest Barnard will present a set of suggested next steps regarding fossil fuel divestment to Barnard's Committee on Investments on Tuesday.

This will be the first formal meeting Divest Barnard has with the board of trustees' investment committee, which will ultimately recommend to the full board of trustees whether or not the college should divest from fossil fuels.

The group will suggest that Barnard create a Presidential Task Force to take an in-depth look at the different ways in which Barnard can divest from fossil fuels, immediately freeze all future investments in fossil fuels and private prisons, request that the college receive a breakdown of how much the endowment is invested in specific types of fossil fuels, and create a Committee on Socially Responsible Investments within the board of trustees, according to co-founders of Divest Barnard Evelyn Mayo, BC '18, and Helen Cane, BC '17.

In Divest Barnard's proposed 18-month timeline to divestment, the task force would create an economic analysis report over the course of 12 months, which would then be presented to the Committee on Investments at its meeting at the end of 2016. The information from the report would help inform the Committee on Investments' recommendation to the general board of trustees, which would vote whether or not to commit to fossil fuel divestment in early 2017. 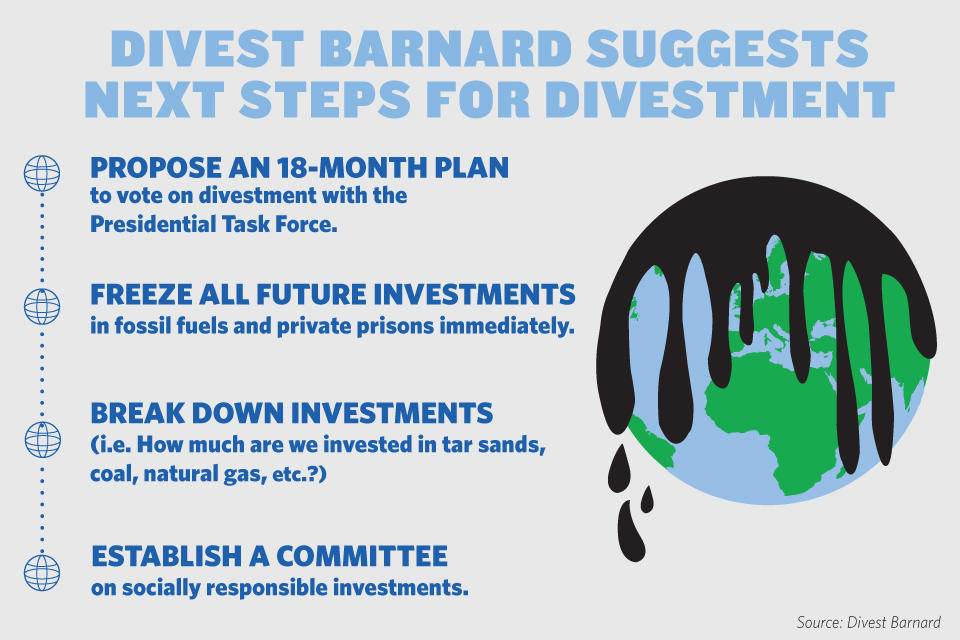 Barnard's endowment is currently invested with 13 other institutions through the investment management company Investure, LLC. But given the nature of the investment model, which pools together the endowments from these institutions into commingled funds which get invested in portfolios, the issue of fossil fuel divestment at Barnard is not that simple.

"There's many different kinds of divestment, so I think this is an issue where the devil really is in the details," Barnard President Debora Spar said in an interview with Spectator last Wednesday. "It's not like there's some wonderful alternative out there that we can pull a switch on tomorrow."

Another complication to the issue is that Barnard only knows the names of which investment managers are in the college's investment portfolio, and not the specific kinds of fossil fuels—such as coal, tar, and natural gas—that are being invested in, according to Spar.

Should the investment committee agree to Divest Barnard's suggested next steps, Cane and Mayo said the Presidential Task Force would be responsible for analyzing the financial implications of each path toward divestment in order to determine the best course of action for Barnard.

"This is our ideal proposal," Cane said. "This is one that we have discussed with President Spar and this is one that we feel is reasonable and timely and doable, but at the end of the day, it's up to the board to follow through or not."

Spar said she believes that the board understands the need for the college to be concerned about the environmental implications of its investments, but that the board has a legal and fiduciary responsibility to ensure that the college's endowment is not adversely affected by divestment.

"The core issue for the investment committee will be, 'What can we do around fossil fuel divestment that does not, in any way, endanger the long term sustainability of the endowment?'" Spar said. "We are constantly having to balance a very long-term crucial goal with an equally crucial, much more immediate goal."

Spar, who has regularly been meeting with Divest Barnard throughout this semester, has been closely advising Divest Barnard in preparation for Tuesday's meeting.

"We met with her, ran by our whole angle, our approach that we're taking to the board meeting, and she gave us really comprehensive feedback on every single one of our points, which is obviously super generous of her to do," Mayo said.

The group will be given 45 minutes to present their argument to the investment committee. But rather than dedicate that time explaining to the committee the financial implications of divesting from fossil fuels, Mayo and Cane said they want to focus on getting the board to commit to taking the necessary steps for fossil fuel divestment.

"Our goal is to get them to make the decision to commit to divestment," Cane said. "Beyond that, it's really their game."

"I think they're [Divest Barnard] doing a great job, they're being very thoughtful in how they're laying out this issue before the board," Spar said. "I think the board is really prepared to take them seriously and is looking forward to having them."

Correction: A previous version of this article stated that Investure CEO Alice Handy would be attending the Committee on Investments meeting. In fact, she was not attending. Spectator regrets the error.