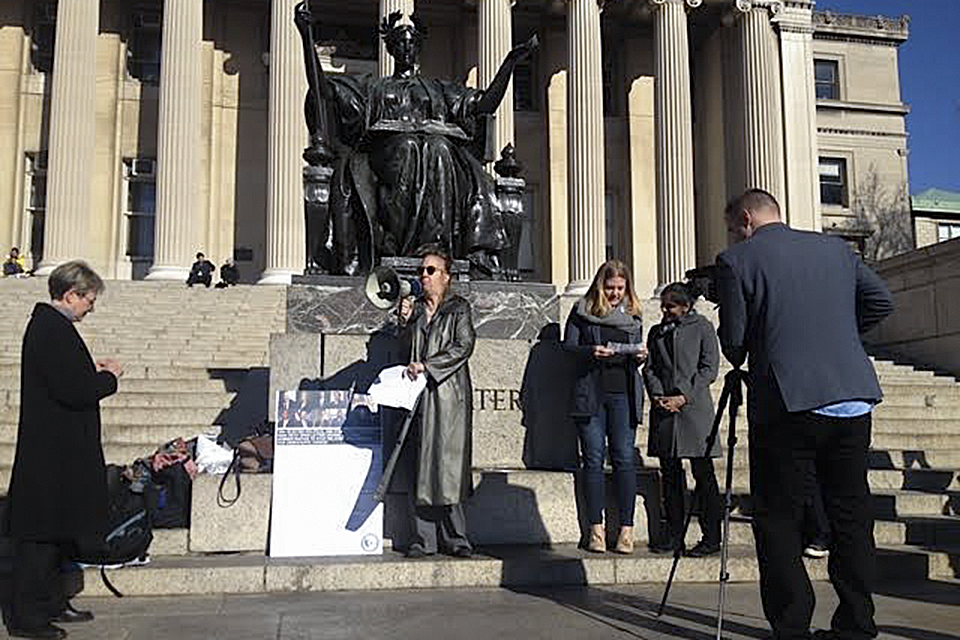 Manhattan Borough President Gale Brewer expressed her support for Columbia graduate students at a rally on Low Steps on Friday.

The Graduate Workers of Columbia-United Auto Workers have been pushing to gain recognition as a union for one year now. The University has refused to recognize them, instead hiring legal representation to argue before the National Labor Review Board that graduate teaching and research assistants are students, not workers.

The caucus, a faction of liberal City Council members, signed a letter urging the University to "stop opposing the right of its research and teaching assistants to choose collective bargaining." It also asks the administration to refrain from any effort to influence RAs or TAs in their decision to vote to unionize and requests that the University "engage in good-faith negotiations immediately" upon a majority vote in favor of unionizing.

Council Speaker Melissa Mark-Viverito, CC '91, and a member of the Progressive Caucus, sent her own letter to University President Bollinger in September urging him to recognize the graduate students' right to unionize.

"My commitment to the principles of equality and fairness can be traced to my years as a student at Columbia, where I saw firsthand the critical role that RAs and TAs have played in helping to make Columbia one of the world's leading universities," the letter said. "By seeking union representation, these employees have a real opportunity to create better working conditions for themselves and better learning conditions for the thousands of students who seek a world-class education at Columbia each year."

Paul Katz, an organizer for GWC, said that the response the group has received has been "overwhelmingly positive."

"It's not hard for us to convince New York's political leadership and figures in the community that we're on the right side here," Katz said. "It's heartening that they have seen very clearly the democratic choice to be made here at Columbia."

The predominantly left-wing City Council—as well as the citywide elected officials—have benefited from strong union support. Many, including Mark-Viverito, James, and Brewer, have received endorsements from UAW.

Brewer, who previously taught urban affairs at Barnard, addressed graduate students at a rally on Friday in support of unionization.

"The work that you do helps this University survive. They could not charge what they do if it wasn't for the work you do," Brewer said. "The community needs to know what's happening here. They assume that their kids are learning from full professors. They need to know that you are a backbone of this University."

After Friday's rally, a delegation of graduate students and elected officials, including New York State Assemblymember Deborah Glick and New York City Council Member Mark Levine, attempted to deliver the letter to University President Lee Bollinger's office. But they were locked out of Low Library and told to leave their letter with James McShane, the vice president of Public Safety.

"The University regrets that circumstances prevented an impromptu meeting with representatives of a group of Columbia graduate students and UAW Local 2110 members who had gathered outside of Low Library for a rally on Dec. 4.," a University spokesperson said in a statement to Spectator. "The group's letter regarding collective bargaining by research and teaching assistants was received and is being reviewed."

Levine, a member of the Progressive Caucus, said that he was "disappointed by the University's initial response," but expressed the hope that the administration would ultimately support the graduate students' efforts to unionize.

"They still have the opportunity to do the right thing by ensuring the democratic rights of their workers to unionize and guaranteeing fairness in the workplace," Levine said.

But in the same statement, the University spokesperson said that "we do not believe that treating graduate students as employees in a one-size-fits-all contract reflects their highly individualized academic experiences and collaboration with faculty mentors."

The statement, for organizers with GWC, was unsurprising.

"The administration has made it pretty clear at this point that they are refusing to engage with us at all," Katz said.  "The bottom line is that we've seen an incredible outpouring of community support that reveals the extent to which the administration has positioned itself on the wrong side here."