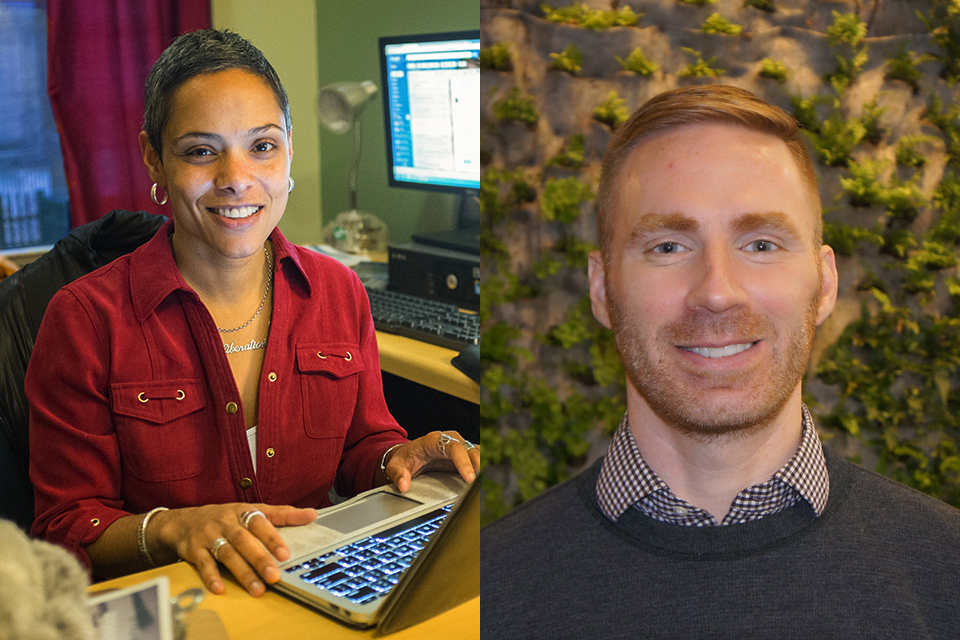 Bing Guan and Courtesy of Columbia College and Columbia Engineering

Two administrators within the Office of Undergraduate Student Life are leaving their positions this month for new roles at Rutgers and Massachusetts Institute of Technology, where they will each continue working with similar student populations to the one they oversaw at Columbia.

Students who worked with Marta Esquilin, the director of Intercultural & Social Justice Programs, and Brad Badgley, the director of Fraternity & Sorority Life, said that their impact on the student body will be missed.

At Rutgers, Esquilin will be serving as associate dean of Honors Living-Learning Community and assistant professor of professional pathways, a newly created position in which she will teach classes while continuing to advise students.

"I get to combine more of the academic side of what I do with the student affairs side," she said, adding that the position will also allow her to be closer to home and her young children.

Within the Office of Multicultural Affairs, Esquilin—whose last day is next Tuesday—has been responsible for overseeing the Intercultural Resource Center, which acts a a safe space and housing option for historically underrepresented students.

Esquilin said that she is proud of the IRC's growth in terms of both housing and services. In her time overseeing the space, it has gone from housing 15 residents to 35 currently, and has provided more space and support for identity-based groups on campus.

"It's grown from just a residential community to a resource center, and I'm proud to say that pretty much every moment of the day, it is bustling and bursting at the seams with people using that space," Esquilin said. "We have so many different identity groups, and that is such a reflection of what I'm about personally."

Esquilin began her involvement at Columbia as a graduate student assistant in the IRC in 2002. She then worked with the Double Discovery Center before spending the last nine years in her current position.

"The IRC has been a home for me personally, which is why I've been here for so long," Esquilin said. "I remember when I first came here thinking how much potential the space had."

Students who live in the IRC said that Esquilin has been a constant source of support and an advocate for the IRC's growth.

"Marta has been 'house mom' for several years and has been a force to reckon with in regards to the project of securing stability and resources for the IRC," Hebah Khan, BC '17, wrote in an email to Spectator. "She has dedicated much of her life to this space, and for that, she should be honored, because without it we wouldn't be where we are today."

In addition to fulfilling her duties as an administrator, Esquilin has also provided personal support for the students she serves.

"I can honestly say there are classes I wouldn't have passed, friendships I wouldn't have salvaged, and hugely unexpected bumps in the road toward graduation that I would not have made it around if it weren't for Marta's door always being open," Asha Rosa, CC '16, wrote in an email to Spectator.

Badgley, who oversaw Greek life on campus before his departure last week, will be taking on an expanded role at MIT as the associate dean of Fraternities, Sororities, and Independent Living Groups.

"It's this bittersweet feeling of being really excited, but that I'm going to miss a lot about the community here," Badgley said. "I just feel very connected to the students, and I think that that is the part for me that has really shined."

In his current role, Badgley said he sought to work to collaborate with other organizations on campus to broaden the perspectives of the Greek population.

"I think that it's really important to be intentional about the relationships that I have," Badgley said. "So, I make sure that I connect with partner offices in whatever way I can."

For example, the Office of Fraternity & Sorority Life has collaborated on consent education programming with Sexual Violence Response and worked to develop the Intergroup Community Building Initiative with Esquilin.

Badgley also said he focused on working with chapters on achieving high results in the Alpha Standards of Excellence. Last year, 21 chapters scored five stars, the highest possible score for this annual rating.

Students who worked closely with Badgley on the Inter-Greek Council have said that he was skilled at balancing his role as an administrator and an advisor.

"One key spot that Brad really took was as a liaison," outgoing IGC Director of Internal Affairs Teddy Finkelstein, CC '17 and a sports columnist for Spectator, said. "I felt like he was advocating for us and was on our side a lot of the time, and not just a vanilla administrator who is all about enforcing policy."

A former health specialist at Alice! Health Promotion, Badgley was also praised for his efforts to create an inclusive and intentional community.

"I will definitely miss Brad's emphasis on slowing down a little bit, and examining your problems from a little bit of a broader perspective," Panhellenic Council President Roberta Barnett, CC '16, said. "Brad always made sure that students were being very thoughtful and intentional with the discussions that they had."