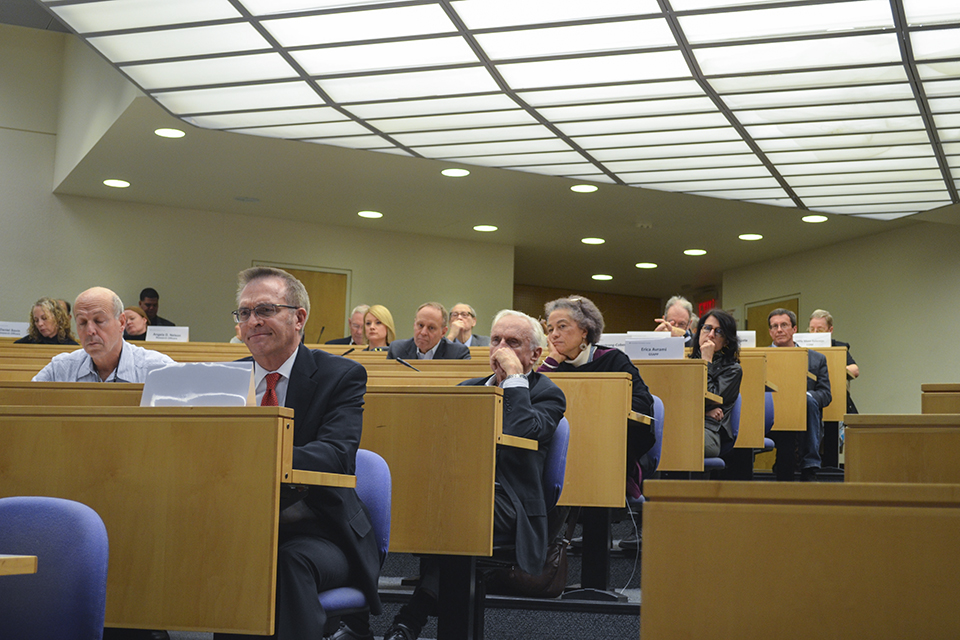 Though the University effectively rejected a proposal created by the University Senate's Faculty Affairs Committee to prohibit internal investigations into anonymous Title IX-related complaints made in course evaluations, fears surrounding the issue persist.

The proposal asks that the University disregard anonymous complaints made on course evaluations and campus publications' comment sections that could compel a Title IX investigation against faculty members. In response to an inquiry made by Spectator, the University released a statement saying they were obliged to respond to any information reporting a hostile environment, as described by Title IX, regardless of whether the source was anonymous.

"When our Title IX Coordinator, the Office of Equal Opportunity and Affirmative Action, or other so-called 'non-confidential' resources at Columbia learn of the possibility of a hostile classroom environment, our legal obligations and the safety of our community dictate a response...The fact such information is conveyed by an anonymous source does not preclude the need for this evaluation," the statement said.

Though the University's statement effectively rejected the proposal for the time being, the fears and concerns surrounding anonymous complaints on course evaluations still remain for both faculty and students.

The proposal stems from the fear that students could anonymously—and perhaps maliciously—make unverified claims that could damage faculty members' careers, and as a result compel faculty to strip their lessons of any controversial material in order to avoid complaints that they created a hostile learning environment.

Professor James Applegate, a member of the Faculty Affairs Committee, described an incident in which a School of Engineering and Applied Science professor was investigated based on anonymous student complaints. Though the professor was later exonerated after providing videos of his lectures, being investigated can be a punishment in itself, Applegate said. If the University community or the faculty's colleagues learn that they were investigated for violating Title IX, their reputation may be irreparably damaged.

Students, on the other hand, have pushed back against such a policy, fearing that it would shut down an avenue that allows students to feel safe reporting incidents perpetrated by those in positions of power. However, the severity of the punishment faculty may have to endure, according to the committee, warrants a mechanism that allows students to report violations confidentially, not anonymously.

"We condemn racist and sexist behaviors, we recognize the University's obligation to take complaints seriously and perform a full investigation, and we understand the need to make clear to students that there are mechanisms in place to allow them to identify such inappropriate behaviors, both anonymously and formally," the Faculty Affairs Committee co-chairs said in their April statement. "However, course evaluations should not be the occasion for such complaints."

Though faculty have previously voiced these concerns, the announcement that course evaluations will now be made public has heightened urgency around the issue.

Applegate expressed concern that fear of an investigation could cause instructors, afraid of being accused of creating a hostile learning environment, to shy away from discussing contentious subjects in class.

He explained that a discussion about affirmative action could understandably cause students of color to feel their place in the classroom was being questioned. The discussion, Applegate said, is an example of a situation in which a professor could fear triggering an anonymous complaint.

"If you self-censor to the degree that I think these situations will do, you end up with a sort of environment in which college students are considered incapable of discussing issues in the classroom," Applegate said.

Applegate further explained that junior faculty members could feel greater pressures to self-censor in an attempt to protect themselves from anonymous allegations. In particular, this could pose an issue in discussion-based Core Curriculum classes, as a large percent are taught by untenured faculty members.

"Jim Applegate will survive that because I have tenure, and I also have a thick skin," Applegate said. "An assistant professor is probably untenurable and certainly unhirable at other places given that this stuff will live forever on the Internet."

Even so, it has yet to be decided if complaints or allegations against professors would be presented to the public on open course evaluations.

"We are in the process of establishing a set of policies that would determine when inappropriate student comments would be removed from Vergil ," Chair of the Educational Planning and Policy Committee Brent Stockwell said in a statement to Spectator. "If either students or faculty make inappropriate or uncivil comments in class or on course evaluations, our entire community suffers. Therefore, we are closely examining what can be done to minimize the number of such situations, consistent with ensuring that no student encounters a hostile learning environment."

According to Peter Lake, director of the Center for Excellence in Higher Education Law and Policy at Stetson University College of Law, while a pattern of reports may necessitate an investigation, a single complaint may not.

"The good news, I suppose, is the Title IX [coordinator] is told they do not necessarily have to act on anonymous reports unless they see a pattern of some kind," Lake said. "A single report of something might not be enough to trigger any kind of inquiry."

However, Daniela Nanau, a civil rights attorney, told Spectator that schools have an obligation to inquire about all complaints, regardless of whether their source is anonymous.

"Based on my understanding of Title IX and, in particular, a letter that was sent out to colleges and universities in 2011 from the US Department of Education, is that schools are obliged to respond to complaints about sexual assault and sexual harassment, and there isn't a 'get-out-of-jail-free-card' if the complaints are anonymous," Nanau said.

Nanau also said that a sweeping policy could prevent schools from investigating anonymous complaints lodged against instructors who already have a history of harassment.

"I would say a school that adopts a blanket prohibition on anonymous complaints might not be well served in the end, because I think that the Title IX really requires schools looking at each complaint, whether they're anonymous or not, on a case-by-case basis and responding appropriately," Nanau said. "I would not want to be the school administrator who turned a blind eye to that kind of a complaint. I think you're setting yourself up for a lawsuit later on."

However, for Applegate, the University's decision to take a stance that effectively rejects the committee's proposal is driven by a broad interpretation of Title IX in order to protect itself.

"It's my strong suspicion, based on having been here for a very long time, that this problem is caused because the Office of General Counsel interpreted Title IX as expansively as they possibly could've and said, 'This is what you can do to possibly cover yourself in all conceivable circumstances,'" Applegate said.

Regardless of whether or not a school is legally able to make a policy disallowing any anonymous complaints from compelling a Title IX investigation, doing so could leave them more liable to a lawsuit should it be found that one of those complaints detailed a truly unsafe experience of which the school had knowledge, but did not investigate.

According to Katie Shipp, a Title IX expert and associate at Marsh Law Firm PLLC, as public scrutiny of universities' compliance with Title IX is increasing, schools are focusing on doing their best to protect themselves.

"I think schools are being really careful right now A lot of people are looking at them and looking at what they're doing," Shipp said. "I think they're going to be more cautious, and the regulations are pretty clear that if they're put on notice of sexual violence or discrimination or harassment or retaliation, then they have to investigate."

During the plenary, University President Lee Bollinger demonstrated this caution, questioning the legality of the Faculty Affairs Committee's proposal.

"The first question I would want analysis of, without taking any position myself on it now, is what are the federal requirements with respect to complaints?" Bollinger asked. "Would we then be vulnerable to a federal restriction that would say, 'If you fail to recognize a claim of hostile environment because you have foreclosed a method of becoming aware of it, that is something the law does not permit you to do?'"

In addition to the question of the legality of the committee's proposal, students expressed concern that, should the proposal be approved, a useful avenue for expressing concerns would be closed.

Abby Porter, CC '17 and a member of the Coalition Against Sexual Violence, feared that creating a policy cutting off anonymous complaints exacerbate the feeling that students complaints' aren't taken seriously and worsen the common myth that false reports make up a significant part of sexual violence or harassment claims.

Nels Lindquist, CC '18, said that while anonymous comments give students the ability to make claims without constraint, it is also important to keep all outlets open for students to voice complaints.

"On the one hand, it kind of creates an environment where it becomes very easy to point fingers because you might not be held accountable, and I assume that's why people do it anonymously," Lindquist said. "On the other hand, it's kind of a paradox because I do support the right of individuals to use any avenue necessary to kind of voice their opinion if they feel like they're being harassed."

University Senator Sean Ryan, CC '17, said that, although the University has an obligation to investigate any complaints they receive, students also have a number of ways to report their concerns outside of course evaluations.