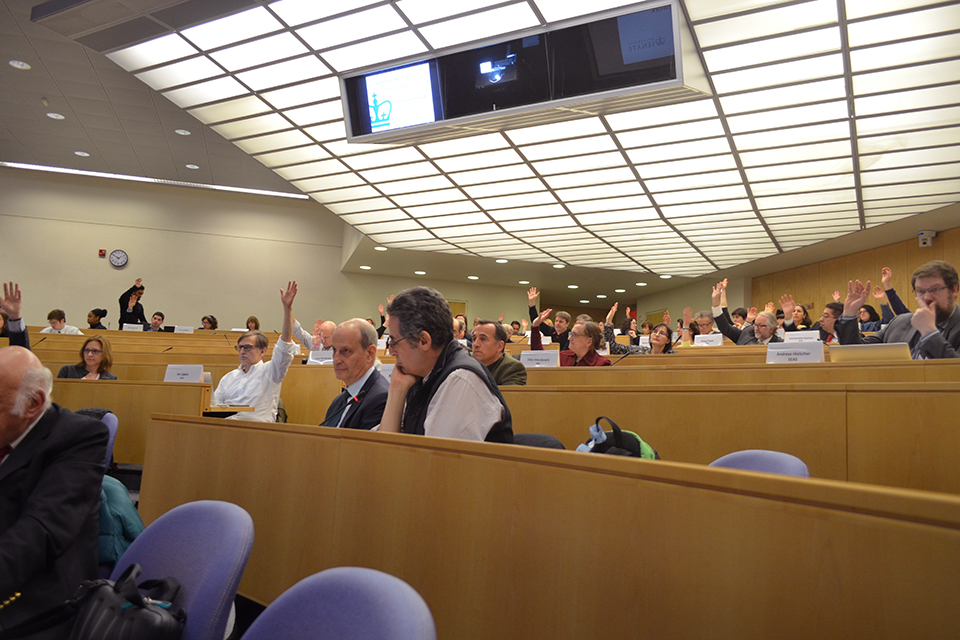 The University Senate plenary met last Friday to discuss the creation of The Institute for Ideas and Imagination.

The University Senate plenary met last Friday to discuss the creation of a new Paris-based research facility, a proposal to strengthen the positions of non-tenure track faculty, and the Native American Council's efforts to create a plaque commemorating the Lenni Lenape.

University President Lee Bollinger also commended the response of members of the Columbia community to the recent tragedy in Honduras at the plenary, applauding volunteers who immediately traveled to Honduras to offer aid.

The Institute for Ideas and Imagination

The University Senate unanimously approved a proposal to create a Paris-based research and collaboration facility called the "Institute for Ideas and Imagination."

The institute, run by the Columbia global center at Reid Hall, would send seven postdoctoral students and junior faculty for a one-year resident fellowship to Paris to collaborate with a group of seven academics, researchers, and artists from around the world.

Mark Mazower, chair of the Faculty Steering Committee for Columbia's global center in Paris and a professor of history, said that the motivation behind the creation of the institute is to combat "a certain kind of intellectual inertia."

"We think it's important for many reasons to support, as far as we can, those people who are at an early stage in their careers," Mazower said at the Senate meeting. "Because frankly, from my own experience, they're often the people who have the most interesting and the newest ideas."

Mazower said the institute will add to the growing number of initiatives centered around faculty at Columbia's global centers, but did not address how the University would fill the positions left vacant on the Morningside campus by the departure of the fellows and their supervising faculty—an issue currently plaguing many of Columbia's global initiatives and study abroad programs.

Furthermore, Mazower said the institute would help Columbia extend its global reach, as well as improve the global education here at the University.

"We try to challenge ourselves and shake up the curriculum so that it makes us more responsive to our changing place in the world, and we see this institute as an integral part of that process," Mazower said.

The senate also unanimously passed a proposal with a recommendation to the Office of the Provost to attract and retain the positions of non-tenure track faculty.

This proposal is meant to lengthen the one-year non-renewal notice given to non-tenured members of the faculty by six months for those with seven to 11 years in their position, and by a full year for those who have held the position for 12 years or more.

In 2014, non-tenure track faculty composed 26 percent of total faculty on the Morningside campus and 75 percent of faculty at Columbia University Medical Center, according to the proposal.

"When you begin to look at people who have spent half of their professional career in this institution and made a significant commitment to it, I find it somewhat disappointing that the institution doesn't give them a slightly more generous commitment, a little bit more time of notice," Letty Moss-Salentijn, co-chair of the Faculty Affairs Committee, said.  "This particular proposal, this resolution, tries to address this."

The proposal does not expand its protections to CUMC faculty, who only receive six months notice.

While the question of whether this extension was in keeping with Columbia's peer institutions was raised, it was dismissed by Senator and associate professor of environmental health sciences Greg Freyer, who deemed it inconsequential to the question of showing respect to non-tenure track faculty.

"This is the beginning of a conversation, and I think it's an important conversation to have," Provost John Coatsworth said.

The Student Affairs Committee of the senate announced their endorsement of the Native American Council's effort to create a plaque commemorating the Lenni Lenape, the original inhabitants of the island of Manhattan.

The Native American Council has been attempting for several years to fund and gain trustee approval for the plaque.

"The fact that this campus has so many effigies dedicated to colonial figures and early United States figures, it's really demeaning," Elan Pochedley, CC '16 and NAC co-president, told Spectator in October. "What it boils down to is the fact that this is operating as a form of historical erasure, the fact that there's not a plaque already recognizing this as Lenni Lenape territory."

The endorsement by the Student Affairs Committee represents a step forward in the approval process.

"In order to appreciate all aspects of our University's history, the installation of this plaque and the acknowledgement of these peoples is absolutely necessary," the Student Affairs Committee said in a statement released after Friday's plenary.