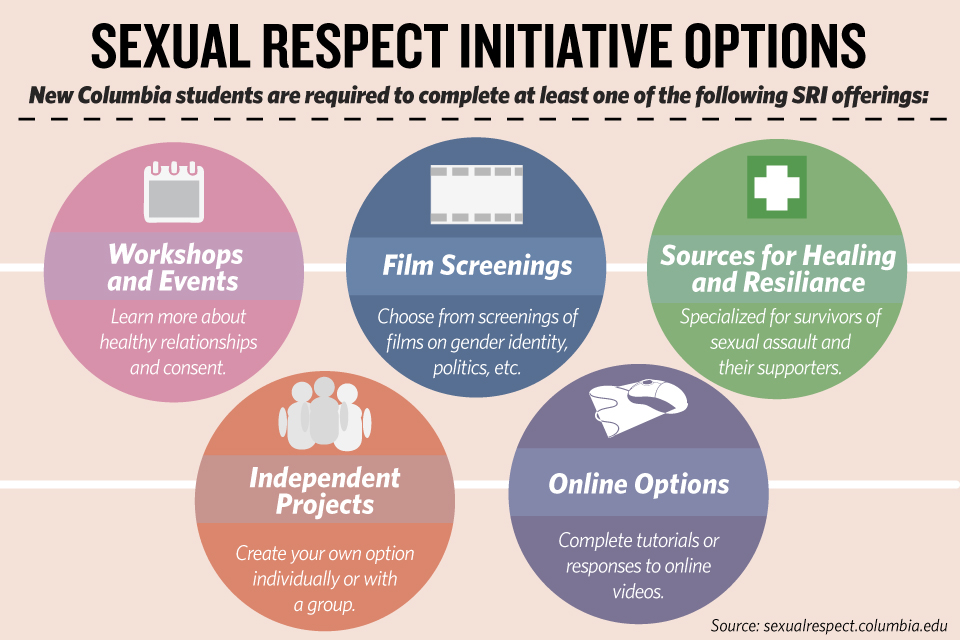 Despite Columbia's commitment to continuing sexual respect education with the 2016 Sexual Respect and Community Citizenship Initiative, students are reporting apathy toward programming, indicating a broader unwillingness to engage in conversations surrounding these issues.

The Office of University Life, which launched Columbia's second iteration of the SRI—a sexual respect education program required for all new students—on Oct. 20, had promised more workshop options and an extended deadline, after last year's initiative came under fire from students who criticized its rocky implementation and questioned the efficacy of programs like the Arts Option.

Despite these improvements, many students said they are postponing the requirement until closer to the March 20 deadline and have demonstrated disinterest in participating.

Students' unwillingness to engage with issues of sexual respect has further been underlined as sexual assault activist groups on campus have struggled to resume their advocacy work following the graduation of key members of the movement.

But the issue of sexual assault at Columbia is still a critical issue—a survey conducted and released five months ago by the Association of American Universities found troublingly low rates of bystander intervention by witnesses of sexually violent acts at Columbia, and confirmed that one in four undergraduate women report being sexually assaulted during their time at the University.

"On this issue, like on any issue, interest ebbs and flows," Goldberg said. "The responsibility of a University to a student body is to stay engaged with these important issues whether they are in the spotlight or not because they deeply affect our community, as the AAU survey showed."

But as students show reluctance to participate in conversations about sexual respect, confusion surrounding the requirement has also emerged—the 2016 SRI is only required for new students, but upperclassmen interviewed at SRI workshops reported attending the events because they thought they were required.

Diego Anell, CC '17, and Gregory Swong, CC '17, said they only attended a Jan. 28 Sexual Violence Response workshop called "Status Updates, Snapchats, & Text Wars: Navigating Networked Relationships" after an "ambiguous" email from the Office of University Life seemed to imply that they were required to complete the initiative.

"If I knew I didn't have to be here, I probably wouldn't have come," Swong said. "It spreads like wildfire. One person thinks they have to do it, and then every junior is signing up."

Other students interviewed by Spectator indicated the same response to the email, which was sent out on Jan. 25.

"I actually messaged a couple people asking if it was going to be a yearly thing now, and they said it looks like that's the case," Claire Chen, CC '17, said. "People have basically assumed that it is required, but no one's clear what the case is."

Since sending out the email in January, the Office of University Life added a registration reminder to Student Services Online. Executive Vice President of University Life Suzanne Goldberg also noted in an interview with Spectator that several notifications informing students that only new students must complete the initiative are listed on the Office's blog.

Students interviewed who were required to complete the initiative said they chose the option that seemed to require the least amount of engagement.

Kritzia Ley, CC '19, said she watched an online video for the requirement because it seemed like the easiest and fastest option.

"I think I'm the only one of my friends who has done it," Ley said. "I think people are putting it off because, right now it just feels like another responsibility, another test, another thing we have to do."

Gabriella FitzGerald, CC '19, said she still has not signed up for the SRI and that while she thinks it is important to educate students on sexual respect, the requirement feels like a task.

"The whole requirement thing makes people not that interested in it and it becomes something you just have to complete," FitzGerald said. "People say, 'Oh I have to do this, I need to get it done.'"

Goldberg said that the University can only do so much to foster participation among students.

"People wouldn't go to class if they didn't feel they had to go," Goldberg said. "It's in the nature of doing things at a University where something reflects values. Some of those activities will have to be required to be accomplished broadly and in a meaningful way across the student body."

Abby Porter, CC '17, and a member of the Coalition Against Sexual Violence who originally advocated for a SRI to be required of all students, said that she understands that not all students will voluntarily complete the SRI.

"It makes students resentful when they feel that they have to complete it and they are not engaged," Porter said. "I would love if every student would participate in one of these workshops. I know that's not going to happen for everyone, and it is going to be fairly self-selecting."

Still, Goldberg said that the students who have attended workshops led by trained facilitators have provided enthusiastic reviews. Aside from bringing back a popular workshop from last year, "The Art and Science of Flirting," SVR has developed more options, such as an advice session with MTV's Francisco Ramirez and a workshop that utilizes an episode of "Friends" to engage students in education about sexual respect.

While Goldberg said the office was not yet able to provide data regarding which students have completed the SRI, she noted that the majority of participants have been new students. Students confirm their enrollment in CourseWorks, and Goldberg said that each workshop has seen attendance in the double digits.

Ultimately, Goldberg said that it is important to require students to complete the SRI not just because they wouldn't do it otherwise, but also because it indicates the importance of these values to Columbia.

"In the U.S., voter turnout is very low compared to countries where it is required," Goldberg said. "In our view, having students participate, engage on these issues, and understand deeply the shared responsibility of community members is very important."

Correction, Feb. 10: A previous version of this article misspelled the last name of Diego Anell, CC '17.