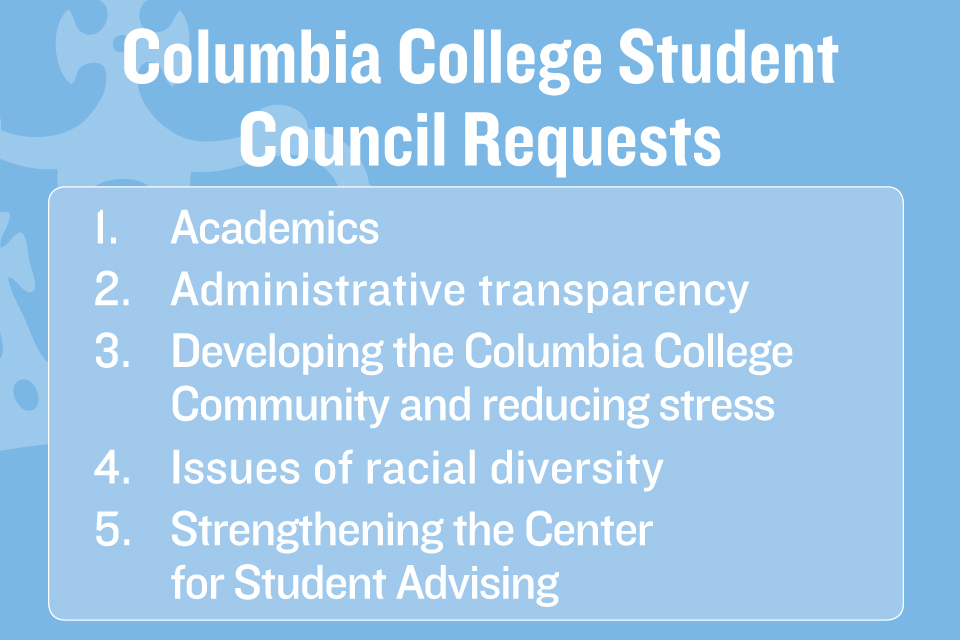 The council's recommendation of these five problem areas, which were voted on at the council's general body meeting on Sunday, comes after a recommendation from Valentini that CCSC present to him the five most important issues facing Columbia College students.

In response to Valentini's request, CCSC President Ben Makansi, CC '16, sent out a Columbia College-wide survey twice in December to assess what students felt were the most critical issues, while University Senator Sean Ryan, CC '17, spearheaded a committee to flesh out the issues into concrete one-page proposals, which have been shared with Spectator.

The committee originally drafted proposals for eight issues found to be most critical, which included housing and facilities, strengthening Columbia Medical Services, and financial aid, but ultimately narrowed down the list to five that they deemed most critical for Valentini's attention.

Academics: Academic Affairs Representative Nicole Allicock, CC '18, proposed that double-major students be allowed to double-count courses, that students be allowed to take two semesters of their Global Core and science requirements for Pass/D/Fail credit, and that academic deans acknowledge aspects of Columbia's culture that are "stress-perpetuating" by clarifying academic expectations to students.

Administrative transparency: Class of 2019 President Josh Schenk, CC '19, summarized the committee's requests for monthly email updates and a reformed Columbia College website, which would explain to students decisions being made by Valentini's office. Schenk stated in the proposal that this would "help improve student-administrator relations and collaboration." Schenk's proposal also requested weekly, informal opportunities—such as meals or coffee chats—to meet with administrators such as Valentini, and infographics to explain the University's administrative structure to students. The proposal also suggested that Columbia College administrators could "efficiently inform students of Columbia College developments and decision-making" by writing regular columns in Spectator.

Developing the Columbia College community and reducing stress: The proposal drawn up by Vice President of Campus Life Kelly Echavarria, CC '16, Class of 2018 Representative Nathan Rosin, CC '18, Class of 2019 Representative Adam Resheff, CC '19, and Ryan advocated for administrators to sponsor, attend, and engage in campus events and suggested  the creation of a programming board to "strengthen relationships between students and administrators, and increase administrator visibility."

Echavarria, Rosin, Resheff, and Ryan also asked that the Office of Undergraduate Student Life help students become more involved in the New York City community and stated that security and setup costs for student group events have become "a drain on budgets," an issue also raised by the Engineering Student Council at a meeting in January.

The University has led its peers in hiring faculty members of color—the central administration allocated $15 million in 2005 and $30 million in 2012 to support more hires from minority backgrounds. Last year, Columbia reaffirmed those efforts when University President Lee Bollinger announced an additional $33 million would be spent bolstering the initiative.

Strengthening the Center for Student Advising: Class of 2018 Vice President Lani Allen, CC '18, suggested that student-faculty relationships should be improved, given complaints from both students and CCSC members that a lack of faculty advising limits relationships between students and faculty. Allen lobbied for both faculty and academic advisers to be assigned to students in a system similar to that of Yale University—which pairs first-years with both faculty and academic advisers—and also expressed concern about the frequent turnover of CSA staff that has forced students, especially upperclassmen, to be reassigned to other advisers.

Though Makansi, Ryan, and Vice President for Policy Vivek Ramakrishnan, CC '16, will only present these five topics to Valentini, Ryan said he still expects that CCSC will take action on the issues that did not make the final cut.

"These proposals express some very important issues," Ryan said in an interview with Spectator. "The idea was that they could be best routed to other people. Our next step forward is figuring out who to send those to, and how to present them, and I think that will be something that happens in our CCSC policy meetings over the next few weeks."

CCSC had previously acknowledged that some issues important to students were not part of the committee's final proposals. During the revision process, Ryan announced that the committee chose to remove sexual assault from the list of topics under discussion because the issue deserved special attention outside of the five issues that would be presented to Valentini.

Ryan said he is hopeful that presenting these five issues to Valentini will lead to concrete action.

"We're putting a lot of trust in Dean Valentini's office, since this is something that he asked for and we've spent a lot of time and hard work to get these together," Ryan said.