SRI incompletion, but not gender-based misconduct offense, results in ban from leadership roles

SRI incompletion, but not gender-based misconduct offense, results in ban from leadership roles 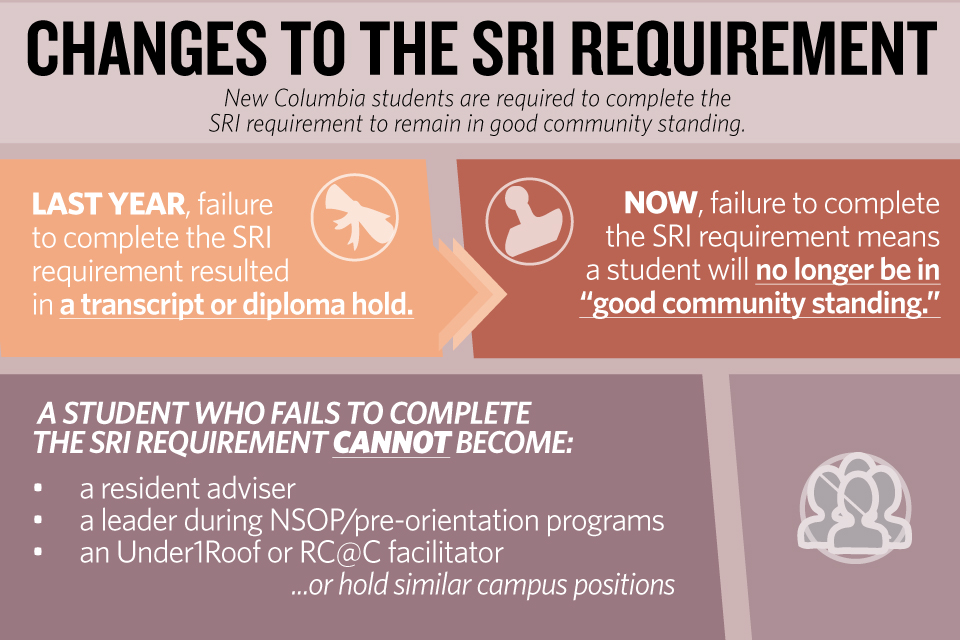 A new policy announced by Columbia College and the School of Engineering and Applied Sciences creates a blanket restriction prohibiting students who do not complete this year's Sexual Respect and Community Citizenship Initiative from holding certain leadership positions, while no such blanket policy exists to prevent students who have been found responsible for gender-based misconduct from serving in those same roles.

Last year, failure to complete the SRI resulted in diploma and registration holds, a policy that the deans of "nearly all other schools" this year have continued to impose, according to Executive Vice President of University Life Suzanne Goldberg.

However, this year, Columbia College and SEAS changed their policy to create a blanket prohibition that strips students of their "in good community standing" status if they fail to complete the SRI. Only students new to the University this year are required to complete the initiative.

Students not in good community standing are barred from serving as residential advisers, coordinators, leaders for New Student Orientation Program and pre-orientation programs, and facilitators with Under1Roof and Responsible Community at Columbia for a full academic year until they complete the SRI.

After a Spectator investigation discovered that a blanket policy barring students found responsible of gender-based misconduct from serving in positions of power on campus did not exist, Residential Life amended its policy to prohibit sexual misconduct violators from serving as resident advisers. However, the University did not apply the blanket policy to teaching assistant or orientation leader positions.

According to a Columbia College spokesperson, the new policy was set by Dean of Undergraduate Student Life Cristen Kromm in consultation with Columbia College Dean James Valentini and SEAS Dean Mary Boyce. None of the deans could immediately be reached for comment.

Students interviewed said that the discrepancy between the two policies—the notion that students found responsible for gender-based misconduct can serve as OLs, but students who failed to complete the SRI can not—is troubling.

"That seems pretty unfair," Jake Drobner, CC '17, said. "I think that the SRI is a great thing, but the implementation of it is wrong, and this is a great example of the way in which it seems to be very hypocritical, if not mistargeted."

Sarah Durham, CC '16 and a columnist for Spectator, said the lack of a blanket policy pertaining to students found responsible for gender-based misconduct seems "incongruous."

"Your gut feeling is that you should not be able to be an OL," Durham said of students found guilty of sexual misconduct.

Applications for both NSOP and International Student Orientation Program leadership positions require students to consent to providing a transcript of their disciplinary history. Any violations of Columbia's Gender-Based Misconduct Policy are found on the transcripts, in compliance with the New York State Law Enough is Enough.

Alexander Tin, CC '17, who has served as both an NSOP and ISOP leader, said that the application process is highly selective and that he thinks it is unlikely that a student with a recorded violation would be chosen as an OL.

"It's a little weird that they messaged it like that but even much smaller things can prevent you from becoming an NSOP leader," Tin said.

Nevertheless, the lack of a stated blanket policy still allows for the possibility that a student found responsible of gender-based misconduct could assume a leadership position. In one instance last year, Spectator reported on a student who was found responsible for sexual assault and allowed to be a TA.

Tin emphasized the closeness of OLs' relationships with new students, and said it is important that students found responsible of gender-based misconduct not be selected for the position.

"You're in many ways a mentor that they have to look up to, and you're also helping them adjust to living in the city and on campus," Tin said. "I think it's very important that we choose people who haven't done any of the things listed under the sexual misconduct policy."

Coalition Against Sexual Violence Coordinator Abby Porter, CC '17, said she sees a discrepancy between the University's application of blanket restrictions on some but not all leadership positions.

"It's great that they're recognizing that these positions have power and influence over those who they are leading," Porter said. "Whether you're an OL or a CUE leader or an RA, there is power in your position ... it [the blanket policy] should be something that's applying to all kinds of positions that students hold on campus."

Students also raised the concern that the shift in punishment from diploma holds to leadership restrictions will decrease the incentive to complete the SRI for a critical number of students—those disinterested in serving in NSOP leadership roles.

Porter said that the University's willingness to apply a blanket policy to students who do not complete the SRI but not to those found responsible of gender-based misconduct reflects a larger trend in the University's message about the importance of sexual respect.

"It devalues their previously expressed commitment to combating sexual violence and rape culture on campus," she said.

Porter also criticized the shift to a less severe punishment for students who fail to complete the initiative.

"It's a very limited pool of people who this is actually mandatory for, like only those who want to apply for these positions. If you're going to make things mandatory on our campus like the swim test, then sexual violence education and prevention education should be also mandatory."

Isabelle Wilkinson, CC '19, said that she was not aware of the consequences of failing to complete the SRI but believes students will feel less incentivized.

"I know that a lot of people aren't going to do it now because they don't really want to be orientation leaders," Wilkinson said.

Aside from the potential of the new policy to discourage students from completing the SRI, Drobner said its discrepancy with existing University policies is disconcerting and deserves greater attention.

"I don't think it's intentional," Drobner said. "But it should definitely be fixed."