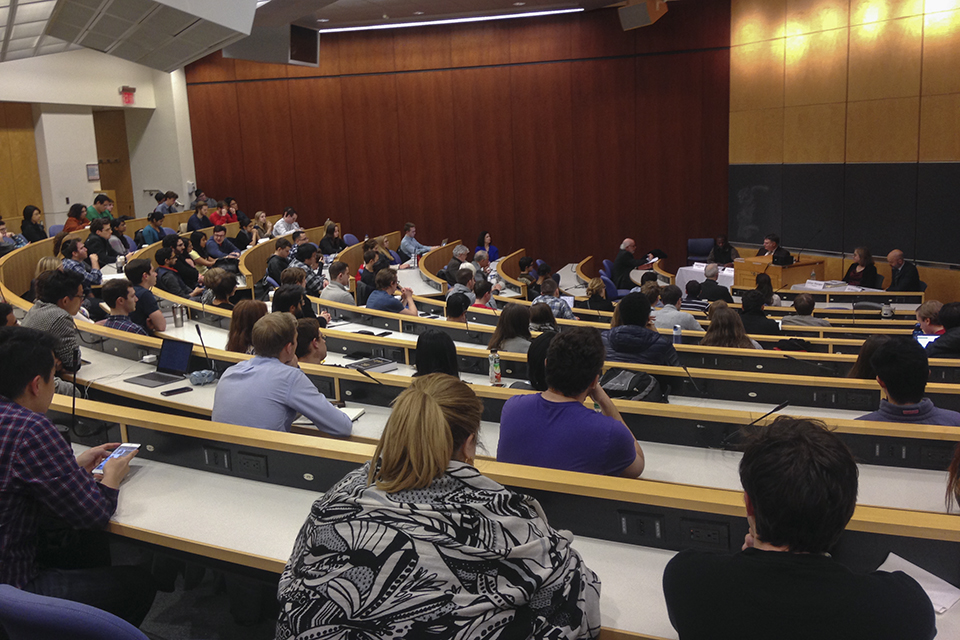 Almost 150 students and faculty filled a lecture hall Wednesday night to reflect on the legacy of Supreme Court Justice Antonin Scalia, who died on Saturday.

A panel of five professors from the Law School—Tom Merrill, Gillian Metzger, Jamal Greene, Ed Morrison, and Nathan Lewin—analyzed Scalia's lasting impact in law and eulogized him for his personal impact on their lives.

Scalia, who spent 30 years on the Supreme Court, was noted for his advocacy of an originalist interpretation of the Constitution, flamboyant writing that included phrases like "jiggery-pokery" and "applesauce," and outspoken conservatism. This legal panache ensured Scalia a place of public prominence despite the court's often low profile.

When Americans were asked to name a justice in recent years, it was Scalia who invariably came to mind. In spite of this, the panel unanimously agreed that Scalia's influence in the court's decisions was less than his reputation might have suggested.

"Somewhat surprisingly, I think he was not that effective at patching together coalitions of like-minded people," Merrill said. Scalia rarely wrote the majority opinion in highly contested decisions.

This was in no small part due to his writing, Merrill said, which was so pointed on certain issues that Scalia alienated other justices and was thereafter never assigned to write for the majority for those issues. Nevertheless, the way Scalia's passion came through in his writing was also lauded by other panelists.

"I don't know a con-law [constitutional law] teacher who hasn't found Justice Scalia's prose to be either a foil or a teaching tool in class," Metzger said in an interview. "He had a remarkable ability to explain very crisply and powerfully in a way that really grabbed students."

Morrison, who clerked for Scalia, attributed this pugnacious style to the way Scalia thought about law.

"For him, debate, combat, was an important way to identify what are the important issues in a case—what are the potential weaknesses," Morrison said in an interview. "Before oral arguments on any case, we four clerks would get into his office and debate him on the cases."

This adversarial approach might have alienated other justices from accepting Scalia's positions and damaged the way oral arguments were conducted, Greene said, but it still affected the way other justices operate.

"If I wanted to put a finger on his real legacy, it'd be that. It's not that he won adherents over to his views—originalism is not that popular on the court—it's that he made his opponents sharp and transparent in the way they have to do things," Greene said. 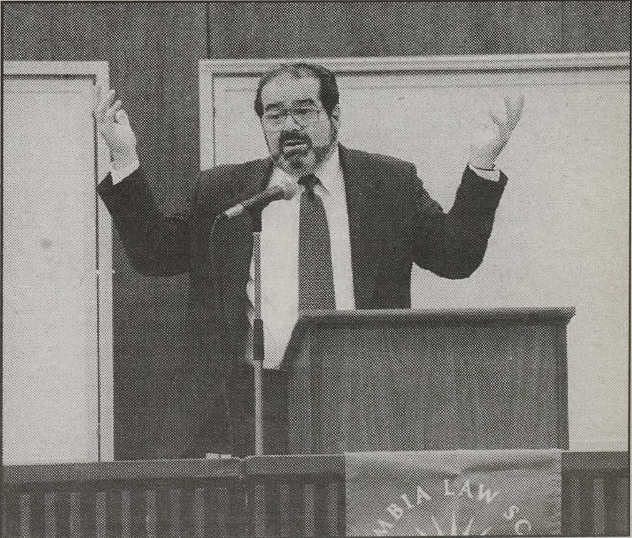 In District of Columbia v. Heller, a landmark case that defined the Second Amendment in modern times, Scalia made his case with what he stated was an originalist argument and asserted that the original meaning of the statute's words supported a citizen's right to bear firearms.

The dissenting opinion issued by Justice John Paul Stevens, a liberal figure on the court, disagreed sharply with the extent of the protection Scalia supported. Unusually, Stevens, who was by no means an originalist, also examined the issue of the right to bear arms from an originalist perspective.

"That just shows how much he brought considerations of originalism and originalist methodology into the mainstream," Metzger said in an interview. "I'm not an originalist … but I think anyone who's a con [constitutional] scholar has to account for the role of originalism."

Scalia also shaped what it meant to be a justice on the highest court in the land, according to Greene.

"There was a time when all you looked for was someone who carried a briefcase and was loyal," Greene said. "I think the Harriet Miers debacle showed us that, in a modern age, you need someone who can keep up with Justice Scalia."

David Axelrod—a former advisor to President Barack Obama, CC '83—eulogized Scalia in a CNN op-ed in which he revealed that Scalia did not ask for someone like-minded to replace retiring Justice David Souter, but instead suggested his ideologically antithetical friend Elena Kagan, who later became a justice on the court.

"He loved you more if you disagreed," Morrison said in an interview. "What he did not want in a clerk was someone who agreed with him too much, or someone who disagreed but wouldn't debate—he really liked conflict."

Reflections from both Morrison and Lewin had strongly personal tones as well, in addition to their analysis of his legal legacy.

"Working for Scalia was like working for my dad—he was really loving, but he had huge expectations," Morrison said.

Lewin told an anecdote about bringing liberal law students to meet Scalia, only to have their opinions change.

"He was a lovable, remarkably open person who was intellectually honest," Lewin said, but immediately added, "I thought he wrote a terrible opinion in the case of Oregon v. Smith."

After the panel concluded, one attendee called attention to Scalia's more controversial statements about homosexuality and how African-American students would probably do better by attending less competitive schools.

"How do we balance out his presence on the Court with the impact of his words?" the attendee asked.

Greene, who himself is black, took the question first.

"Justice Scalia was a very conservative man. I have no doubt that he voted for Republicans," Greene said to nervous laughter. "And he was often—from a progressive perspective—insensitive to minorities, to people who didn't share his worldview, or people who had practices that were unorthodox. "

In a closing statement, Metzger followed up Greene's comments on Scalia's controversial side.

"It is important to realize that he was a colossal figure in American public law, and also acknowledge the flaws that some may see," she said. "We have to be able to make both of those points."