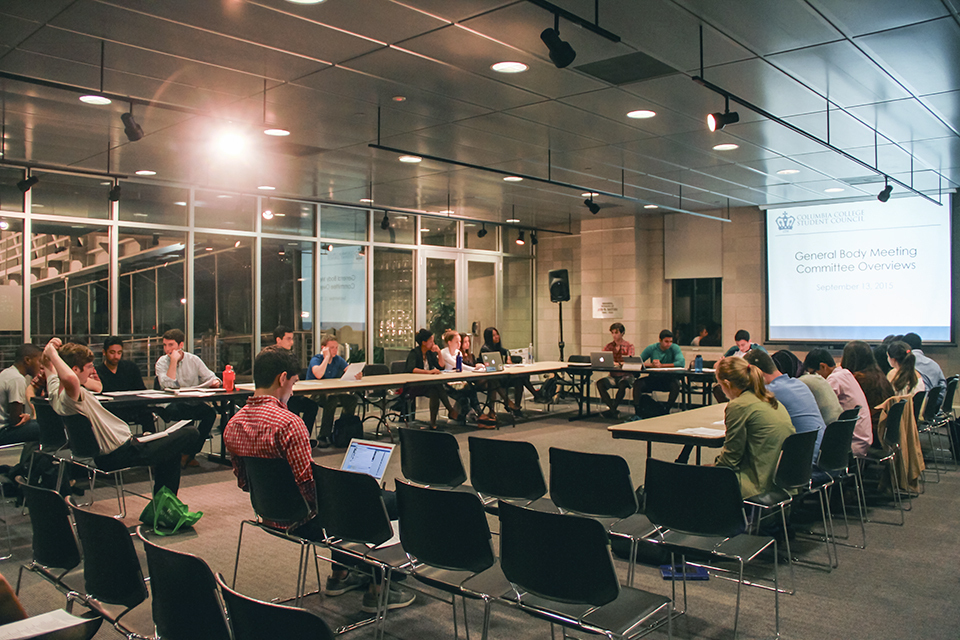 Columbia College Student Council issued a formal apology to both the Black Students' Organization and students of color at Columbia following controversy over a proposal looking to address issues of race and diversity.

BSO members had attended CCSC's general body meeting on Sunday to express frustration about technical errors made in the document, as well as to challenge the fact that groups representing underrepresented minorities were not given a chance to participate in the authoring of the proposal. The document was authored by Pre-Professional Representative Chris George, CC '17, on behalf of the council and presented to Dean of Columbia College James Valentini as one of the five most critical issues facing Columbia College students.

The council recognized that BSO and other student groups should have been involved in the authoring of the proposal and called for a broader conversation about minority safe spaces to take place, adding that the council's initial proposition to expand access to the Malcolm X Lounge—a suggestion that BSO had expressed concern over on Sunday—was based on student responses to a school-wide survey.

CCSC also admitted that it had erroneously proposed some ethnic studies classes to be added to the Global Core requirement when these classes already may fulfill the requirement. The error was attributed to an editing mistake.

The statement brought up that CCSC had reached out to BSO in early February, and said that it wasn't enough time to allow for a thoughtful response.

"Moving forward, we'll be redrafting the proposal on race and diversity and we'll be involving students of color more directly in that process. We'd like to thank the students of BSO for keeping us accountable as we should be," the statement said.

The statement can be read in full here:

On Sunday, members of the Black Students' Organization (BSO) visited our general body meeting to discuss our proposal on Issues of Race and Diversity. They alerted us to two main types of failures on our part: (1) technical errors in the content of the actual proposal and (2) our lack of effort in reaching out to students of color to solicit input while drafting it. We're deeply sorry for both the content errors and our failure to properly reach out to marginalized students.

The idea, which BSO objected to, under the proposal's subsection "Improve Accessibility to and Expansion of Safe Spaces for Minority Students" that the Malcolm X Lounge be made accessible to more students of color was based on responses to our school-wide survey in which some students of color suggested that the Malcolm X Lounge be more accessible to marginalized students outside of the few student groups, including BSO, that currently have access to it. These survey responses alongside Sunday's discussion with BSO show that there is clearly a broader conversation to be had about spaces for minority students on campus. In addition to soliciting survey responses, we should have reached out to have that discussion with BSO and other marginalized students.

These mistakes shouldn't have happened; we're sorry they did, and we'd like to thank the students of BSO for drawing our attention to them. Moreover, they would have been caught and avoided if we had properly solicited input from students of color in the first place. The extent of our outreach for the Issues of Race and Diversity proposal consisted of (1) the school-wide survey sent out by President Ben Makansi twice in December which allowed students to describe the most important issues that they face and whose responses we weighted heavily, and (2) Reaching out to the President of BSO in early February, which didn't allow enough time for a thoughtful response.

We collectively put in countless hours to combing through over 100 detailed survey responses and tried to craft demands based on those responses and our own research on them. For issues like academics, advising and administrative transparency, this process makes sense. However, we should have known that relying on survey responses and reaching out so late in the process were insufficient in addressing something as complex and important as race and diversity. Moreover, we should have reached out to other marginalized student groups in addition to BSO because the totality of the experience of students of color on campus cannot be fully encompassed by the opinions of one student group.

Again, we sincerely apologize for the blunders in the content of the proposal and the lack of involvement of marginalized students in drafting it. Students of color, precisely because they are marginalized, should have been actively reached out to in greater number from the beginning. Moving forward, we'll be redrafting the proposal on race and diversity and we'll be involving students of color more directly in that process. We'd like to thank the students of BSO for keeping us accountable as we should be.