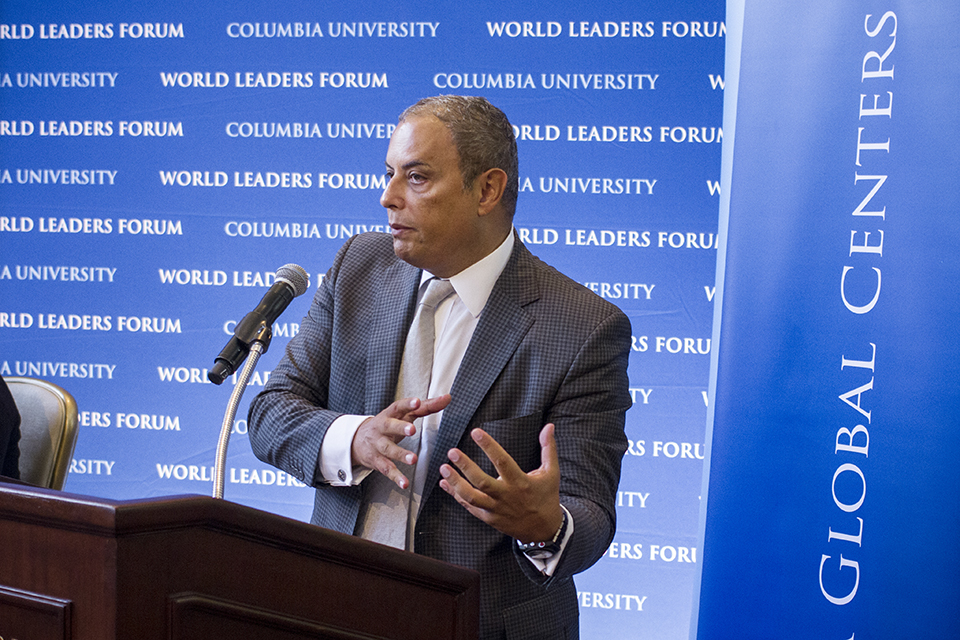 Executive Vice President for Global Centers Safwan Masri may be faced with a tough situation concerning Columbia's global center in Istanbul, as faculty petition to pull out of Turkey.

More than 30 faculty members urged University President Lee Bollinger to publicly denounce the violations of academic freedom and free speech committed against academics by the Turkish government in a letter sent to Bollinger on Monday.

Spearheaded by Rosalind Morris, professor of anthropology, the letter asks Bollinger to align the University behind Turkish intellectuals being persecuted for signing a petition denouncing the military's campaign against Kurdish militants. Upon receiving the petition, Turkish President Recep Tayyip Erdo?an denounced the academics, resulting in the detention of many as well as threats against them from organized crime figures.

The petition also urges Bollinger to suspend operations of Columbia's Istanbul Global Center in the event that restrictions on academic freedom and freedom of speech are not improved.

"Columbia's longstanding engagement with the students and scholars of Turkey, its partnerships with important universities in that country, and its operation of a global center as well as several courses in Istanbul, make it imperative that Columbia join scholarly associations, such as the Middle East Studies Association, the Modern Language Association, the American Anthropological Association, and others around the world in speaking out," the letter said.

"Columbia's commitment to academic freedom and your own support for free speech makes a public declaration in opposition to the Turkish government's recent actions urgent and appropriate."

Morris offered no further comment to a Spectator inquiry than what was written in the letter.

Bollinger replied to the faculty members' letter on Monday. In his response, Bollinger expressed a willingness to engage with faculty on the matter.

"Let me just say, Rosalind, that I would, as always, be happy to meet and talk about what we might do here and more broadly," Bollinger wrote.

Bollinger, given his background studying first amendment law, has spoken out about freedom of speech issues in the past.

"On many, many occasions, I have expressed opposition to these violations of internationally recognized rights, both here and whenever I have been in Turkey, through speeches, lectures, private meetings with government officials, and interviews with major print and broadcast media," Bollinger wrote.

However, Bollinger did not commit to making a public statement against these violations at this time.

"I have been actively thinking about finding the appropriate moment in the near future to, once again, address these grave problems," Bollinger wrote.

However, in that letter, Bollinger did commit to creating a University body to advise him on responses to this and other threats to academic freedom in regions where the University is active.

"With respect to the possibility of suspending operations in our global center in Istanbul, you are right that this should be considered in the first instance by a University-wide committee set up to advise me about what should be done in these and other circumstances. As you know from serving so constructively on the global forum committee, we need principles and guidelines on these matters developed over time by a deliberative University body. I am committed to establishing such a body, and I very much welcome ideas," Bollinger wrote.

At a fireside chat held recently for undergraduates, Bollinger discussed Columbia's global centers. The centers operate as outposts, helping to facilitate relationships with foreign institutions and coordinate research and events in the regions they serve. Bollinger noted that one advantage of the global center model over the establishment of larger branch campuses was the ability to quickly suspend and resume operations in instances where academic freedom is compromised.

"Many of these countries do not have the same degree of free speech and press rights as we do, and academic freedom, and my feeling is that you have to be prepared to leave instantly," Bollinger said. "I mean, if they start restricting academic freedom of Columbia in one of the places we have a center, we're done. We're out of there. We close shop. We can be out in a number of days. We can be out in 24 hours."

Marianne Hirsch, the William Peterfield Trent Professor of English and Comparative Literature, member of the Istanbul global center faculty steering committee, and a signatory on the letter, hopes that the events won't continue to the point where the University has to stop activities at the global center.

"The global center is really Columbia in Istanbul. And I think the more involvement we have as universities that practice academic freedom, the better," Hirsch said. "So we hope that the center will continue and that the center will be a place where the kind of academic discussion that we stand for can take place."

Todd Gitlin, professor and chair of the Ph.D. program at the Journalism School and a signatory on the letter, feels that a formal statement from Bollinger has the potential to carry a lot of weight with the Turkish government.

"A formal statement would be very good because the Turkish government, for all their sins and abuses, is a NATO ally," Gitlin said. For all their bombast and pomposity, they must pay at least passing attention to American condemnations."