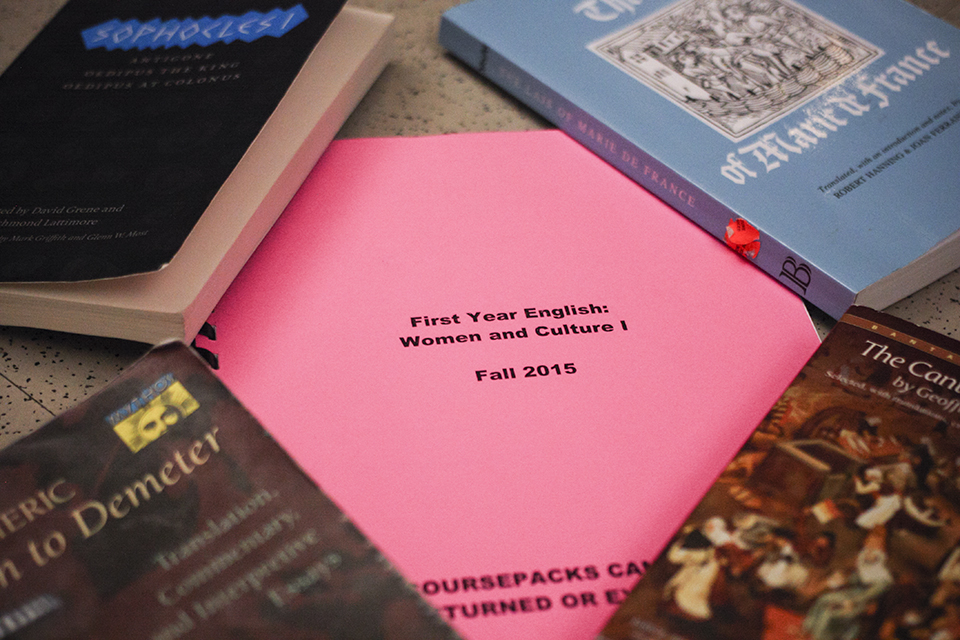 Some of the literature covered in First-Year English will be cut in order to emphasize writing and the writing process as the program becomes First-Year Writing.

Barnard's new First-Year Writing program, which is set to replace First-Year English, will provide students entering Barnard this fall with pared-down syllabi in exchange for a greater emphasis on writing technique.

The revamped program, which will launch next semester with the rest of Barnard's new general education requirement, Foundations, comes as a result of a nearly two-year curricular review. Feedback gathered from curricular review sessions, which were conducted with students and faculty across all departments, indicated that there was a desire for students to have greater writing instruction in their first years at Barnard.

The First-Year English program, directed by English lecturer Wendy Schor-Haim, who took over from senior lecturer in English Margaret Vandenburg last semester, worked with the program's faculty to take the curricular review committee's mandate and adapt a new course.

The original program, developed by Vandenberg in 1998, was described by her in an essay published in "Integrating Literature and Writing Instruction" in 2007 as enabling "students to write effectively across the curriculum."

Schor-Haim said that this was still the goal for the new First-Year Writing program, which she sees as a "continuation of the program" from First-Year English.

"It's really important that we're all very conscious that we're preparing students for writing across all of the disciplines," Schor-Haim said, adding that the pedagogy is focused on "analytical skills that lead to the development of good essays."

This year's syllabi for the three First-Year English rubrics are transitional between the former and future models, with fewer books and a greater focus on writing instruction compared to past years. Schor-Haim said that brief writing exercises and assignments will also be more important in the new program.

"That [short assignments] is the place where a student can, in a very low-stakes way, figure out what she thinks," she said.

Though more writing-intensive, the new course is not expected to mirror the methods used in Columbia's University Writing program, according to Schor-Haim.

"One of the hallmarks of the way that we teach writing at Barnard is that we teach it through engagement with really meaningful content, and that content is literary texts," Schor-Haim said.

"I wouldn't really like that [a writing intensive course] as much, because I really feel like the discussion is really important," she said.

"I think that that's [First-Year Writing] a good idea, but I don't want to lose the essence of what First-Year English is," she added. "I feel like it's a way to connect with your peers."

Christine Forbes, BC '19, said that she also felt that most of the value in First-Year English comes from its discussions, rather than its written assignments.

For Sgouros, the implementation of more frequent, brief papers could be difficult under the time constraints of the first-year program.

"If we read something more like short stories or short excerpts, if we wanted to have a more intensive writing class, I think that's what would be needed instead of reading a large volume of things," Sgouros said.

Schor-Haim said that the new First-Year Writing curriculum will look to address this concern by reducing the number of texts on each syllabi, which are standardized across sections for each of the three courses, in order to make room for more writing assignments—something that has already begun this spring semester.

For example, some Legacy of the Mediterranean syllabi have removed J. M. Coetzee's "Waiting for the Barbarians."

Though Schor-Haim said that the cuts to the syllabi have not yet been finalized, deciding which texts to eliminate off the curricula has been a difficult but necessary task, especially given the brevity of the semester.

Still, Schor-Haim said that the discussion elements of the First-Year English program aren't expected to change as the course shifts toward its new identity.

"We'll always be reading excellent texts, we'll always be talking about them in critical ways," she said. "Those conversations will remain a centerpoint of the class for sure."

Correction: A previous version of this article stated that students in adjunct English lecturer Georgette Fleischer's Women and Culture First-Year English class do not have Gertrude Stein's "Doctor Faustus Lights the Lights" listed on their syllabus. In fact, it is included. Spectator regrets the error.