For students with disabilities, range of obstacles diminishes access to residence halls

For students with disabilities, range of obstacles diminishes access to residence halls 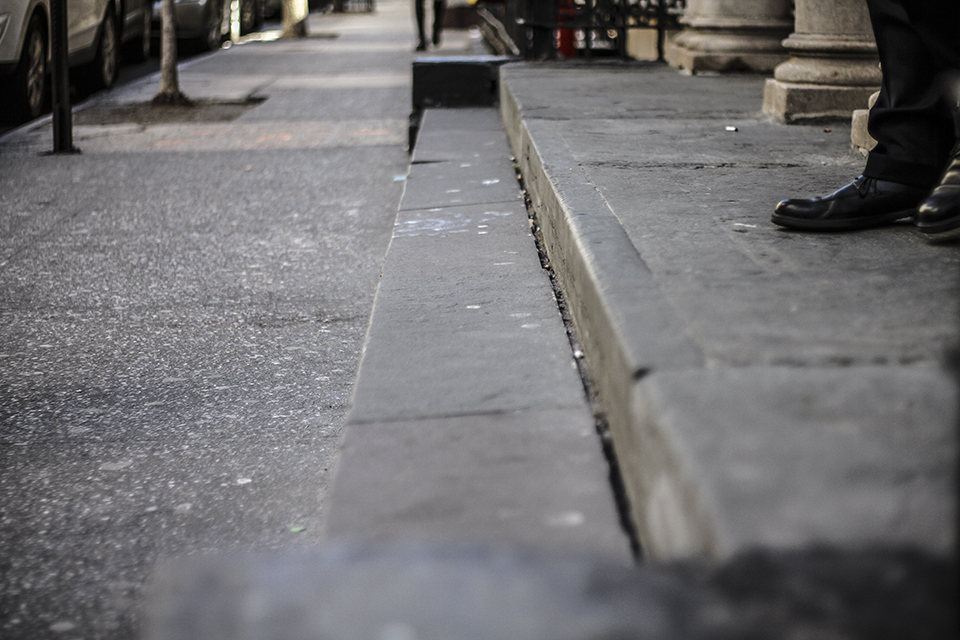 McBain Hall is one of a number of residential halls which has steps leading to the entrance of the building, hindering the access of people with limited mobility.

Eun Byoul Oh, CC '18, has a list of residential halls that she has learned to avoid—a list which already takes into account the fact that more than a third of undergraduate dorms are wheelchair inaccessible.

Many factors can cause a dorm to be inaccessible, including narrow hallways, small elevators, and a lack of automatic doors. But for students like Oh, these unexpected obstacles reflect a greater problem at Columbia: Instead of being informed by the University about these aspects of accessibility on campus, the onus is often placed on students with disabilities to find out for themselves.

Of Columbia University's 19 undergraduate residential halls, eight are completely inaccessible via wheelchair. And although the University considers the remaining 11 to be wheelchair-accessible residential halls, five lack an automatic door at the front entrance—one of the many features that students with limited mobility said can act as barriers.

Obstacles to accessibility vary from building to building. Harmony Hall has a wheelchair-accessible entrance but an inaccessible elevator located in a stairwell behind a door, whereas Woodbridge Hall has a permanent ramp installed in the lobby but three steps outside the main entrance. 47 Claremont Avenue has a door with a handle approximately four feet high and three steps to the street, yet has a ramp installed in the vestibule.

Oh said that, in her experience, buildings that are classified as accessible but do not have automatic doors really should not be considered accessible.

"A lot of people don't know this because they think we can just push the door, but for some people, it's not easy," Oh said. "It's a concern that needs to be addressed, but nobody really cares." 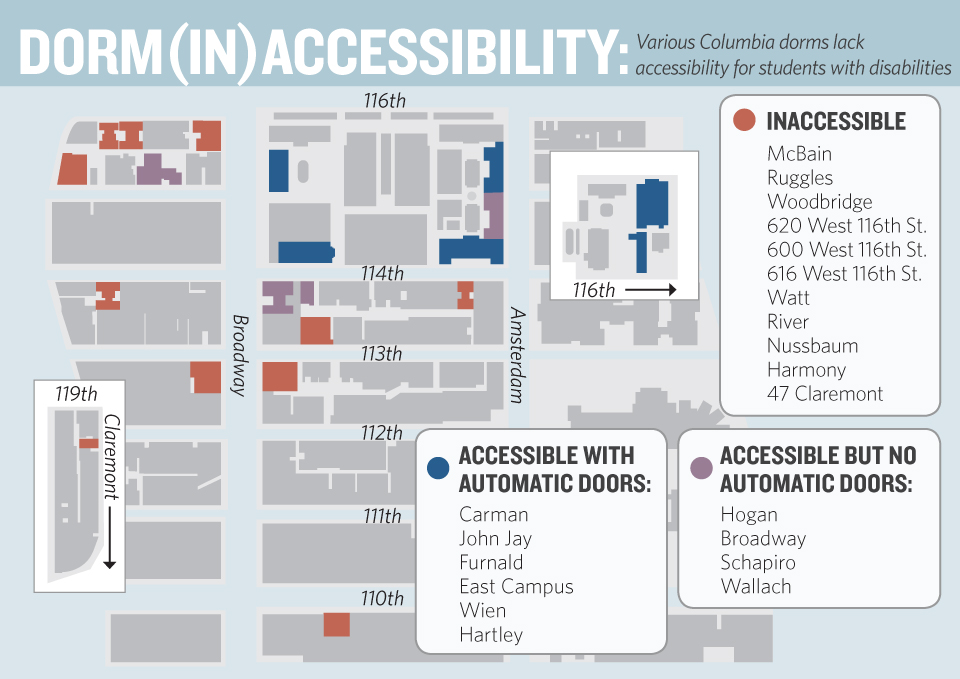 For the past two years, Oh has lived in Furnald Hall, which is one of the few dorms—along with Carman, East Campus, John Jay, and Wien—that has automatic doors.  But Oh said she still has to navigate non-automatic doors when she visits friends in other dorms.

"If someone else goes out or comes in it's lucky. But if not, I have to try to kick it open," Oh said. "Last time I was trying to get in [to Wallach Hall] by myself, it was at least six times trying to get the door open. I know some people might say, 'Well, don't go to Wallach then,' but my friends are there."

Both Sarah Kim, BC '17, who uses a wheelchair, and Jess Silfa, GS '16, who walks with a cane, said they agree that automatic doors are a significant factor in accessibility.

"Automatic doors are necessary," Kim said. "If there isn't one, I can't even go in there."

"Having to open the door is a huge issue even for me, and I'm not in a wheelchair," Silfa said. "When there is no automatic door or the automatic door breaks, it's such a pain in the butt. You have to just wait for someone to come along and open it for you. It's hard."

But under the Americans with Disabilities Act, the University is not legally required to have  automatic doors in order for buildings to be considered accessible.

Vice President for Campus Services Scott Wright said that automatic doors are not installed in many buildings because they are more likely to break than regular doors.

"You watch able-bodied people going into John Jay who don't just use the [automatic door] panel—[they] kick it, punch it, hit it over and over again, never thinking about the fact that students with mobility issues, that's their only way into the building," Wright said. "We would always prefer to have something, if at all possible, that couldn't break."

Still, Wright acknowledged that ADA regulations should generally not serve as guidelines for Housing facilities.

"When someone says it's ADA-compliant, that doesn't mean the individual who's looking to use it can," Wright said. "So we modify wherever possible to the specific condition or disability that a student needs to have accomodate."

"When people do get in accessible housing, it can be very different from the rest of your community. Freshmen can be put in senior dorms or somewhere where there aren't a lot of freshmen, because they're more accessible," Silfa said. "But then you kind of miss out on this experience."

Additionally, students with disabilities said that even if Housing provided adequate accommodations in their own residence halls, they were left to find out for themselves—often the hard way—which other residential halls were truly accessible.

Oh said she has a class on the first floor of Carman and that at one point, when the lobby restroom was closed, she ventured into a classmate's residential suite, which was difficult to navigate.

"I was fortunate enough that a girl in my class gave me a key to her suite, which was very generous of her," Oh said. "But once I got into the hallway, I could barely move. I could barely turn or make it in or out. The suite hallways are so narrow."

And on multiple occasions, when Oh attempted to visit Broadway Hall, which has an enclosed wheelchair lift, she said she found herself trapped inside the lift due to a missing handle on the inner door.

"The problem I've experienced three times is that I wasn't able to get out of the lift on the other floor. Even though I was up in the lift, the doorknob that should have opened the door to the outside wasn't there," Oh said. "I felt like I was trapped."

University Senator Grace Kelley, Nursing '17, who currently chairs a subcommittee of the senate's Student Affairs Committee focused on disability issues, said she believes that there needs to be systemic change on campus in order to ensure that unexpected obstacles like these do not occur.

"It seems like there's a pattern of students having to accommodate for themselves, and sort of self-organize, and it shouldn't have to be that hard," Kelley said. "There should be more systems in place so that that's less of an energy suck for those students and they can focus more on their academics or every other college things."

Kelley and subcommittee member Josh Schenk, CC '19, said that a recent quality of life survey revealed that students with disabilities have a higher level of perceived discrimination than any other subgroup of students, which Schenk said he believed stemmed from a lack of accessibility.

"When I saw the data I was completely shocked, and it really is concerning," Schenk said. "There's no reason that any students shouldn't be able to participate and access anything and everything that they want to."

Wright acknowledged that, for many residential halls, the only barrier to accessibility is a small number of steps at the entrance. But despite this, Wright said that installing a wheelchair-accessible entrance is often impossible.

"You couldn't really bring a ramp out and block a sidewalk, I assume, without New York City permission," Wright said. "Your options would be to either come up with another way to get into the building or ... go through and wipe out the floor of the building and bring it down to street level, and currently something like that is cost-prohibitive."

But Wright said that Housing is continuing to seek out ways to increase accessibility to residential buildings, such as the upcoming installation of a permanent ramp at the entrance of Ruggles Hall.

But for students like Oh, there is still more for Columbia to do.

"It's a flip of a coin: We love this place, but we hope in the future we will suffer less," Oh said. "We know how much suffering we can bear, but we hope that Columbia won't add to it."

Correction: A previous version of this article stated that Harmony Hall does not have an elevator. In fact, it has one located in a stairwell behind a door. Spectator regrets the error.