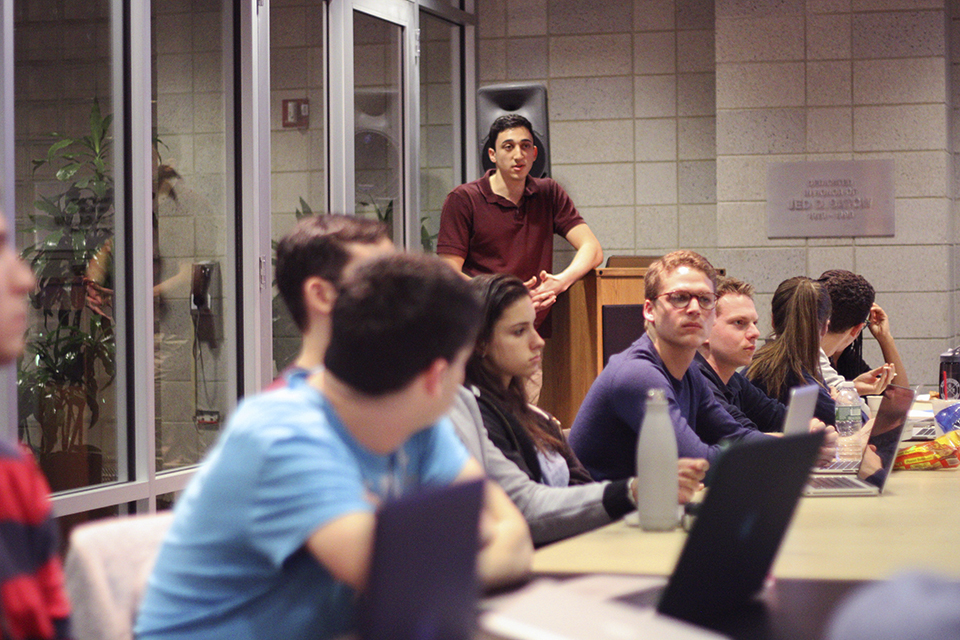 Columbia College Student Council members debated whether to move forward on developing a plan to improve the Universitys response to sexual assault if No Red Tape declines to work with them.

Columbia College Student Council members debated whether to move forward on developing a plan to improve the University's response to sexual assault if No Red Tape declines to work with them, given that the two organizations have not seen eye to eye on which strategies would be most effective.

Members of NRT presented the group's SAAFE petition to CCSC two weeks ago in the hope that the council would publicize it via email. CCSC President Ben Makansi, CC '16, instead proposed that the council present the group's demands to administrators as a more effective means of enacting the demands listed in the petition, but NRT members declined the offer.

NRT has since issued a statement accusing the council of inaction, which Makansi disputed at the council's general body meeting on Sunday.

"NRT's statement that we are not taking action on this is false. We are taking this seriously, it's just that we can't vote on a whim to support it. We have to do our research," Makansi said.

Class of 2018 President Ezra Gontownik and Vice President for Finance Sameer Mishra, CC '16, said that CCSC should be committed to improving the lives of survivors, regardless of whether NRT or the council takes credit for the action.

"I don't think anyone here cares for the credit. We care for the solutions," Gontownik said.

"If NRT doesn't want to work with us, that's unfortunate, but they're not the only people who can work on this issue on campus," Mishra said. "That doesn't mean that we can't come up with some really soluble points that we as a body agree upon together that come from us, and not from another organization."

Mishra also suggested that CCSC could create a task force for developing an action plan that addresses sexual assault response.

But Equity and Inclusion Representative Ewoma Ogbaudu, CC '18, suggested that co-opting the demands of a student organization without their input could be "a slippery slope."

"Without these marginalized voices [as] a part of the conversation, we perpetuate the bureaucracy that these students deal with on a daily basis," Ogbaudu said. "We have a fundamental obligation to support this group because they represent a large section of sexual violence survivors. The onus shouldn't be on this group to create a full, extensive action plan that works 100 percent of the time."

Class of 2018 Representative Nathan Rosin expressed concern that some of the petition's points—such as the petition's call for more robust prevention programs and funding for mental and physical health services—were too vague to implement effectively, since they were too closely related to already existing services and policies at the University.

"We may be supporting people proposing things while we don't necessarily know what it might end up manifesting itself as," Rosin said.

Members of the council will be meeting with Executive Vice President for University Life Suzanne Goldberg this week to preliminarily research some of the action items listed in NRT's petition.

While no official vote was made during the meeting, Makansi asked the council not to unilaterally support the SAAFE petition due to issues raised about its demands and whether supporting it could endorse NRT's support of anti-Israel groups. Makansi said he is "leaning towards" acting on the issue, regardless of whether NRT ultimately chooses to work with the council.

"I'm of the opinion that we can't support the petition outright—we have to take each item independently and evaluate it on its own terms," Makansi said.

Makansi announced that 35 student groups representing underrepresented identities on campus have been invited to participate in a meeting this Thursday to redraft the controversial race and diversity proposal given to Columbia College Dean James Valentini. The Black Students Organization had challenged the proposal at last week's CCSC meeting for failing to include input from student groups, for which CCSC issued a formal apology.

After attending 1vyG—a conference held last week at Harvard to discuss issues facing first-generation Ivy League students—Ogbaudu announced he had met with Associate Dean of Multicultural Affairs Melinda Aquino to advocate for the creation of a first-generation student alumni network.

"A lot of our partner institutions have this—MIT has had a first-generation alumni network for seven years, Harvard has for a long period of time as well, so we definitely need to meet up with the curve on that regard," Ogbaudu said.

CCSC also debated a resolution to add a technology representative as an at-large member to its board. The resolution stems from issues the council experienced while designing its recently launched website, which fell mostly on the shoulders of Vice President for Communications Grayson Warrick, CC '16. The council will decide whether the position should be appointed or elected and have voting privileges next week.

In keeping with the comedy ticket upon which Makansi and Vice President of Policy Vivek Ramakrishnan, CC '16, were elected, CCSC also passed a resolution to make Cannon's, a bar on Broadway and 108th Street, "accessible to students beyond Columbia freshmen and Manhattan College people."