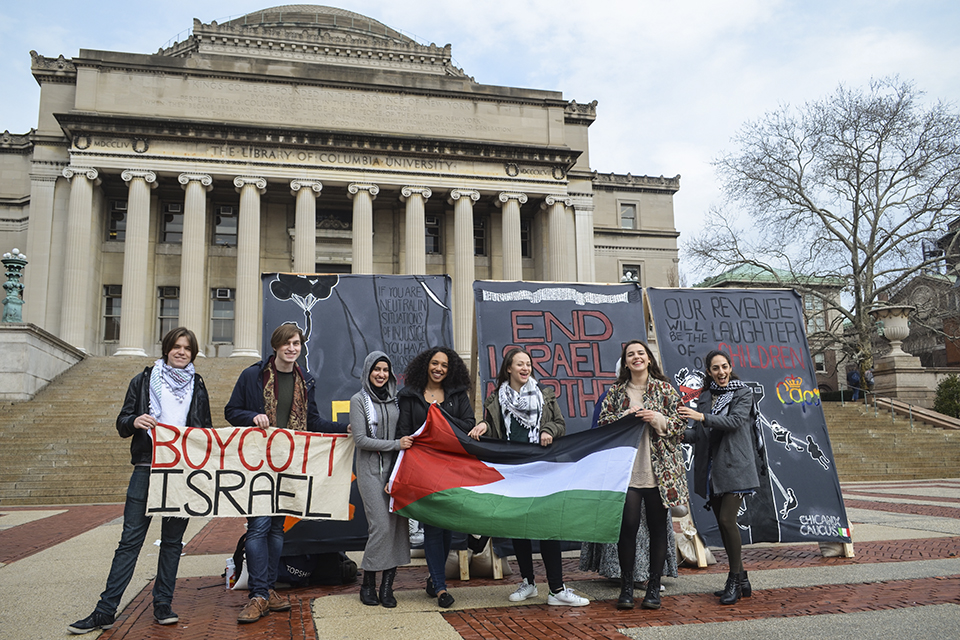 Members of Columbia Students for Justice in Palestine pose with their mock apartheid wall on Low Plaza Monday.

Forty faculty members have signed a petition calling upon the University to "divest from corporations that supply, perpetuate, and profit from a system that has subjugated the Palestinian people."

The petition, released Monday morning on the first day of Israeli Apartheid Week, notes that the signatories are in solidarity with student groups Columbia University Apartheid Divest, Students for Justice in Palestine, and Jewish Voice for Peace. CUAD demanded in February that Columbia divest from eight specific corporations "that profit from the State of Israel's ongoing system of settler colonialism, military occupation, and apartheid law" as part of the boycott, divestment, and sanctions movement.

"As both scholars and community members, we are professionally, intellectually, and morally invested in our University. We deem it our duty to hold our institution accountable for the ethical implications of its own actions, notably its financial investments and their implications around the world," the petition said. "In particular, we take issue with our financial involvements in institutions associated with the State of Israel's military occupation of Palestinian lands, continued violations of Palestinian human rights, systematic destruction of life and property, inhumane segregation and systemic forms of discrimination."

In 2002, a group of 74 faculty members drafted a similar petition, calling on the University to divest from companies that manufacture and sell military hardware to Israel. As a policy, the University does not comment on specific holdings in its endowment portfolio.

Anthropology and Middle Eastern, South Asian, and African studies professor Partha Chatterjee, who signed the petition, said in an email that he wanted to protest Israel's security regime, which "virtually amounts to apartheid."

"I fully support every effort to put pressure on the Israeli government to end its illegal occupation of Palestinian lands," he said.

English professor Bruce Robbins, another signatory, compared CUAD's campaign to efforts in the 1970s and '80s pushing for divestment from apartheid-era South Africa, noting that many opponents labeled these efforts as "too radical" at the time.

"I have also seen what it's like for Palestinians on the West Bank to live under the occupation," Robbins said. "Once you've seen that, and you are offered a form of non-violent protest that is also endorsed by Palestinian civil society, it seems like a no-brainer."

Dirk Salomons, senior lecturer at the School of International and Public Affairs, said that he hopes that divestment can serve as a symbolic measure to push Israel to become more aware of the needs of its neighbors.

"One gets used to injustice, and when it goes on long enough, sometimes one takes it for granted," Salomons said. "As a gesture, it's supposed to make Israelis think, 'What are we doing? Where are we heading? Is this really who we want to be and how we want to relate to our Arab neighbors?'"

"I've always had a feeling as a Jew that a Jewish state should rise slightly above the lack of morality of its neighbors," Salomons added. "It pains me to see how a country which I love and which I have visited many times can be so blind to the needs of its neighbors."