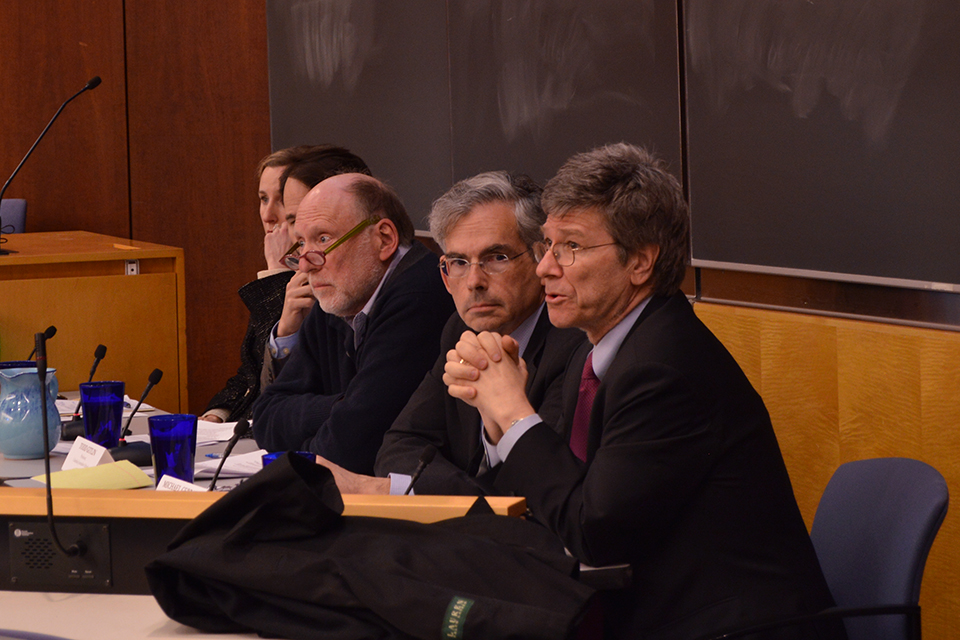 From left to right: Todd Gitlin, Journalism School, Michael Gerrard, Director of the Sabin Center for Climate Change Law, and Jeffrey Sachs, Director of the Earth Institute, participate in a discussion on Columbia's responsibilities to act on climate change.

Thirty faculty members from the Earth Institute, including Director Jeffrey Sachs, signed a statement released on Tuesday that recommended the University divest from coal and direct any remaining fossil fuel investments to companies that are transitioning to renewable energy.

Faculty members requested that any fossil fuel company that the University remains invested in should subscribe to the goals outlined by the COP21 Climate Conference in December—where 196 countries pledged to hold global temperature increases at 1.5 degrees Celsius—as well as publish and implement its plans to transition to low-carbon energy resources.

The faculty also call for these companies not to participate in anti-climate policy lobbying or the exploration or development of "unconventional reserves" such as tar sands, and should not reject the scientific consensus on climate change.

The statement, which also urged Columbia to devote resources to improving sustainability on campus, was released shortly before a panel discussion about Columbia's relationship to global climate change.

Sachs, who was featured on the panel, strongly advocated for divestment and encouraged students taking the lead on the issue to continue pressuring the University to manage its investments in a socially responsible manner.

Columbia Divest for Climate Justice, a student activist group advocating for Columbia to divest from fossil fuels, has submitted a proposal for divestment to the Advisory Committee for Socially Responsible Investing, which ACSRI rejected in November.

In addition to moral implications, Sachs also supported divestment from an economic standpoint.

"Even from a purely financial point of view, a financial analyst would have to be pretty blind to think that this is a prudent investment," Sachs said. "If we had done this three years ago, we would have been much better off."

Sachs's public support of divestment is notable given that his stance on the issue had previously been unclear. In March 2015, Sachs had declined to sign an open letter written by over 300 faculty members addressed to University President Lee Bollinger and the board of trustees, which called on the University to divest from fossil fuels.

Referencing the demands of the Earth Institute faculty statement, Journalism School Professor Todd Gitlin also strongly recommended divestment, as it could set an example for other investors.

"The University has a responsibility not simply to level these demands on corporations, but actually to take seriously the public service portion of our mission," Gitlin said.

But Business School professor Bruce Usher, who also did not sign the March 2015 open letter, stated that reinvestment in renewable energy sources would be more effective than fully divesting from fossil fuels.

"The solution is not divestment, it's investment. We need to be investing in renewable energies," Usher said. "Divestment alone is worse than no divestment at all. Divestment with investment is really powerful."

However, both Usher and Earth Institute Faculty Chair Michael Gerrard, CC '72, suggested that it could be hypocritical for the University to divest from all fossil fuels as long as it remains dependent on them for energy and transportation.

"One of the ironic things about the focus on fossil fuel companies is that they're not the ones who burn it," Gerrard said. "They [fossil fuel users] also should be the subject of shareholder activism."

Overall, the panel was in agreement that at least some amount of timely divestment action was necessary to preserve both the University's economic interests and its public image.

"Those who do not make a moral statement fairly soon will find themselves on the wrong side of history," Usher said.